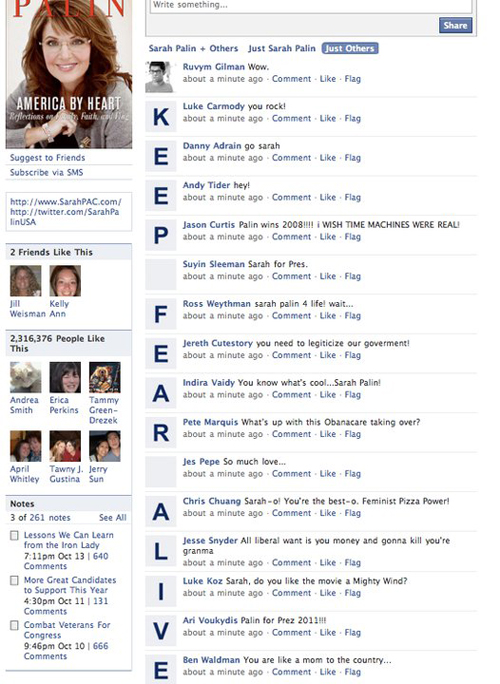 A group of Facebook users who are evidently not fans of Sarah Palin (and probably are fans of Stephen Colbert) have orchestrated a crafty “letterbomb” campaign on her Facebook wall. If the message isn’t obvious enough already … well, the real message is in the profile pic column, not the comments about “feminist pizza power.”

Evidently, Glenn Beck and Fox News were letterbombed as well.

All Facebook explains how you too can letterbomb, using a zip file of standardized letters and a group of friends:

The letterbombing idea was the brain child of Jeff Greenspan, Chris Baker and Danny Adrain at ad agency BBDO but it didn’t really take off for corporate ad campaigns so they decided to use it for their own amusement instead. Anyone who wishes to try letterbombing for themselves can download the tools – a zip file with the letters – from letterbombing.comand then gather a group of friends together to pull the prank.

The letterbombing website has a video on how to do this, which we have embedded below. The video is entitled “Letterbombing in Colbert’s name”, though a Colbert spokesperson told USA Today they didn’t endorse vandalism.