Sara Ganim, 24, Becomes One of the Youngest Winners of the Pulitzer Prize For Local Reporting

For her work covering the sex abuse scandal at Penn State, Sara Ganim has earned herself — and her staff — a Pulitzer Prize. And at the age of 24, she is the youngest recipient this year and one of the award’s youngest recipients ever. Considering how this story, which she first started covering when she was fresh out of college, blew up all over the world, it’s a signal of a pretty huge career ahead for the young reporter. 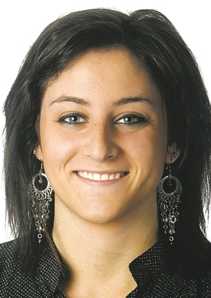 Seen above celebrating with the rest of the staff of the Patriot-News, Ganim first started covering allegations that Penn State assistant football coach Jerry Sandusky was sexually abusing young boys and high-ranking people at the school, including the late head coach Joe Paterno, were covering it all up. At the time, she was 22 years old, already breaking news about the scandal emerging at her own alma mater. She graduated from Penn State in 2008, then landed a job at the Centre Daily Times, where she reported on local crime. Little did she know that a local crime would make the news across the country and beyond.

Ganim was responsible for breaking the story of a grand jury investigation into the Sandusky allegations and has won several other awards for her reporting ever since. The former intern for the Associated Press says that working for a smaller newspaper helped her develop her reporting and investigative skills, preparing her well for her current job at the larger Patriot-News. She now begins work in the wee hours of the morning, never really letting go of the possibility that a story might just pop up:

“I have a police scanner on my nightstand,” she writes on her personal site. “I fall to sleep and wake up to the morning news. I work 60-hour weeks digging and investigating, chatting up sources, and peeling back layers until I find amazing stories.”

However, while she has clearly proven that old-fashioned, Woodward-and-Bernstein journalism is still alive and well, Ganim says she uses social media and new technology to assist her in her investigations, “because newspaper reporting isn’t just about ink and paper anymore.”

Poynter has even implied that bigger news outlets, namely cable network ESPN, might even be a little jealous of being outdone by a local paper in small-town Pennsylvania: “With the biggest staff of sports journalists in the world, ESPN should have been leading the charge to ask tough questions and shed light on this scandal. Instead, it was the tiny Patriot-News in Harrisburg, Pa., out in front of the journalism pack.”

Now, because of Ganim’s efforts, Jerry Sandusky is being held accountable for his alleged crimes and will go to trial in June. Who knows what else Ganim and the news team with whom she works will uncover next. All we know is that if she senses a story, she’s on it.