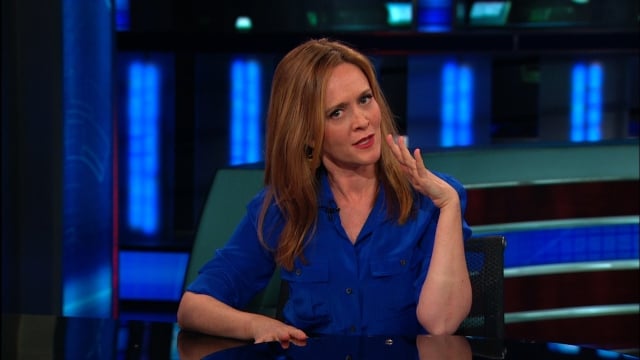 Despite many late night TV fans declaring Daily Show correspondent Samantha Bee a shoe-in to host the show after Jon Stewart leaves—and despite a vaguely worded tweet about good news that left her Twitter followers speculating wildly—Bee announced today that she will actually be joining her husband Jason Jones in creating a new comedy series for TBS instead. Hoo boy, these are some mixed emotions I’m feeling.

Right now it’s not 100% definite whether it will be a topical late night show similar to the one she and Jones have both worked on for years, but given that it’s “being planned as a platform for Bee to apply her smart and satirical point of view to current and relevant issues” according to the press release, we’re guessing that late night is precisely what the network has in mind. Bee hosting her own show of this kind would be great for diversity in television—which as we all know is not doing so well lately, especially in late night—but given that TBS is a relatively bit player in the late night landscape, I do sort of wish that she’d gotten the gig somewhere else. Although hey, maybe this will be the show that boosts TBS’s cred?

Jones and Bee also recently announced plans for a new 10-episode scripted comedy series that they will executive produce together, making this the second show the pair has developed for the channel. “We actually have their kids coming in next week to pitch us animation,” joked Brett Weitz, executive vice president of original programming for the channel. Man, I know you’re not serious, but I bet those kids are hilarious.

So that leaves one question—with both and Jessica Williams out of the running, now who’s our top pick for possible female Daily Show anchor? Kristin Schaal? Rachel Harris? Olivia Munn? Sarah Vowell from that one time? Somebody who hasn’t corresponded for the show before?