The Jazzy Stylings of Sam Neill and Jeff Goldblum Back Together Again for Jurassic World: Dominion? Don’t Mind If I Do. 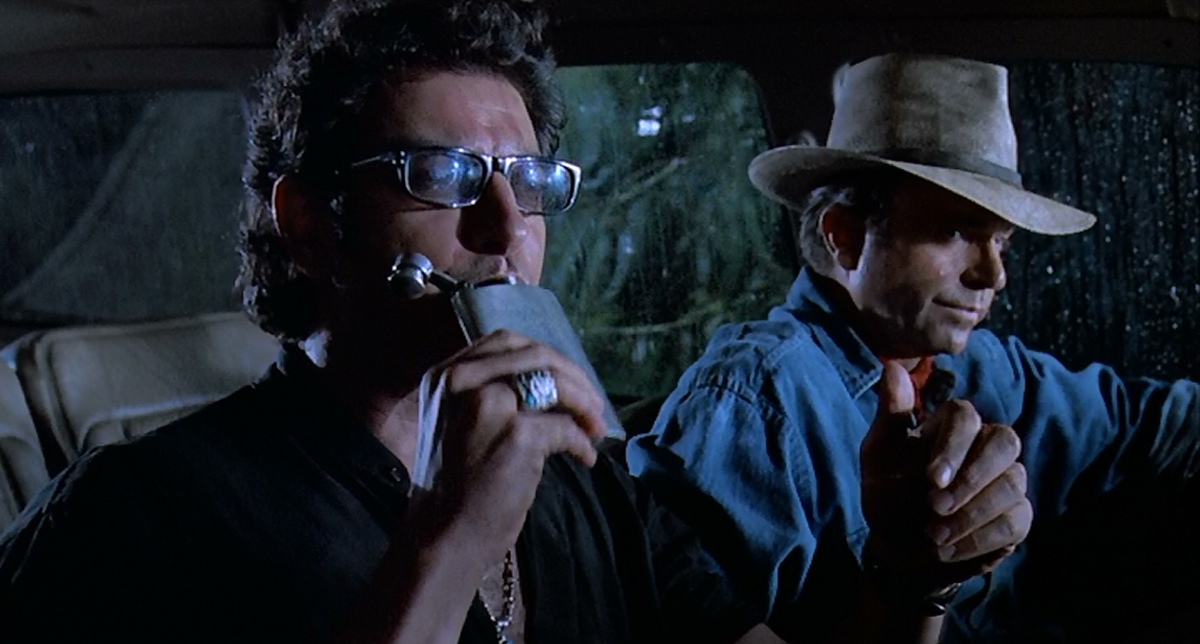 Few things bring me joy the way the Jurassic Park franchise does. Every Fourth of July, I watch as many of the Jurassic movies as possible because, at this point in my life, I want nothing more than to go to a park filled with dinos. If I’m going to die, at least it should be at the hands of a T-Rex.

But what 2020 is gifting me is the return of some of my favorite characters to the world of dinos. In Jurassic World: Fallen Kingdom, we saw a brief return by Dr. Ian Malcolm (Jeff Goldblum). He warned the world of man what bringing the dinosaurs here would mean, and in the end, he knew that they would reign supreme because it was man who brought the extinct back to life.

Now, with Dominion, we’re getting Ellie Sattler, Alan Grant, and Ian all back together. Sam Neill and Laura Dern are joining Jeff Goldblum back in the Jurassic franchise, and what has it given us thus far? Sam Neill teasing us with looks at his Dr. Alan Grant costume, and now with jazzy classic from him and Jeff Goldblum. Wow, 2020 is looking up.

Starting with a song titled “I Remember You,” Sam Neill and Jeff Goldblum perform duet about remembering each other, since they’re back together for Dominion.

I Remember You #JeffGoldblum pic.twitter.com/gFAv6LGFH3

“It’s a long, long while from May to December,” they both sing in a second video, and while I love them both, they clearly haven’t been living in the hellscape of 2020, where March–September has somehow passed by in a blur.

Another #JamWithJeff . Hers the thing- #JeffGoldblum flatly refuses to rehearse. So every time is the first time. pic.twitter.com/I0iFmHCpUo

Maybe these videos are just fun because both Sam Neill and Jeff Goldblum bring me joy? Or maybe it’s my subconscious knowledge that this reunion means that Dr. Alan Grant and Dr. Ian Malcolm await me when Jurassic World: Dominion finally comes out, but whatever it is, I’m just happy and hope that we continue to get lovely content like this while filming resumes.

I know I’m not the only human in the world who loves Jurassic Park, and I’m happy for those others out there who are delighted by John Hammond’s dinosaurs, and I can’t wait until we are back with our favorites as they deal with dinosaurs literally just … walking around everywhere.

I’m basically Jake Johnson from Jurassic World when it comes to these movies.

Is #JamWithJeff going to become a thing? I sure hope so. All I request is that Sam Neill and Jeff Goldblum get Laura Dern in on one of these sessions so I can proudly ascend into a higher plane of being, because Dr. Alan Grant, Dr. Ellie Sattler, and Dr. Ian Malcolm will have finally been reunited.