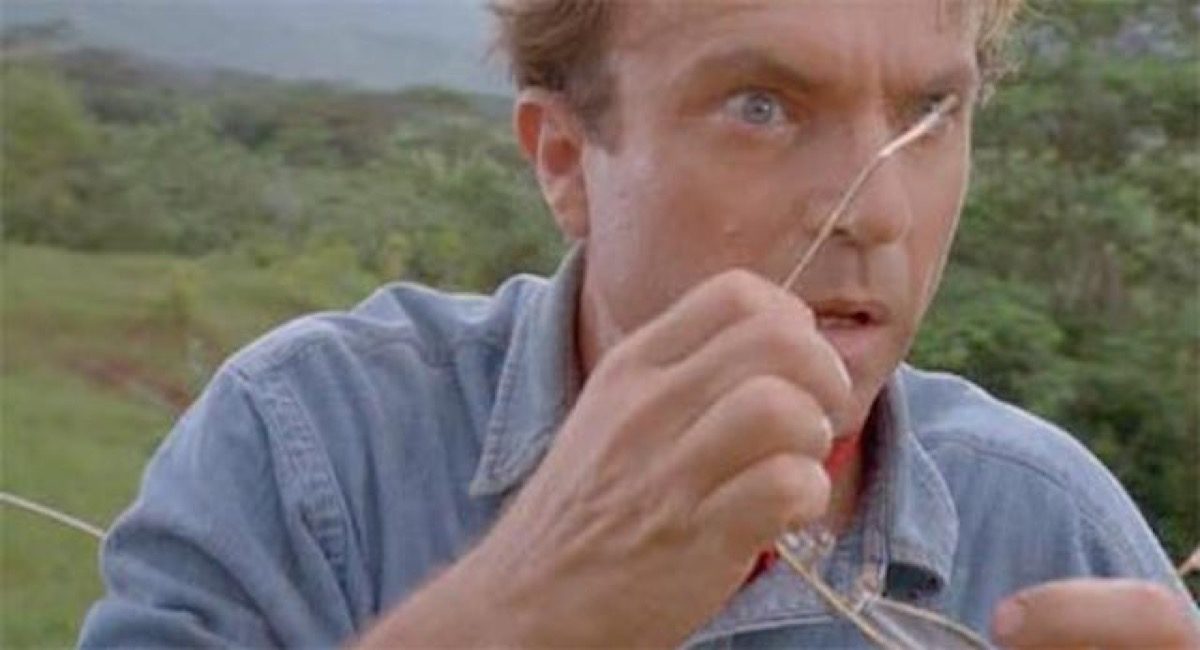 We’re well aware of the fact that Laura Dern, Jeff Goldblum, and Sam Neill are all headed back to the world of dinosaurs, whether their characters like it or not—especially when it comes to Ellie Sattler and Alan Grant, two characters who weren’t exactly keen on showing back up on the islands in the original trilogy.

But, for all three … welcome back to … JURASSIC PARK. As we’re gearing up for the original three to return to the franchise in Jurassic World: Dominion, it seems as if Sam Neill is ready to give us a brief look into Dr. Alan Grant’s appearance in the upcoming sequel.

This is the first picture that I’ve seen of any of the three back on set. Filming in London was shut down due to COVID-19 concerns and is just now returning. The crew went back to set under intense coronavirus precautions. Jeff Goldblum also opened up previously about going back to set and how he felt safe about doing so in London:

We’re headed, in about a week and a half, all of us, over to England, where there are protocols galore. We’re going to be very safe, I think. And we’re going to shoot Jurassic World… They gave us 109 pages. They invested all their heart and soul, and a lot of money, into making sure that we’re safe. I won’t bore you with the details, but we’re all going to be quarantined in a kind of a bubble, all the crew and all the cast. And testing and everything… We know it’s a risky time, but we feel it’s good. Sam Neill’s there and Laura Dern and Chris Pratt and Bryce Dallas Howard; Colin Trevorrow’s directing, and there are gonna be some dinosaurs.

As someone who loves the Jurassic Park franchise, it’s going to be interesting to see how they involve Grant. With Jurassic Park III, he made it clear in the beginning that he didn’t want anything to do with the dinosaurs that existed on the second island and that his exploration of them would continue through his fossil work.

But now, with dinosaurs roaming the world of man free from their imprisonment on either island, Grant is probably going to have to come in contact with the world that John Hammond made in a new and exciting way. Plus … the fact that Alan Grant just keeps wearing that same hat all these years later just delights me to no end! Has he changed much? I’m hoping not, but getting to see Dr. Ian Malcolm, Dr. Ellie Sattler, and Dr. Alan Grant all back in action is going to bring some hope back to my life.