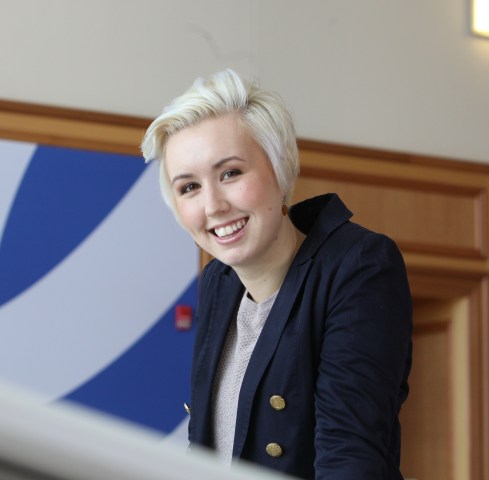 If you’re not familiar with Sally Le Page yet, you’re in for a treat. The host of “Shed Science,” a YouTube series that looks at animals’ sex lives (and other fascinating elements of the natural world!) in an accessible and informative manner, Le Page is now sharing her talents with a whole new audience in her role as General Electric’s Creator-in-Residence.

Le Page took some time this weekend in between filming and hosting a “Science of Movies” panel at Fullscreen’s SXSW Space to talk to The Mary Sue about what GE’s Creator-in-Residence program has in store, why YouTube is an ideal platform for bringing science into the mainstream, and frogs. She sure loves frogs.

The Mary Sue: Did you always want to be a biologist?

Sally Le Page: I think so, yeah! When I was younger I spent all my time in the garden. There was a pond there and I was always playing with the frogs in the pond and so I always thought biology was incredible. And I watched an awful lot of natural history documentaries when I was younger, I grew up in the days of David Attenborough. Anyone who watches that gets attracted to nature. That’s both what got me interested in nature and the broadcasting and communication side of it as well.

TMS: What inspired you to start using YouTube specifically?

Le Page: I was in the first year of my undergraduate degree in biology and I had this idea to have my own YouTube channel. I was watching YouTube long before I ever started making videos on it, and because I always had this dream of making science programs, I thought well, when I come out of my degree, no one’s going to employee someone who has only got a biology degree and no media experience. So I thought, ‘well, there’s a thing called YouTube that I spend all my time watching.’

I thought ‘well okay, I’ll make my own video, talk about something interesting,’ and it would teach me write a script, how to look into a camera and talk, and I thought it would kind of build my own little portfolio I suppose, give me some experience and make me more employable, and once I started doing it, I got the bug. You get instant feedback, you get to talk to the audience about what they like, what they don’t like, it’s a really fun thing to do.

TMS: What is talking to the audience like? YouTube gets a bad rap for having a particularly vitriolic comments section, especially when you’re a woman.

Le Page: YouTube, well, it’s not 4Chan. YouTube is now at the stage where it’s so big that you have different pockets of it that have very different personalities. I have the loveliest audience you could possibly wish for, consistently they write thoughtful, intelligent comments and they really engage with what I’m saying, and when you have the odd new person coming in who just wants to talk about my looks or say something derogatory, before I even get to that comment, the other people have popped in and said ‘you do realize this is a real person you’re talking to.’

Having said that, I’ve also been on other areas of YouTube. I’ve been on podcasts, I’ve been on larger channels where I suppose I don’t have that same connection with my audience, and it got more critical. I’m not gonna lie, it is harder to be a woman on YouTube than it is to be a man. It is one thing I am aware of whenever I make content but in general I’ve been pleasantly surprised with the reception I get.

TMS: I think recently we’ve seen the discussion surrounding diversity and science become more of a mainstream concern. What’s it like to be a woman who is working in a primarily male-dominated field?

Le Page: I am again very lucky in that Biology, of all the sciences, is the most equal. My department is very emphatic on promoting diversity within the department. Within my experience of science I’ve found it a very enjoyable place to work, although at a professorial level, the male professors far outweigh the female professors but I think there’s recognition to change that and there are for example equality and diversity professors whose job is to make sure this is a concern that’s constantly being looked at. I’m aware I’m in a male dominated environment, but from my personal experience, that really hasn’t affected me yet, although I haven’t been to the wider side of science. I think things will be different once I venture out of Oxford. Oxford is it’s own wonderful bubble.

TMS: You grew up getting interested in science through nature programs. What else do you think we can do to get young girls into science?

Le Page: I think it is really important, especially as we’re moving away from TV–because I think there is so much fantastic programming on TV, especially in the UK–I think it’s important that the new media people use like YouTube is almost saturated with science content so that there is diversity. To be honest with you, I think it’s such a difficult question, getting girls into science. If I knew the answer, I would have fixed it all by now [laughs]. I’m so pro women in science, a lot of my friends get sick of me talking about it all the time.

I think it’s really important that we don’t see young women and girls as this one group, we realize that everyone is different. So it’s important, for young boys as well, that we see a diversity of role models, we have a diversity of channels, so that there is something for everyone. It’s my personal aim to bring science into culture in the same way that sports and TV and art and music are. Because if you ask someone ‘who is Mozart, who is Brad Pitt, who is David Beckham,’ and they said, ‘I don’t know, not my area,’ people would think they were crazy! But if I was to say, ‘who is Marie Curie, who is Albert Einstein,’ and they say ‘I don’t know, I never really liked science,’ we kind of except that as okay. I want to bring it more into mainstream culture.

TMS: what can you tell us about your partnership with GE? What do you have in store for us?

Le Page: Primarily YouTube videos that we’re making in collaboration, and one of the things we’re talking about is bringing science into more mainstream culture, specifically the science behind some of the films that are upcoming in 2015. So we’re starting with the premiere of a video about Chappie, and we’re taking that and saying okay, using this as a starting point, where are we in robotics? So looking at the science of these films and saying “ok, how much of it is fiction, how much of it is reality, is it ever going to become real,” and speaking to scientists at GE and using GE’s facilities to really bring the science alive in the same way the film has. I get access to all of these top-level scientists so that I can make these amazing videos I just wouldn’t be able to make otherwise.

TMS: Is there an upcoming film this year that you’re particularly excited to study?

Le Page: There’s one film I’m excited to talk about but it’s not been confirmed yet! I really, really wish that I could tell you what it is! I am super psyched about it. It’s going to be amazing. I would love nothing more than to talk about it!

TMS: Will you be bringing any of the musical talent we’ve seen on your own channel to your work with GE?

Le Page: I’d like to, I think it spices things up a bit! I don’t think people expect scientists to sing! In a few hours before I left for New York I decided to make a video about the blue dress [yellow dress]. People don’t expect that, and it’s a fun thing to do! I do those videos because I think they’re fun.

Le Page: I would be, if I wasn’t wandering off! [laughs].

TMS: You were saying earlier that you could see yourself carrying on doing science and media, and that always makes me think of people like Bill Nye and Neil deGrasse Tyson, who have done so much to make science accessible.

Le Page: It’s interesting, Neil deGrasse Tyson and Bill Nye are very American. When I’m back in the UK everyone is like “oh, so you want to be the next David Attenborough,” he’s our version of Bill Nye as someone everyone grew up with. But yeah, I really want to continue being more involved in media, and continue being a scientist as well, because I love science, I get to answer amazing questions and be curious and say ‘oh, I’ve got this really interesting concept about this aspect of evolution, let’s just give it a go and try it out and see what happens!’ I want to mix media and science and continue doing that, but it’s early days. And there are also so many changes in the media! I mean, YouTube wasn’t a thing really five years ago. Who knows what’s going to happen by the time I finish my PhD!

TMS: What’s your favorite animal and why? I know that’s broad.

Le Page: Oh! My gut instinct is to say the frog, because that’s how it all started. They’re not the prettiest of creatures, but they’re one of the few animals in the garden that you can pick up and get a closer look at without it biting you or flying off. And I’ve been to some rainforests studying ecological biology, and I think frogs are the things that are the most fascinating, because you can just get a proper look at them and they can fly and anything! You’ve got flying frogs! And frogs can breathe under water! And there are frogs that can be frozen, literally their blood can freeze and they’re fine. So frogs are amazing. Frogs in general. I’m not going to pick one in particular.