No. Wait. Is this a trick question? 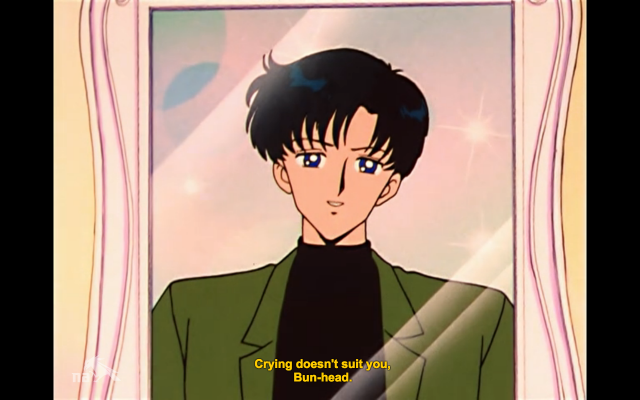 Usagi, do you often keep framed photographs of men who insult you around? …is this your burn book?

Usagi, do you often keep framed photographs of men who insult you around?

…is this your burn book?

Just when I was sitting around getting my nails did and wondering what a superhero fight in a nail salon, full of various sharp objects and sterilizing kilns, would be like Sailor Moon, of all things, delivers.

It’s the beginning of a new story arc! And Usagi, understandably, is down in the dumps. Tuxedo Mask may or may not be alive, he’s definitely actually a guy who is super mean to her, and she just found out that she’s a princess from another celestial body. Luna puts it best: “She said she would fight alongside everyone, but that’s not what she wants.”

Luna and the other senshi are sympathetic, even Rei, who’s also dealing with the fact that the guy she was dating isn’t who he said he was and may or may not be dead. Except Artemis, who gets up on his high cat tree about how this is the worst possible time for her to be emotional, they need her to accept her role as princess and learn how to use the Legendary Crystal. I mean, he’s right, but he’s being a dick about it.

Usagi’s so down, she can’t even get excited about the opening of a brand new store that’s offering free haircuts from a famous stylist that are absolutely not part of a dangerous plot or scheme to kill the Sailor Senshi. Man, it’s been so long since the Dark Kingdom tried to work evil through capitalism! Like, Jadeite long! No wonder all of her classmates are excited.

Oh! But this isn’t just the start of a new story arc. It’s also the first monster of the week episode after the introduction of a new Sailor Senshi, and you know what that means: an episode that pairs Minako and Usagi for some one on one time. 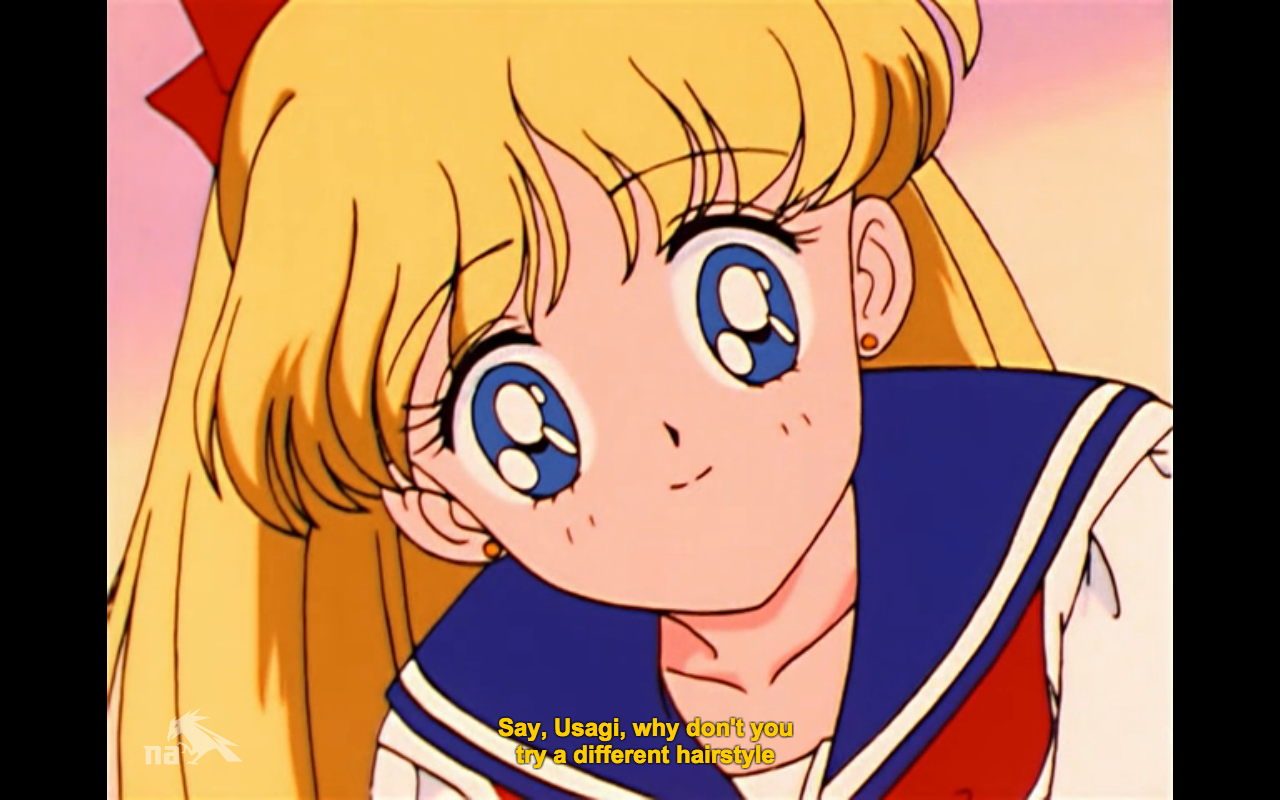 Minako, nobody recognizes me when I change my dress, you think people will recognize me if I change my INCREDIBLY DISTINCTIVE HAIRSTYLE?

So Usagi and Minako trot off to Kariko Tokoyama’s brand new salon to take advantage of its free haircuts and SURPRISE, it’s a Dark Kingdom plot. They’ve taken over Kariko Tokoyama and all her employees, but what are they hoping to do with all these ladies who want free new do’s? For once the answer is not “suck out all their energy.” It’s actually sort of creepier? Turns out Kunzite managed to snatch up one of Sailor Moon’s hairs during his last fight with the Senshi, and this free haircut scheme is a way to compare it to all the hair of all the women in Tokyo and thereby find out the secret identity of Sailor Moon, in order to kill her and take the Legendary Silver Crystal.

At the salon, Usagi gets set up with a shampoo, and even though Minako isn’t there for herself, an employee entices her into one of the “hair steamers” that are inspecting everybody’s hair. And wouldn’t you know: while brushing Usagi’s hair earlier in the episode, she’s picked up one of Usagi’s. Because more shed hair. 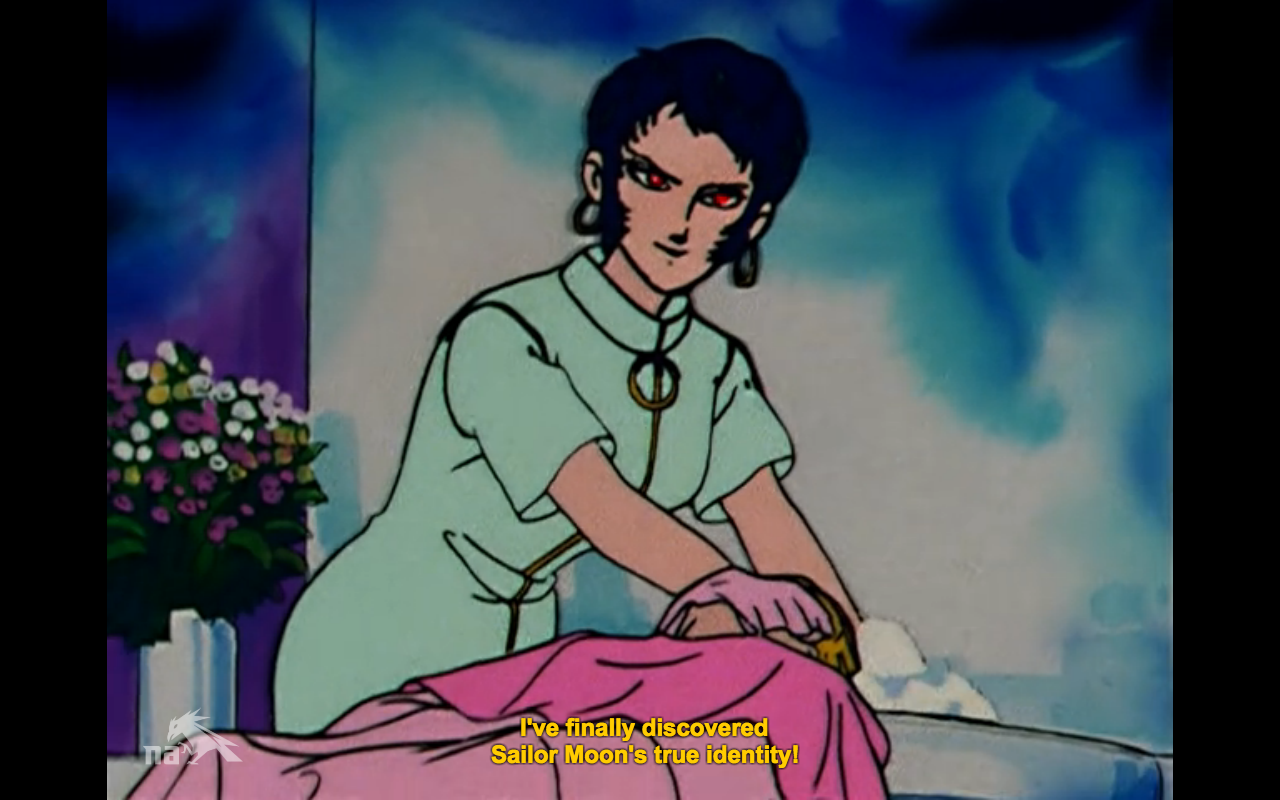 Note: It is impossible to look menacing when you’re shampooing someone else’s hair.

Possessed, Kariko springs upon Minako, demanding admissions that she’s Sailor Moon and the surrender of the Legendary Silver Crystal, as her employees gas the all the innocent bystanders to sleep. Once that’s done, Kariko and all of her employees actually merge into a single crazy barber-shop themed youma. Unnoticed in the fray, Usagi manages to keep from being put to sleep and transform into Sailor Moon to confront the youma Mitsuami as Minako faints. 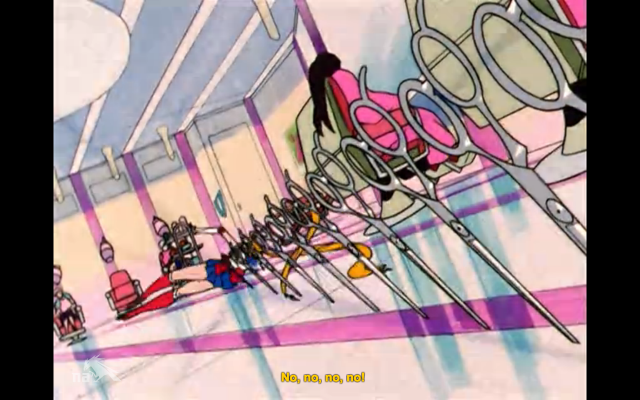 See, an automatic weapon that fires scissors! Salons are rife with opportunity for superhero fights.

Eventually things reach their inevitable conclusion: Moon Healing Escalation, with a wand newly enhanced with the Legendary Silver Crystal. But Usagi is stopped by… 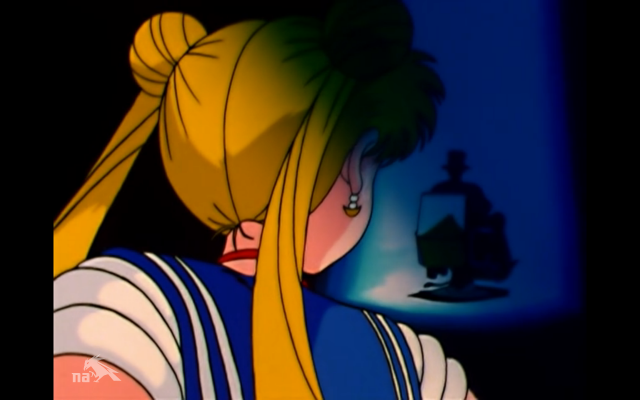 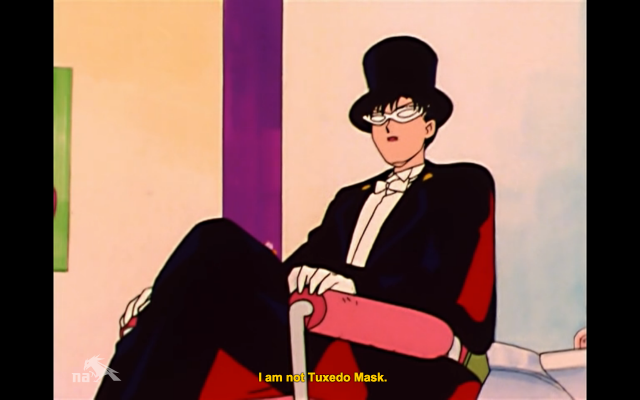 Uh, look buddy, obviously lying about your identity might work on some other folks on this show, but not me.

That’s right, Tuxedo Mask has gone over to the Dark Kingdom. Also he wants to be called Endymion now. Stunned and confused by this turn of events, and facing an angrier Mitsuami, Usagi takes the fight outside just as Minako wakes up, transforms, and calls in the cavalry. A quick fight later and: 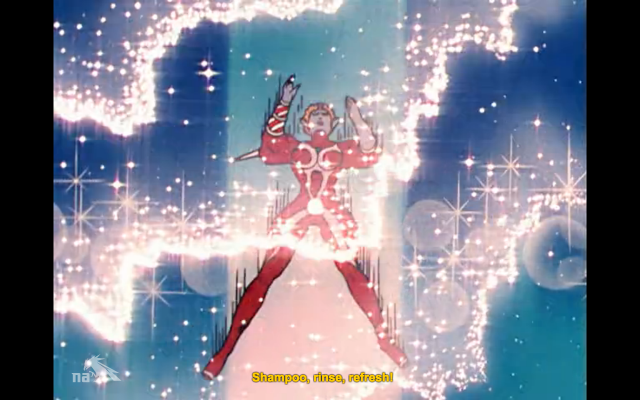 All the women who made up Mitsuami reappear and faint in a heap. Confronted by all the Sailor Senshi, Tuxedo Mask confirms that he is evil now, definitely. “You should know that even red roses turn black when they wilt,” he tells them, and can I just say that a male character who is defined by a floral theme is lovely? And then everybody would have thrown down if not for Tuxedo Mask suddenly being ordered back to the Dark Kingdom by Queen Metalia herself, because she doesn’t want him to die. So obviously she has strong opinions on who would win in a fight between Tuxedo Mask and the Sailor Senshi.

In the Dark Kingdom, Queen Beryl and Kunzite congratulate themselves smugly on successfully brainwashing Sailor Moon’s greatest supporter into a warrior for their cause. In Tokyo the episode closes with a usual beat of Usagi saying a couple things that are pretty responsible and then immediately undercutting them by expressing non-critical fascination and worship of Tuxedo Mask.

Not a huge amount to say about this episode, although it’s certainly following some tough acts to follow. As an episode that should theoretically explore Minako’s background, I feel like we got more of Artemis’ personality here. Usagi’s instinctual assumption that Tuxedo Mask is being brainwashed or mind-controlled is completely in character but also removes drama from what could have been a plotline where the audience knows that he’s been brainwashed but the Senshi think he’s sincere. Ah well, there’s always next week!