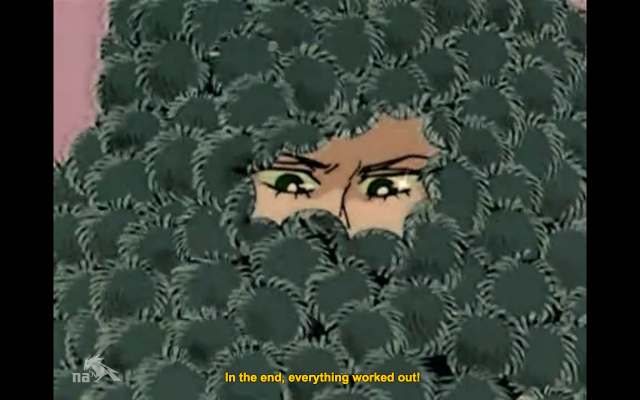 Welcome to Sailor Moon, your towering column of rats is ready.

At the start of the episode, Luna is being chased through the streets by a literal hoard of stray cats. Apparently she got involved in some kind of stray cat turf war, but we are never given any details on it, so I’m just going to imagine that when she’s not guiding the Sailor Senshi, Luna is clawing (ha!) her way up the chain of command in some kind of feline mafia. Run by mafialines. We’ll call it the Catsa Nostra.

When all seems lost, the cat army is turned back when  the improbably named Rhett Butler, an enormous (as in, get this cat some Science Diet), pale green, slit-eyed cat, throws a fish skeleton into the ground in front of them. Apparently Rhett Butler has got real clout with the cat mafia, because they back off immediately, even the teeny kitten gnawing on Luna’s tail. But before anything can be made clear about this mysterious cat of mystery, he’s swept and up and cuddled away by his owner, a little girl. 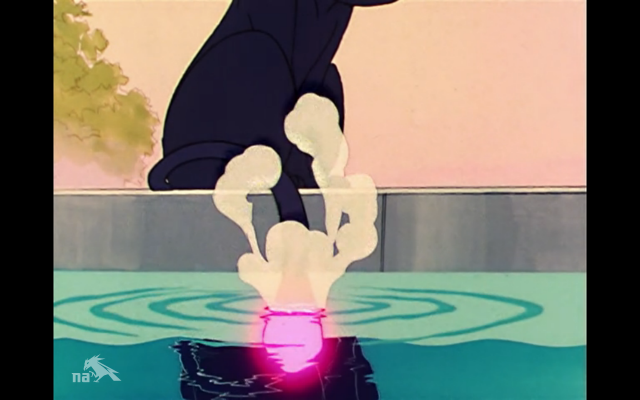 A cartoonish representation of pain, or is Luna POWERED BY A NUCLEAR REACTOR.

Having escaped, Luna is free to meet up with the Senshi to discuss the search for the next Rainbow Crystal, which has got to be the violet one since we’ve seen all the other ones. And for once, Usagi isn’t the missing member: Rei’s totally blown off the meeting in order to go on a date with Mamoru… despite the fact that she hasn’t actually made plans with him yet. Cut to Mamoru doing some broad daylight brooding in his apartment about the Silver Crystal and his boring problems while he straight up ignores Rei’s voicemail (now there‘s a throwback) as she records it in the background. This leaves a frustrated Rei wandering Tokyo until she bumps in to Yuichiro (MY SHIP). He asks her out to tea, but her instinct to play aloof and hard to get backfires as he takes her “I’m not sure” at face value and says he’ll see her later then.

Anyway, back to people who are actually getting stuff done: trying a new tactic, Ami uses her magical supercomputer to detect the location of the final Rainbow Crystal, and it turns out to be the house where Rhett Butler lives. And I’m having a really hard time thinking of him as Rhett Butler and not “that weird cat.” Not wanting to have another awkward encounter with that weird cat, Luna says the Senshi should go on without her, and Usagi does not waste the opportunity to needle her mentor for shirking her responsibilities. This leaves Luna alone on the street as the three girls approach the house. 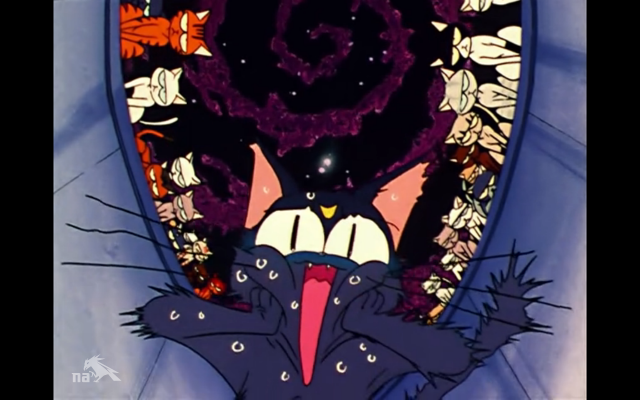 What could possibly go wrong?

The girls ring the bell, but as Rhett Butler’s owner approaches with him, he squirms out of her arms and dashes into the street. Yelling for him to come back, the little girl runs after him, with the Senshi following somewhat more slowly, perhaps out of the knowledge that chasing a little girl that you don’t know down the street when here parents aren’t home isn’t the best way to deal with a situation. On his dash to save Luna, Rhett Butler loses his owner in a dark alleyway and who should accost her there but, you guessed it: Zoisite. Like the Senshi, he has sensed that the next Rainbow Crystal is in the vicinity, and since all the Great Youma were incarnated in humans, it must be the little girl. 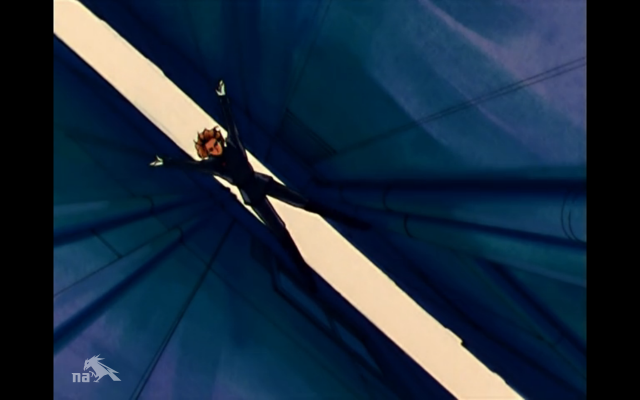 Also he literally just drops in spread eagled like the most accurate skydiver ever and it’s hilarious.

This episode has some considerable Zoisite hilarity going for it, my favorite kind of hilarity. Our King of Heaven tries his best to squeeze a stone from blood, but it appears that there’s no Rainbow Crystal inside this little girl. Could it be that her cat is the reincarnated Great Youma? The Sailor Senshi attempt to stop Zoisite, but are hampered by the close quarters of the alleyway. He watches them flail for a bit and then decides that he just don’t have enough time for them to sort themselves out and leaves for the sewers. Why?

Because in the meantime Rhett Butler has saved Luna from the rampaging stray cats, only to trap both of them alone in the sewer. Zoisite is just going where the crystal can be found. The first thing he does down there is put his whole boot into a river of muck, and then stare up at the ceiling with his fist clenched, blushing furiously, and saying “This might be my greatest challenge yet.” Then he wanders into a tunnel, puts his hand out to the wall, remarks on how squishy and warm the surface is, and then realizes everything in the tunnel is covered in rats. 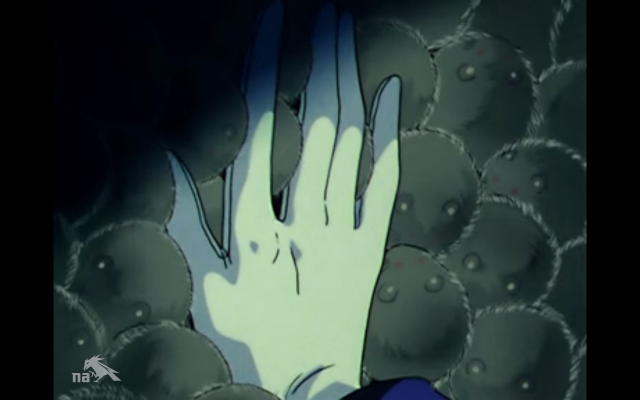 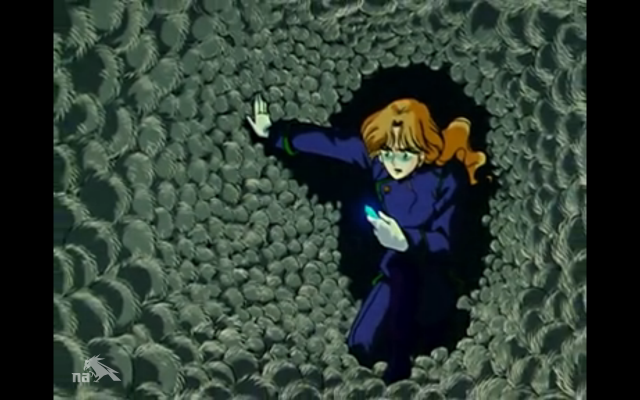 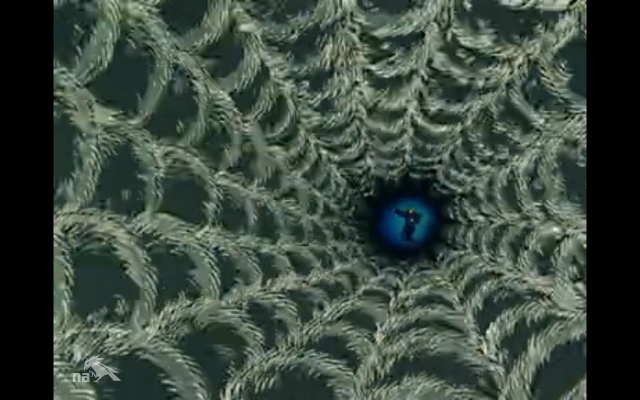 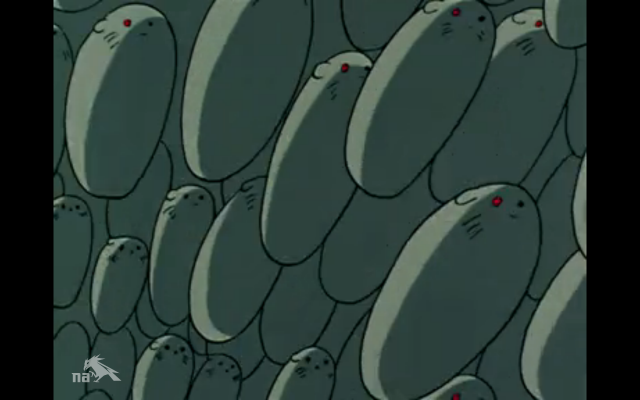 This doesn’t leave Luna and Rhett Butler much time to have a tender moment where Luna figures out what we’ve known from the get go, given Sailor Moon‘s well-established themes: the reason why Rhett Butler saves her all the time is because he like likes her. Because now Zoisite is hot on their tail, and hot on his tail is a MASSIVE HORDE OF RATS. Luna manages to cram Rhett Butler into a small access tunnel, hoping that Zoisite won’t be able to follow. 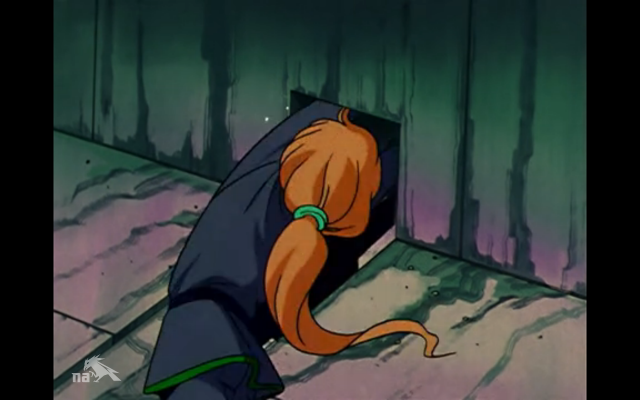 The rats can easily follow as well, and, slowed to a crawl to fit inside, Zoisite is quickly entirely swallowed by the swarm. Is this the end of our brave villain? Well, no, but I was not expecting what actually happened. Luna and Rhett Butler manage to beat the rats to the tunnel end: an runoff channel near where Rei is feeling sorry for herself for not just accepting Yuichiro’s invitation to a date.  The swarm blasts out of the tunnel behind them in a veritable explosion, catches up to Rhett Butler and Luna, and then rears up into a towering column of rats. “Disaster has turned into fortune!” proclaims the rat tower in Zoisite’s voice, “In the end, everything worked out!” This is a generous accounting of the situation.

Rei steps into the fray in an attempt to protect Luna, but she’s unable to stop Zoisite from releasing the violet Rainbow Crystal and waking the youma Bakene, a bipedal cat monster. That’s right: this cat has a human-sona. A skin-sona. Okay, a persona, I guess he just has a persona. Then the fight is interrupted by a fish skeleton smacking the Rainbow Crystal out of Zoisite’s hands and then sticking into the ground. *checks notes*

Nevermind, it’s a rose. Tuxedo Mask trots down, picks up the Rainbow Crystal, and trots off with it. Zoisite follows, yelling “Curse you, Tuxedo Mask! Come back! Come back, I say!” and neither of them are seen again in this episode. Rei, Luna, and Bakene stare after them in disbelief. Not a joke.

Anyway, then there’s some kinda moment between Luna and Bakene, showing that they really do like each other, and then the rest of the Senshi show up (they bustled the little girl back into her house and have finally figured out that if the Moon Wand isn’t reacting to her while they’re in her bedroom, she probably doesn’t have the crystal) and Moon Healing Escalation him back to normal. Except where all the other youma yell “refresh” when they’re healed, Rhett Butler yells “meowfresh.” 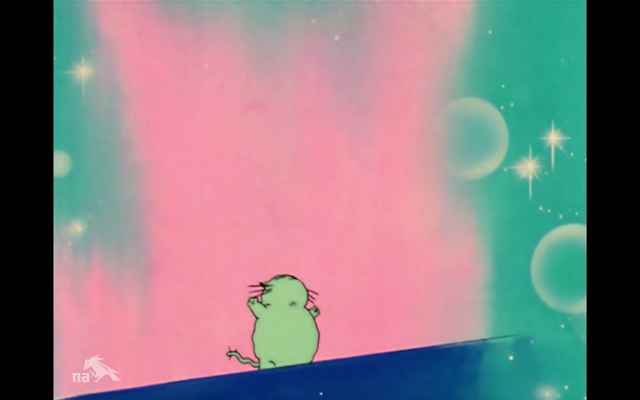 Rhett Butler is returned to his smothering owner, and it appears that Luna has faced her affection for the oddly drawn cat, even if she’s still embarrassed by it.

When I saw the title of this episode, I sat back and readied myself for some enjoyable filler. After all, it looks like the episode’s primarily about a talking cat, and with only one Rainbow Crystal left, it’s a perfect time for some deviation from the usual story. My favorite anime is Revolutionary Girl Utena, so let me tell you that I can embrace a crazy filler episode with the best of them.

Instead I was given a completely plot-relevant episode that involves a towering column of wild rats, an ugly cat version of Tuxedo Mask, and takes place primarily in a sewer.

So that’s it? All the rainbow crystals are taken? Let me look over my notes. If I’m remembering everything correctly, Zoisite has the red, green, blue, and indigo gems, Tuxedo mask has orange and violet, and that leaves the Sailor Senshi with merely the yellow gem. What’s next!? Everybody fighting over the gems they already have? I haven’t even met Sailor Venus yet!