Everybody got their frisbees ready? 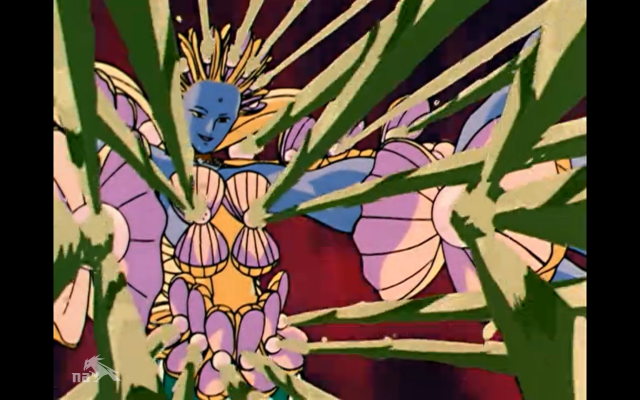 This week’s youma has clamshells on her boobs that open and shoot wax. And that’s all I’m going to mention of the matter because I don’t really want to think about it much.

Now that Usagi’s definitely the moon princess, it’s time for her to start acting like one. Or maybe just to start learning to use the Legendary Silver Crystal? You know, for all that everybody’s moaning on about how important it is that she harness its power, nobody’s, like, lining up some cans on a fence and taking her out for target practice.

Fortunately, Usagi finds out about the Princess Seminar at Rose Mansion (another Ohtori Academy front, no doubt), and Naru is right there to provide all the exposition. 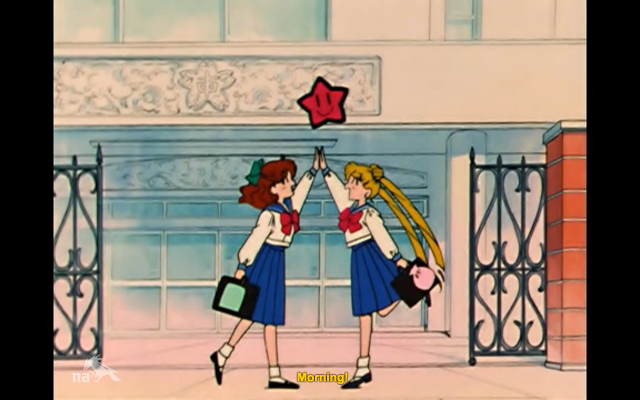 The Seminar is taught by Countess Rose, a “famous aristocrat” from England, and rich people send their daughters there to learn princess stuff like how to sit quietly, eat quietly, and dance. I mean that’s what we get to see them doing, but lets call a spade a spade: it’s a finishing school. Usagi has a fantastic daydream about being a princess… which she is… so I guess it’s about commanding the respect of a princess, which she uses to get out of homework and, what else, dance with Tuxedo Mask. She resolves to embrace her princess responsibilities so she can dance with Tuxedo Mask. Who says Usagi has trouble focusing?

But what is everybody else doing this episode? Well, Kunzite and Endymion. I’m just going to call Evil!Tuxedo Mask/Mamoru Endymion. Kunzite and Endymion are refusing to work together as a team, which is totes fine with Queen Beryl, and let’s face it, if the Dark Kingdom worked well as a team, the Sailor Senshi would have died like twenty episodes ago. In the real world, we finally find out who the man behind the curtain is in the videogame arcade that Luna’s been visiting for her marching orders. 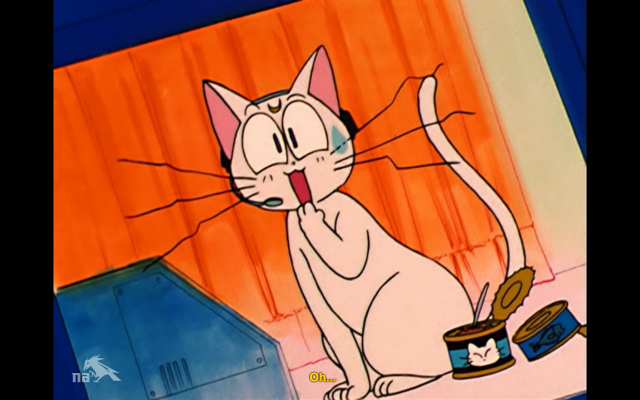 Man, Artemis, your role as resident awkward killjoy combined with being the only dude in a supportive all-female group is not endearing you to me.

Back to Usagi, who has decided to sneak into the grounds of Rose Mansion and spy on the seminar from a tree. 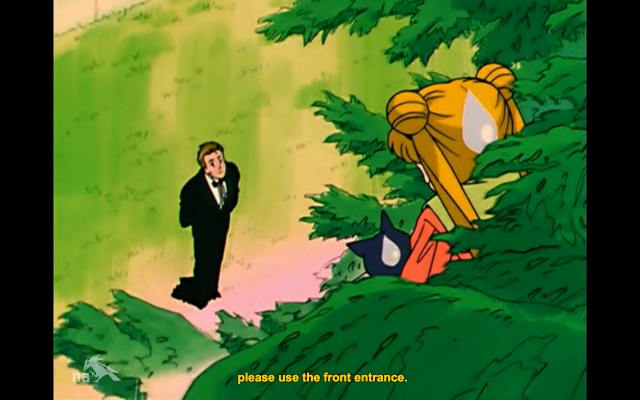 This is the tree entrance. It is only for trees.

Despite Usagi generally acting like a crazy person and talking to cats, Countess Rose says that it would be nice to have a “unique” “unskilled” person around the other girls, and welcomes her into the seminar. There’s something fishy about this operation and it starts with all of the girls having to be proficient in the not-so-princess-y art of throwing a frisbee. But, as Kunzite explains to his youma helper (at this point, do I even need to mention that the “new thing of the week” is a Dark Kingdom plot?), Sailor Moon is really good at throwing her tiara, but is also really clumsy. So their seminar is bound to turn up a girl who fails at the princess arts and is great at throwing a frisbee around. And that’s how they’ll capture Sailor Moon.

“But, like, what if Sailor Moon sees through our trap?” asks youma Shakokai. “Oh, she won’t,” answers Kunzite. 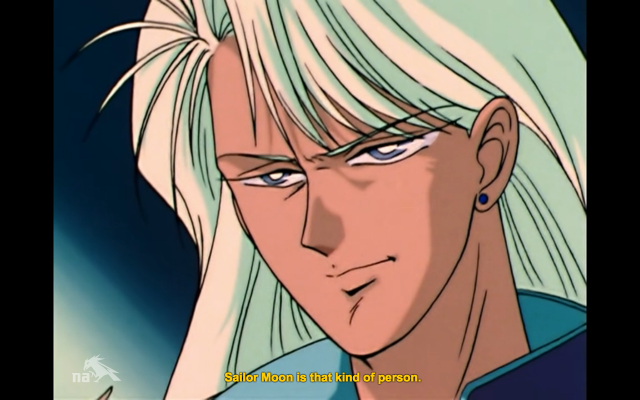 But at least the other Senshi are better at recognizing a Dark Kingdom scheme, right? …Eh. The princess’ guardians stand around the shrine without Usagi, as she’s shirking Senshi time for the princess seminar. Ami points out that this is actually a sign of positive growth for Usagi, taking her role as the princess seriously. Which leads Minako to start questioning the validity of Artemis’ rigid definition of feminine perfection, in a moment I was honestly not really expecting. With all these big events it feels like ages since the last time the show said something definitive about the expectations placed on young women, but I guess it hasn’t been that long.

“What’s wrong with the way Usagi is now,” Minako asks, and Artemis’ answer is that she has to start behaving like a princess. Upon further question he can only insist further that only a “proper princess” can wield the Silver Crystal. The Sailor Senshi don’t have time for your bullshit limited notions of femininity, Artemis!

Then all the Senshi decide to go join Usagi in Kunzite’s trap, saving her from a montage of being terrible at princess things (including politely offering someone coffee, important later) that’s capped off in a formal dance. Feeling pretty low about her potential as a princess, Usagi is overjoyed for her friends to show up and remind her through their own actions that you don’t have to be perfect to be loved, valued, and respected. Surprisingly enough, it’s the social outcasts Ami and Makoto who are most graceful on the dance floor, while Usagi, Rei, and Minako step all over their partners’ feet.

Meanwhile, the sinister Countess Rose circulates among the students, tapping the girls who passed this last test of grace (including Ami and Makoto) on the shoulder and inviting them into the next room for their graduation certificates. The graduation room is full of wax statues of girls, so that’s not great, and then it’s Youma O’Clock when Countess Rose reveals her bizarre clam covered form and turns the new batch of graduates into statues themselves.

Wait, so the evil plan is to trap and surprise-freeze the girls who are definitely not Sailor Moon, and then confront Sailor Moon to her face? Kunzite, I have some questions about your logic here, and this group of people behind me are all the parents of the girls who’ve passed your course and then never came home. They have questions, too. You really got this back to front.

Anyway, Shakokai heads back out to the ballroom, where the only failing students, Usagi, Rei, and Minako are waiting, and tells them all about the trap the Dark Kingdom set up and how she knows that one of them is Sailor Moon because they didn’t pass. And what’s hilarious is Minako and Rei’s totally blasé reaction to this. 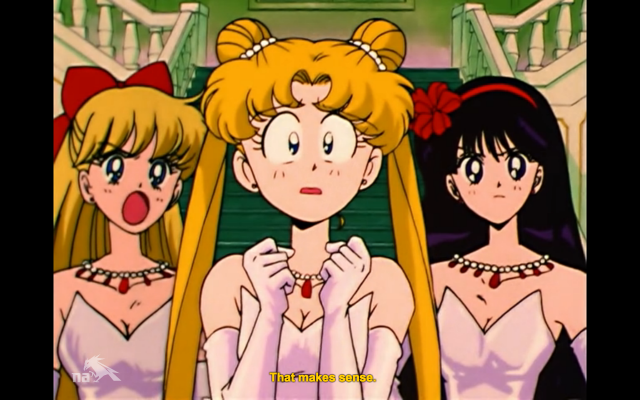 Then Shakokai gets a face full of cat (+10 points for any episode where Luna and/or Artemis mess up a youma’s face), and the Senshi dash out of the room to transform. But as is so often the case these days, the usual powers don’t work on Shakokai’s laser targeted boob clams (I KNOW I SAID I WOULDN’T MENTION IT AGAIN). I know the Senshi get bigger, badder versions of their powers at some point, seems like now would be a good time. Cue Endymion, because even when he’s evil, Tuxedo Mask knows the rhythms of a Sailor Moon episode.

He tells Sailor Moon that if she gives him the Legendary Silver Crystal, he’ll let her live (against the orders of Queen Beryl, who wants the crystal AND Sailor Moon’s corpse). There’s a brief moment of indecision among the group until Kunzite shows up to countermand Endymion, and then all the confusion is on their poor youma helper as they shout conflicting orders at her. 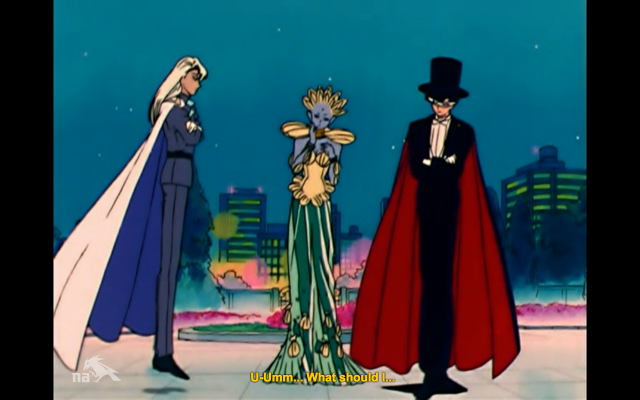 Seriously look at these dorks.

Usagi distracts Shakokai by offering her a calming cup of coffee, and when the youma’s guard is down, Moon Healing Escalations her back into Countess Rose. 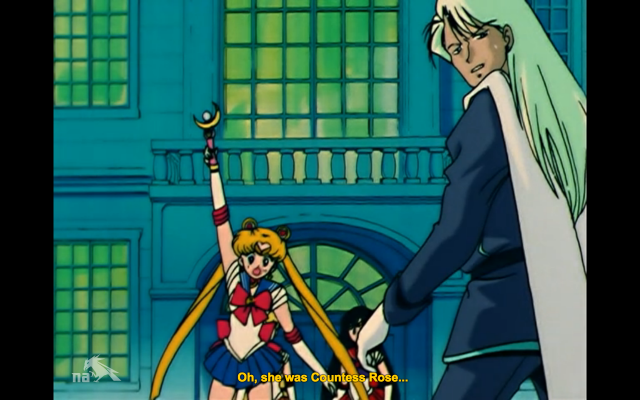 Usagi is shocked to find out that Countess Rose is a real person and not a total youma fabrication and SO AM I.

Endymion manages to get out of being Moon Healing Escalation-ed himself by… moving slightly. And then leaving. With the defeat of Shakokai, all the frozen girls turn back into their living selves, including Ami and Makoto, naturally. And we leave the episode with a final confirmation of its message: 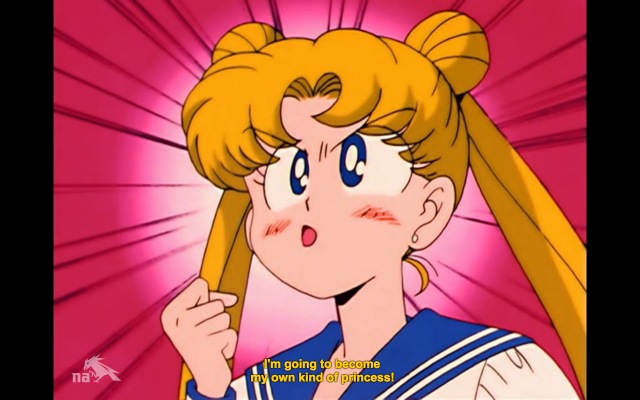 Usagi doesn’t have to change who she is to be a laudable example of femininity.

Between the reveal of Artemis being kind of an awkward secret keeper and his pretty consistent hardlining of Usagi’s development as a hero, I’m not sure whether the show is trying to make me dislike him, or if I’m predisposed to dislike him as the first male addition to an all female group. Maybe if the didn’t want me to see his presence as a the single naysaying one in a group of women, they should have had pretty much all the other Senshi on Usagi’s side for the past few episodes. It seems like Luna, Ami, Rei, Makoto, and Minako are all okay with the idea that a girl who found out that its her responsibility to save two worlds from destruction just as her true love was ripped from her and turned evil would need a bit of time to get used to the idea. CHILL OUT and be a better feminist ally, Artemis, is I guess what I’m saying.