In which Zoisite gets his hand smacked. 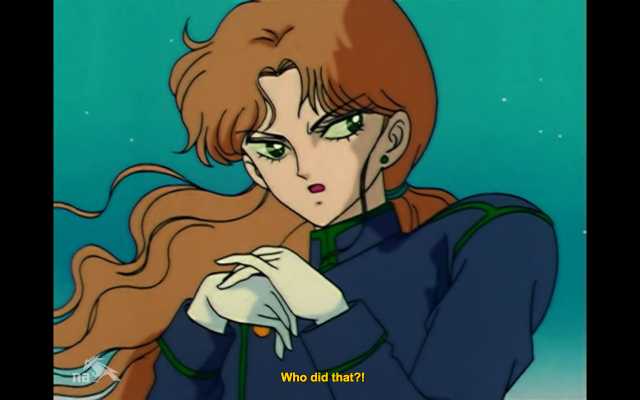 The left side of Zoisite’s hair says ponytail, but the right side says I don’t want to get married, I want to stay single and let my hair flow in the wind as I ride through the glen firing arrows into the sunset.

We can’t have a new Sailor Senshi without an episode that’s just about her and Usagi, so obviously let’s have one where Usagi and Makoto crush on the same boy. Honestly, though, I really like character development this episode gives to Motoki, which is to say that it shows he’s kind but also kind of an asshole. In other words, he’s a big brother. Hey, I’m just saying, sometimes us older siblings have trouble imagining our younger fellows as human beings, especially when they’re in the transition from childhood to adulthood.

Makoto runs into Motoki (literally, so it’s not just Usagi who does this ever in the series) during a surprise rainstorm, and they chat as he shares his umbrella with her. (Hint: remember that according to Makoto’s possibly flawed recollection, Motoki’s voice sounds just like the mysterious guy who “broke her heart.”) Motoki says he’s heard that she’s a good cook and jokingly suggests that she make him something, and that’s all that Makoto needs to hear before she’s promising to come by and cook him a meal and clean his whole apartment. And instead of saying “aw jeeze, you don’t have to do that Makoto, but it’s super nice of you to offer” or “that would be incredible, is there anything I could do for you in return, would you like some free games at the arcade?,” he says “oh shit that would be fucking sweet please come over and cook and clean for me without any expectation of returned gestures on my part.” And Makoto says: 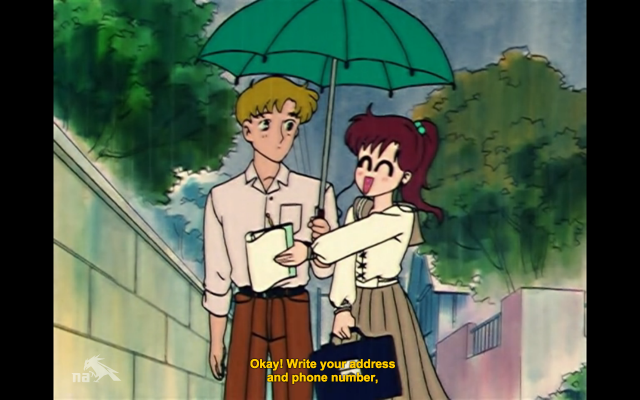 Congratulations, Motoki, you’re officially a jerk. Now go meet up with your anthrop- arche- ologist girlfriend who may or may not be leaving you for the study abroad opportunity of a lifetime to work with a respected professor on uncovering the origins of the human species in Africa. To be fair, while it’s clear that Motoki really wants an answer from Reika (who wouldn’t, in his shoes?), he’s just incredibly respectful of how hard it is for her to choose and is willing to wait as long as it takes. He talks openly to Mamoru about how he finds Reika’s research fascinating and impressive and that while he wants her to stay, he doesn’t want to get in the way of her future. 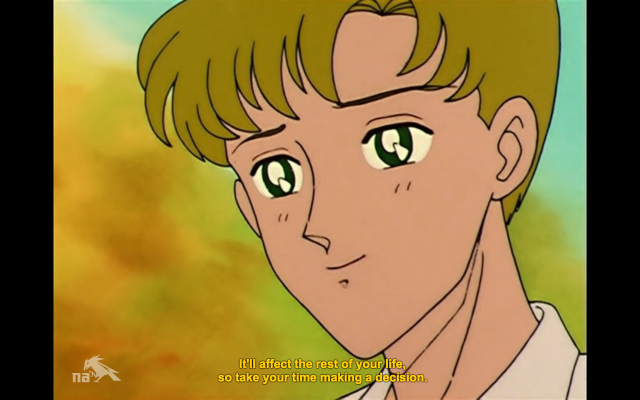 But as he and Mamoru chat, it becomes clear that while Motoki is great at imagining adult women complexly, he’s got very little respect for the emotions of the teenage girls around him. Mamoru is mortified that Motoki has agreed to let a middle-school age girl who comes to his arcade come by his apartment to cook and clean. 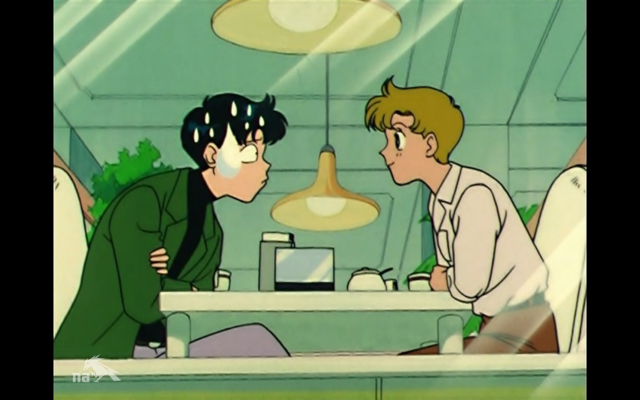 “You… know how Usagi and Makoto feel about you, right, dude?” he asks, and Motoki’s answer is not great. 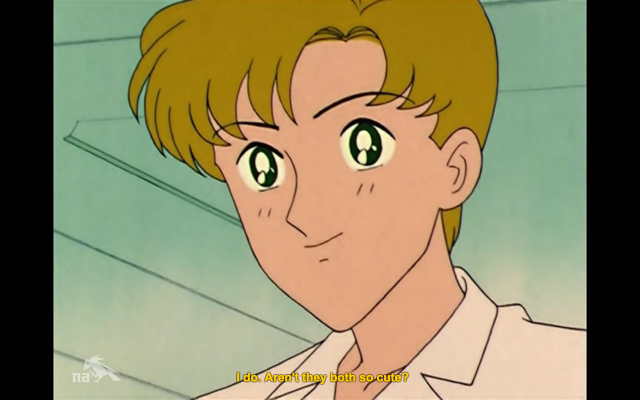 He’d never date a girl their age (cue more Mamoru mortification, but for different reasons), they’re like the little sisters he never had. Yeah… their emotional attachment to you is so adorable and you’re absolutely not taking advantage of it to get stuff out of them without any intention to give them what they want: a romantic relationship. Women who aren’t of the right age to date you should obviously be treated with the familiarity of family members regardless of the mixed signals that might send, especially if they’re family members who can provide the women’s work you so sorely lack as a young single man living alone. /barf

Anyway, Makoto cleans his pigsty of an apartment in a half hour before school starts, even though she’s naturally heartbroken when she finds out from the photos on his mantel that he has a girlfriend his own age. She takes this information to Usagi, who becomes heartbroken when she finds out that she and a dear friend will have to compete over the same crush and that Motoki had a girlfriend all along. But the two quickly resolve that there’s nothing Sailor Senshi can’t do, and that they should pursue Motoki anyway and may the best girl win, with no hard feelings. I like the sisterhood vibe, but that doesn’t seem too nice to Reika, ladies. Respect the monogamous commitments of the folks you care about!

Also Motoki’s not going to date you anyway, so no, please, forget about him. But you can’t, because he doesn’t care whether he leads you on. Because he thinks it’s cute. Mamoru tells both of them as much, but of course they don’t listen, and then he makes the mistake of mentioning Reika’s possible imminent move in front of Makoto, and that if she chooses to study abroad, they might have a chance. Mamoru, you were on such a good track. Makoto dashes away that evening to the university, to find Reika and convince her to leave Tokyo.

“What will I say that can convince her,” she wonders, “I didn’t even bring a baseball bat.” For some reason Reika confesses her intimate thoughts about this momentous personal decision to this random teenager who says she’s a friend of Motoki: she’s completely torn, but if Motoki asked her not to go, she wouldn’t. “Jesus Christ,” answers Makoto, forgetting the reason she’s there in favor of opening her adorable honest mouth, “If you’re willing to leave career decisions completely up to other people, then let other more dedicated scientists take your amazing opportunity for you!”

But let’s go talk to this episode’s only happy couple.

Zoisite: The blue Rainbow Crystal is in Motoki’s girlfriend.
Kunzite: She’s pretty.
Zoisite: HOW COULD YOU SAY THAT KUNZITE I THOUGHT YOU THOUGHT I WAS PRETTY AND SHE’S REALLY A HIDEOUS MONSTER ANYWAY.
Kunzite: Shh, bby, shh let me compare your beauty favorably against this rose I just conjured out of thin air.
Zoisite: Ooh presents. 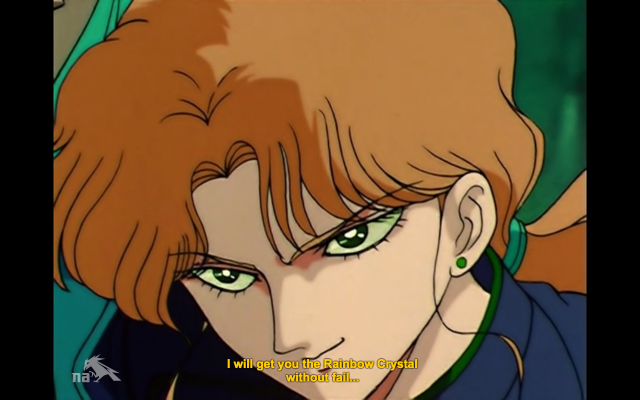 Wait… SCHISM WITHIN THE DARK KINGDOM???

IS KUNZITE PLOTTING AGAINST QUEEN BERYL? You guys have no idea how hard I would witch cackle if this series devolved into open conflict between Captain McShirtopen And His First Mate And I Mean Mate Here and Queen Beryl, Our Lady of the Spherical Theremin. Please, Sailor Moon, upgrade Dark Kingdom Drama into Dark Kingdom Conflict.

The next day, Makoto and Usagi visit Motoki’s apartment together to cook him food (cue Usagi’s ridiculous proposal fantasies and her ineptness in the kitchen) when he gets a call from Reika saying that she’s made her decision and wants to tell him in person. So of course he leaves immediately, expecting that these two girls who he knows have crushes on him will watch his house and cook him dinner while he goes out to see his real girlfriend. 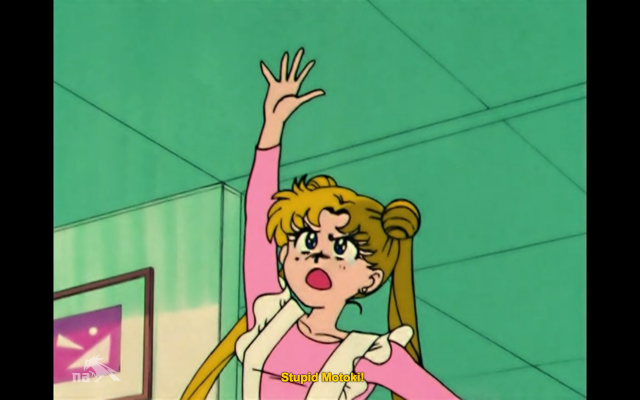 It’s evening, he’s STILL not back, and the Moon Wand goes haywire so YES GOOD LET’S PUNCH A MONSTER UGH. Zoisite has imprisoned Motoki and Reika in a burning ring of fire, and when Motoki tries to defend his lady’s honor he gets knocked the fuck out. Zoisite takes the blue Rainbow Crystal and awakens the youma Rikokeida within Reika, a lab science themed youma! 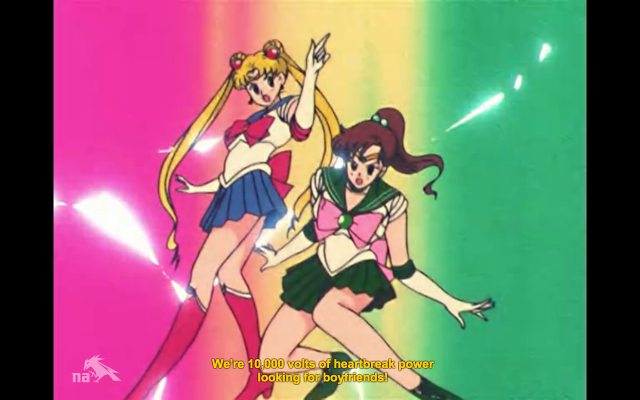 Since Sailor Moon never lets an opportunity for its villains to mock the heroes regarding their relationship (or lack therof) to a man go by, Rikokeida does that. Tuxedo Mask shows up to snatch the Crystal from Zoisite, descending into a bro fight in the background as Rikokeida uses her magical Erlenmeyer flask to capture Sailor Jupiter’s Supreme Thunder attack and redirect it at will, stymieing Sailor Moon and Sailor Jupiter. Fortunately, that’s when Mercury and Mars arrive. A few special attacks, one reminder to use lab equipment responsibly (not a joke), and a Moon Healing Escalation later, Reika is saved.

“Looks like they’re done over there,” is a thing Tuxedo Mask ACTUALLY SAYS to Zoisite to indicate that they might want to wrap up their fight. “I’ll give you the Rainbow Crystal,” says Zoisite. “Really?” asks Tuxedo Mask. “LOL NO,” says Zoisite, and disappears. I’m paraphrasing, but not joking. I do not like the good guy plot arcs of this episode, but I do like the bad guys, oh man. Reika and Motoki reunite and we cut to…

…the airport! Because Reika decided that spending a year in Africa to advance her career was the right choice! Motoki says he’ll wait for her as long as she needs, as Usagi and Makoto who are there, for some reason, look on, get mushy, and then resolve to still pursue Motoki. *sigh*

I’m becoming increasingly peeved the more I think about how Zoisite was dubbed with a female voice in the original American version of the anime. I mean, at this point we’re still two or three years from Xena and Gabrielle hitting Western television, so I understand that the motivation was much more about keeping a physically intimate, out, gay couple off of kids television, but damn if female!Zoisite isn’t just a ball of incredibly dated female villain tropes. She’s vain and scheming, she responds to the slightest implication that she may not get her way with emotional breakdowns and temper tantrums, and she depends entirely upon the approval and suggestions of a male character who should be her equal.

But male!Zoisite actually breaks trope convention. He’s one half of a gay male power couple, and while vanity, schemes, and over-emotion are all frequent aspects of the classic (and not-so classic) Hollywood Sissy Villain, he breaks one of the grossest characteristics of that trope: he never hits on or is sexually threatening to characters around him, as if every gay man had, deep inside them, a sexual predator screaming to be let out. And those traits of vanity and over-emotion are subverted by the cool as a cucumber personality of his romantic partner Kunzite. Zoisite is a gay villain whose sexuality is never framed as a threat, and that’s vanishingly rare in in widespread media. Also, unlike Hollywood under the Blue Code, there’s nothing closeted about Zoisite’s relationship. He’s got his man, he’s got his plan, he’s got his impeccable sense of style and unflappable self-esteem, and he’s going to get the Legendary Silver Crystal, dammit.

I look forward to finding all these things out. To avoid spoilers, comments on this post are locked. If you have something to say, say it on our Facebook. Or talk to Susana on Twitter!