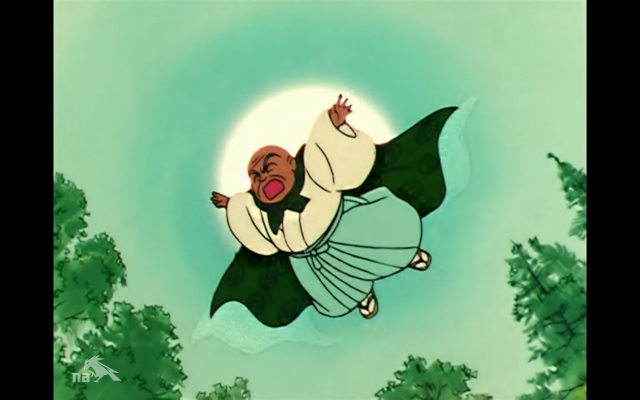 This is not how I remember The Dark Knight Returns.

It’s Dateline: Sailor Moon, and Rei’s grandpa is acting real weird. Mood swings, wearing a cape, excessively difficult and physically demanding training regimens for his young mullet-ed apprentice… he’s Batman, is what I’m saying, he’s turned into some kind of Batman. The Senshi are all pretty confused by this, and Rei’s worried about what this will mean for the health of her family’s shrine, but the audience knows what’s going on.

That’s because we watched the episode opening, in which Zoisite showed up to extract the indigo Rainbow Crystal from Rei’s grandpa, only to be flummoxed by his mystical grandpa powers. Now we know where Rei gets it from, I guess. But before Zoisite could be driven off the premises by Rei’s two ravens (“What are you doing?” he shouts, “I’m not garbage!,” and I laughed and laughed), he manages to partially awaken the Great Youma within him. Hence all the mood swings and an enjoyment of swinging through trees: the Great Youma Jiji seems to be at least partially ape-like or ape-inspired.

Additionally, a young vagrant (I guess? He’s sleeping on the shrine steps. Or maybe that’s part of the whole applying for a shrine job package? I mean, I don’t want to jump to the conclusion that anything in Fight Club was accurate.) named Yuichiro Kumano arrives and begs Grandpa for a place as his apprentice, either because he’s really into working at the shrine, because he has a sudden big crush on Rei, or some combination of the two.

So, back to the Senshi. They all agree that Grandpa’s acting pretty weird, but Rei’s hardline protectiveness over the workings of her family shrine don’t make her very receptive to ideas about the situation, and her angry response, shock of shocks, leaves Usagi in tears. Only this time, for once, everybody else is on her side! Ami and Makoto tell Rei that if she’s gonna lash out at people who are only trying to help her, they’re gonna head off to cram school and kung fu practice, respectively, until she cools down.

Which neatly gets Ami and Makoto out of the way so that the episode can drill down on its A, B, and C plots. A) Rainbow Crystal doings, B) Usagi’s attempts to get back into Rei’s good graces, and C) Rei and Yuichiro’s burgeoning relationship. We begin with Yuichiro actually offering Rei pretty decent advice for her situation: sometimes people just get in funny moods, and there’s no reason to freak out about your family’s business model after only a day or so. Why not wait and see if Grandpa calms down?

Well, it’s good advice if you don’t count the whole Dark Kingdom interference, but neither of them know about that, so it passes. Watching from the bushes (not an unusual post-argument place for her to be), Usagi decides that the best way to make up with Rei would be to interfere with her love life. That is, she thinks that because Rei and Yuichiro have spent a couple quiet minutes together, they’re obviously romantically inclined towards one another, and she knows exactly what she can do to help that. 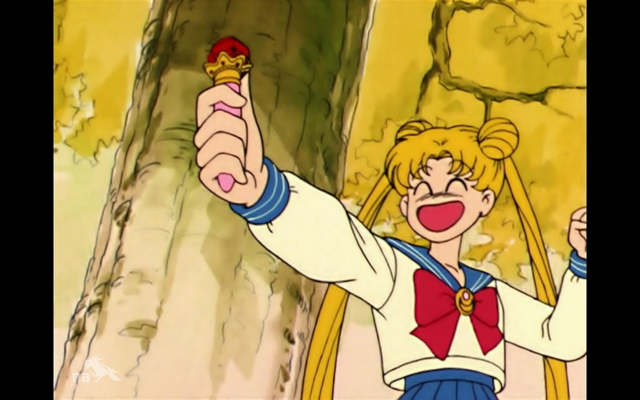 And it involves her disguise pen, to the surprise of no one.

Also surprising no one, Rei sees through Usagi’s disguise (of a fortune teller of love, and for once she doesn’t specify that she be attractive, I think because she’s disguising herself as a man?) at once and is so insulted that Usagi would try to manipulate her into cheating on Mamoru that she tells her they are no longer friends.

Well that’s gonna be awkward at the next Senshi strategy meeting. Usagi heads home, dejected, until she realizes that they have delicious rice balls at home and that she can make up with Rei by giving her a present of food. This… is actually not a terrible idea, Usagi. You just might want to wait until it’s not the middle of the night.

Or don’t, because your need to strengthen your friendships will bring you back to the shrine just in time to save the day. Because, as we speak, Zoisite has appeared at the shrine again, and this time he succeeds in extracting the indigo Rainbow Crystal and waking the youma Jiji, though not without alerting both Rei and Tuxedo Mask to the situation. Tuxedo Mask challenges Zoisite to a fight and… 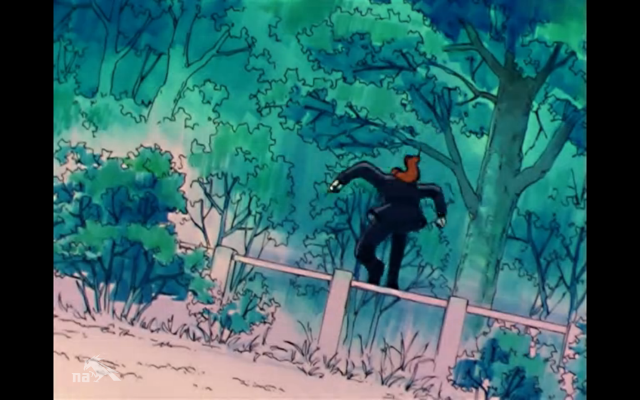 Tuxedo Mask chases Zoisite into the woods and they are not seen again in this episode.

Because he’s out “training,” Yuichiro is the first to encounter Jiji on the shrine grounds, and he attempts to play the strong male character by protecting Rei, even to the point of physically fighting the youma. And maybe that training paid off, because he does a sight better than Motoki, lemme tell ya. That said, he still gets KOed almost immediately. Rei’s psychic abilities clue her in to the truth: the monster that’s trying to kill her is her beloved grandpa! It seems like playing to the Grandpa within the youma is about to pay off, much as it did for Ami and Urawa, but then Jiji smashes an entire statue where Rei’s head used to be, so not so much.

Fortunately, this is when Usagi shows up with her rice balls. Rei gets an opening to slap Jiji with an o-fuda, and one Moon Healing Escalation later, we’ve got Grandpa back and everybody happily eats rice balls ever after.

Well, then Ami and Makoto show up to make sure that Usagi and Rei have patched things up, because the inherent fragility of female friendships is something that needs to be addressed quickly before it escalates into friend breakups. This is a thing the show has been mentioning all episode, that female friendships are fragile things and that women are quick to abandon each other once arguments start, and I’m not sure how to feel about it. On the one hand, that could be a genuine attempt to depict the sort of girl-on-girl rivalries common in young folks who have yet to discover their own internal misogyny. On the other, it could be a weird statement about how women are fickle and have like crazy mood swings, LOL.

Like I said, not sure how to feel about it.

I admit that I think there’s some cultural context I’m missing with Yuichiro’s role as apprentice, but to his credit, if he’s here (at least partially) to woo Rei, he’s doing it in a way that’s pretty unique for the show so far. Yuishiro is attempting to impress Rei, not by flirting with her (as Usagi would to the best of her limited ability), by attempting to put her in social debt to him (as was Makoto’s strategy with Motoki), or by concocting a small scheme (as Rei did to get her first date with Mamoru). He’s just trying to be the best shrine apprentice he can be, in the hopes that being the best version of himself will be enough for her.

I smell a rebound boyfriend being set up for when Mamoru is revealed to be Usagi’s star-crossed lover! And I approve of this potential shrine-caring for power couple, no matter what Grandpa says at the end.