Hiiide your face so the wooorld will never... whoops, sorry, wrong masquerade. 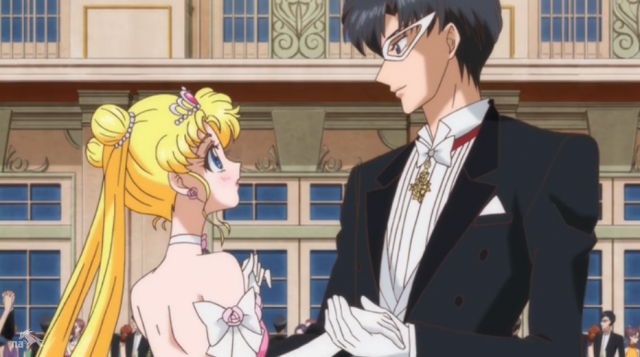 Sailor Moon Crystal‘s really been chugging along so far, huh? In this episode, Moon, Mars, and Mercury work together for the first time to find their princess and the Legendary Silver Crystal. It’s incredibly sweet and finally starts deviating from the original manga story, but there’s one change they made that I kinda wish they’d kept true to the source. Which one? Read on to find out!

As always, spoiler alert for those who are unfamiliar with either the original anime or the manga. If you’re just starting out with the series, Susana Polo’s Sailor Moon newbie recaps of the ’90s television show will probably be way more up your alley.

Since we don’t have a new senshi to introduce, we start with Luna in her mysterious Silver Millennium computer terminal, looking over what she knows. You’d think the computer would maybe have a clue as to who their princess might be (like hey, funny how there’s a Moon Princess and a “Sailor” Moon, RIGHT), but no such luck. What it does have is the secret identity of Tuxedo Mask, whose motives are still unclear to Luna. 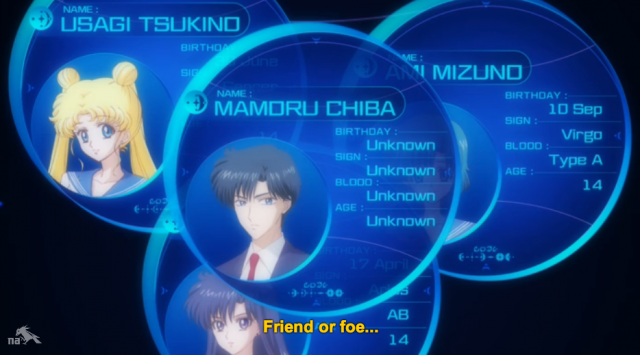 As we remember from previous episodes, Luna had some information on Rei long before she was revealed as Sailor Mars. So how come she doesn’t have any on Mamoru? Is it because he’s incapable of being a senshi, so his blood type doesn’t actually matter? I have so many questions, talking magic cat!

Luna wakes Usagi up the next morning to get her to school on time, and while Usagi’s multiple bedtime odango bows have never made sense to me (I wake up sometimes with my single hair scrunchie across the room, so how is her very complicated hairstyle so perfect upon waking up?) I appreciate that they’re still a thing. Downstairs, Ikuko is reading the paper and remarking about how cool Sailor Moon is and how Usagi should be more like her. Weirdly, the image in the paper shows her using an attack that she doesn’t actually begin to use until later in this exact episode. Ikuko, maybe stop worrying about your daughter and figure out why you appear to be in a reboot of Early Edition. 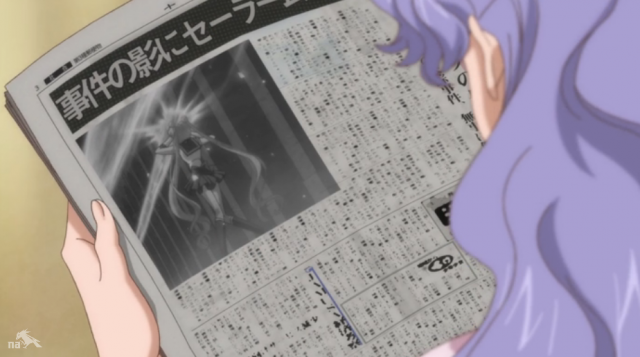 On the way to school, Usagi notices a shocking amount of police security on the streets. It’s because a princess has arrived from the “Kingdom of D,” Naru and co. tell her. Princess D will also be unveiling the country’s “Legendary Secret Treasure” to the world at a party later that night, and Luna’s ears perk up. Mysterious Princess from a made-up foreign nation? Legendary secret treasure? This all sounds familiar.

At the arcade, Rei and Ami are bonding over how good at computer games Ami is and their shared love of Usagi, who despite her shortcomings was able to bring them together as friends. It’s a very adorable scene, but so far Rei is very… un-Rei-like, for me. I knew better than to expect the same antagonistic, hot-headed girl from the anime, but even in the manga Rei is a bit more unwilling to trust the other girls at first. As sweet as it is that Crystal Rei is so happy to belong somewhere, I miss the cold, pragmatic Rei I came to love. 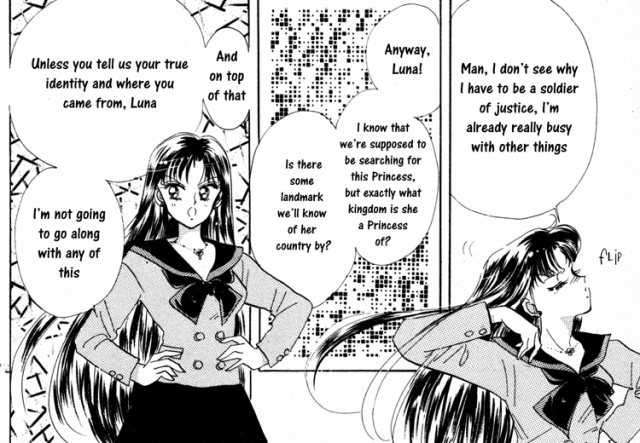 If Rei had been in Madoka, that show would have been a lot shorter.

Luna explains to them that even though it’s their job to guard the princess, she doesn’t actually remember anything about what the princess is like, which she suspects is because that knowledge has been magically sealed off to all of them as a way to protect her and the powerful Legendary Silver Crystal from their enemies. But she knows there are four senshi in all, so once the missing girl is awakened, the princess should be revealed to them. Usagi’s supposed to be the leader, but she’s too busy fantasizing about going to Princess D’s fancy dinner party, despite the fact that Rei has a bad feeling about the shindig and refuses to let her go. Gee, Rei, as a guardian of justice maybe you should be heading towards the bad feelings? Because they might be monsters? But I appreciate how protective of Usagi you are already.

Meanwhile, I was right! Jadeite is totally still alive and taking crap from all the other generals, including newly-introduced Kunzite. Beryl reminds them that they really need to go find that Legendary Silver Crystal to revive their great ruler, but even she isn’t convinced of its power. Is that the magical seal clouding her memories of the Silver Milennium, or does she really not know?

Back in Juuban, Usagi finds out that even her dad is going to the dance party tonight, and that is the last straw: she uses her Disguise Pen to transform into a princess. 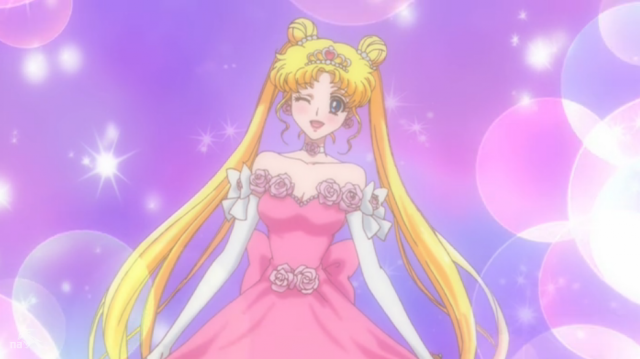 Complete with a very appropriate crown that should look super familiar to longtime moonies.

Usagi, Ami, and Rei all head to the party to investigate, and are separated from Luna because there are no pets allowed. Usagi also distances herself from her friends to check out the main dance hall, where she despairs over not having a hot date to dance with. Enter Tuxedo Mask, who picks up her monogrammed handkerchief, appears to figure out that she is Sailor Moon, and invites her onto the dance floor. It’s all very romantic and sparkly right up until Tux notices Luna, who snuck in via the balcony, and flees.

While this is all going on, Ami and Rei are doing very serious senshi investigation, and figure out that the woman with Princess D (who looks a whole bunch like Umino, complete with spiral glasses) is up to No Good. They follow her up into the palace just as she reveals herself to be Nephrite in disguise. Damn it, Nephrite, dressing up in drag is Zoisite’s thing!

Nephrite uses his power to possess Princess D, who immediately runs off to steal her own secret treasure. Ami and Rei follow after her after transforming, but lose her in the ballroom, where she casts a spell to keep the guests from stopping her. In the struggle to return D to her senses, Usagi gets knocked over the side of the balcony and is briefly rescued by Tuxedo Mask before he, too, loses his grip. Luckily, Usagi is effin’ magic and her pen can turn into an umbrella, which… saves them. Somehow. 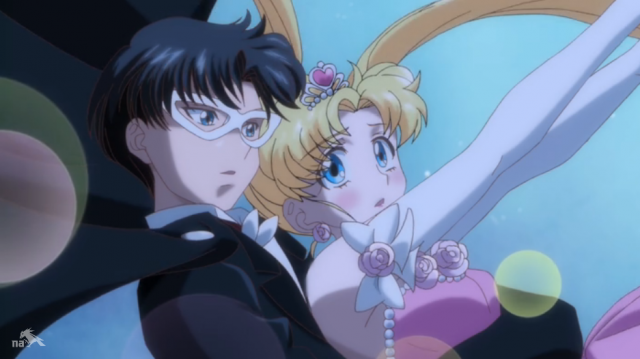 “Yeah, we know this is an iconic moment or whatever, but maybe next time a parachute would be better.”

Tuxedo Mask thanks Usagi for saving him, and she thinks about how warm his hands are for like the thirtieth time. Usagi, was your last boyfriend Edward Cullen or something, or were you just laboring under the presumption that all men have very poor circulation?

She transforms after he disappears, but suddenly the henshin sequence is stopped short (and this is a very effective moment, by the way—the way it breaks up established stock footage is totally jarring and really evokes the shock that she’s feeling) when Sailor Moon realizes that she doesn’t have her tiara—she used it last time to hold Jadiete in place while Mars scorched him, and apparently it never came back to her. But Tuxedo Mask and his hella warm hands come to the rescue, as thinking about how he makes her feel creates a new fancier tiara. It’s cheesy, but I appreciate the fact that it’s Usagi’s feelings and love for the people in her life that bolsters her power.

And bolster her power it does, because you know what Sailor Moon does with that new tiara? FUCK SHIT UP. 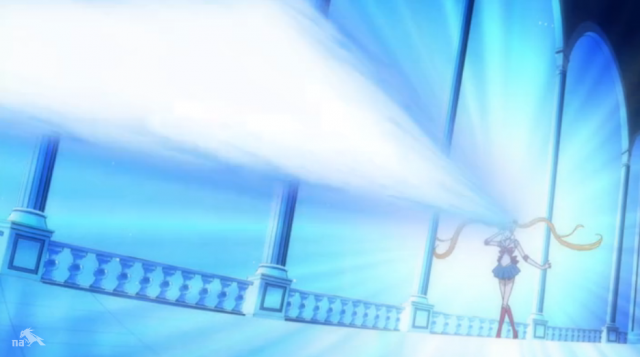 Luna said  KNOCK YOU OUT.

Nephrite releases the princess and jumps off to lick his wounds, and the rest of his Shitennou boy band (that’s a thing, by the way) arrive to tell the senshi that now they’re really gonna be sorry and just wait until next time! The senshi run off, but not before noting that D looks real cute without her glasses. I appreciate how this is played off as an aside moment between the girls, because in the manga and anime D’s face sans glasses is this big hyped-up “oh isn’t she so beautiful and doesn’t know it” kind of reveal that’s stereotypical at best and harmful at worst to glasses-wearers. Here, however, it’s a nice bit of banter between Ami and Rei that really speaks to their growing friendship. Oh also, I guess I should point out that the Legendary Secret Treasure is not actually the Silver Crystal and is instead a bust of one of D’s bespectacled ancestors. But come on, did anybody really think it was going to be the big series Macguffin?

Anyway, Sailor Moon is so tired from blasting giant beams of energy from her face that she goes off somewhere to fall asleep because of course she does. Again, a bit of an improvement from previous iterations of the series where Sailor Moon gets drunk off the punch and has to go lie down—but when you consider what happens next, it’s not that much better. Tuxedo Mask finds Sailor Moon and decides to kiss her Sleeping Beauty-style, and while she has a voiceover that suggest she’s aware, consenting, and even vaguely recalling past Silver Milennium kisses, romanticizing the idea of kissing girls while they’re asleep is maaaaybe not the best message to send to impressionable young viewers. But at least she wasn’t drunk and passed out this time, right?

Thankfully Luna arrives to tell Tuxedo Mask, “hey what the hell go away,”and demands to know what even is his deal. He’s after the Legendary Silver Crystal too, he says, so perhaps the senshi should think of him as an enemy. Well, yeah, keep kissing girls while they’re asleep and we’re gonna have to, bro. 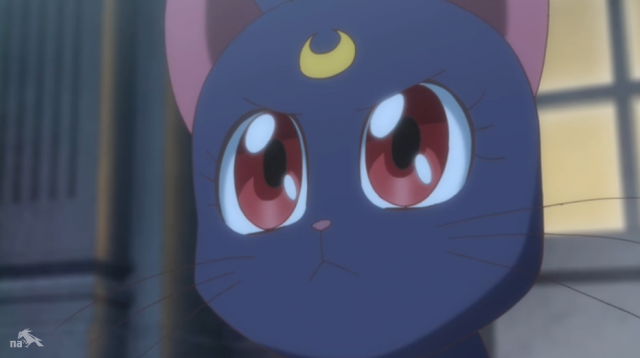 ‘Course, Luna’s one to talk.

Anyway, that’s the end of the episode and while I do lament this version of Rei so far, I thought the animation was overall a lot better then the last few episodes and find it interesting that they’re starting to introduce new plot points , like the Shitennou all being alive (although I do sort of worry that this means they might be pairing them up with the senshi soon, which I’m not a huge fan of). 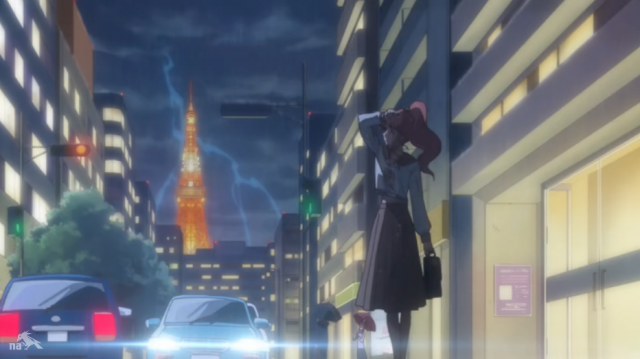