This weekend in Sailor Moon Crystal, we welcome the arrival of the beautiful Sailor Mars. She is just so, so beautiful, you guys. Like, the beautifulest. Speaking of which,  THEY KEPT IN MY FAVORITE MANGA THING OH BOY.

Since I forgot to mention it last week, here’s a reminder that these recaps might not be safe places for those who are watching the original series for the first time, as there may be spoilers. If you’re willing to take the risk, read on! If not, Susana Polo’s series of Sailor Moon newbie recaps are a good place to go instead.

We begin with the Dark Kingdom, where Jadeite is gettin’ reamed out by Queen Beryl for his insufferable incompetence. But! A challenger approaches! Two, as a matter of fact, for both Nephrite and Zoisite arrive on the scene to cattily undermine him. We don’t get much insight into their personalities here, but I appreciate that Nephrite thinks that he has to remind Beryl of the fact that he works for her, whereas Zoisite simply arrives and allows Jadeite to angrily announce his presence for him. 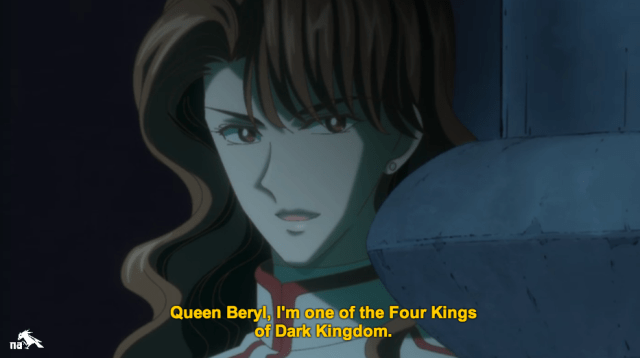 You could be the king but watch the queen conquer.

As they’re discussing the Legendary Silver Crystal, we see Rei watching the scene in the flames using her fancy psychic powers. “Uh oh, shit’s fucked,” she says. Well, okay, I might be paraphrasing.

Speaking of shit that’s fucked, Rei has a young  friend called Mii who mysteriously disappears without a trace one day. It’s because of the demon bus, Usagi’s middle school friends tells us; if you get on the bus on the Sendaizakaue route when it pulls up to the Hikawa Shrine at 6pm, you’re never heard from again. And yet, no one has investigated its connection to any actual disappearances? And people still willingly get on the bus route? C’mon, guys.

Although, to be fair to the Sunnydale Syndrome-suffering citizens of the Juban distract, their most powerful protector is sleeping on the job. 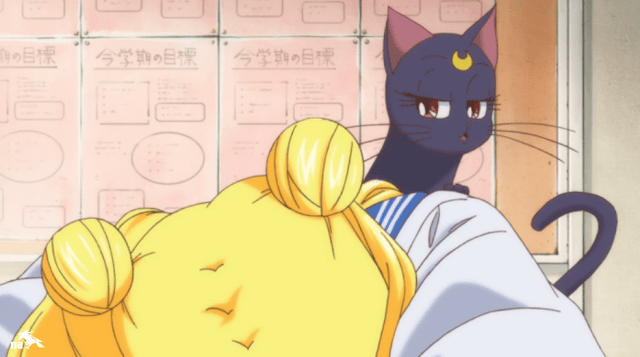 Usagi and Luna: a portrait.

And when she’s not sleeping, she’s busy playing video games while Ami and Luna (who appears to enjoy being held like a little cat baby) discuss the Silver Crystal and their duty to protect their princess. But at least Usagi’s game-prowess gets them cool, incredibly useful prizes like communicator watches! And she didn’t even have to physically beat the arcade game into submission this time. That counts as character growth, right?

Arcade time is cut short, however, as Ami has to get to cram school. But there’s this really pretty girl she sees on the bus sometimes, she tells Usagi. As much as I love the idea that Ami noticed Rei long before the two were awakened to their destinies as sailor senshi, I love the idea that both girls are seeking out other pretty girls on the reg even more. And so does Sailor Moon Crystal, because LOOK: 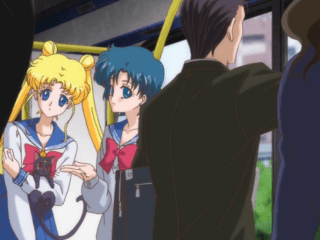 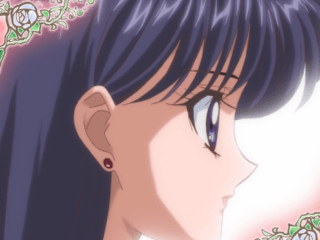 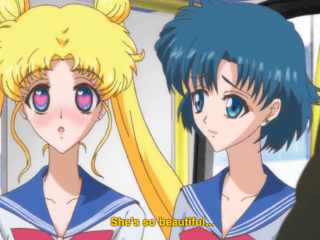 While it’s fairly common knowledge to most viewers that Usagi and Mamoru are endgame, one of the greatest things about Usagi as a character is that she’s constantly crushing on people of all genders. While in the manga this scene is played off as cutesy, here the reboot’s commitment to keeping the characters pretty and weirdly open-mouthed at all times really does make the encounter feel like a serious, legitimate attraction. Even if you don’t read this as a bisexual Usagi (which I firmly believe you should, by the way), it’s refreshing to see how her love for the people she wants in her life manifests so immediately and overwhelmingly. Usagi is a girl who is not afraid to feel her feelings, and while Ami does point out that staring can be pretty rude, the show doesn’t attempt to suggest that these feelings are wrong in any way.

Usagi’s interest in Rei is so strong that she ends up following the girl off the bus and into the shrine, where she’s immediately attacked by Rei and her crow familiars, who all feel a supernatural presence coming from Usagi and assumes it’s demonic in nature. Usagi doesn’t mind, of course, because did we mention that she thinks Rei is really beautiful? But Rei is in no mood to be flirted with, as she’s just learned from Mii’s mother of his disappearance, and she knows it has something to do with the bus that spirits away its passengers.

Galvanized by her new friend’s distress, Usagi spends the next day investigating the “Demon 6:00 Bus.” Luna tells her and Ami that as a noble shrine maiden with mysterious powers, Rei might be the princess they’re looking for, so Usagi returns to the shrine for a visit. She also learns a valuable lesson in not talking to her hyper-intelligent cat in public about senshi matters, because guess who overhears them. 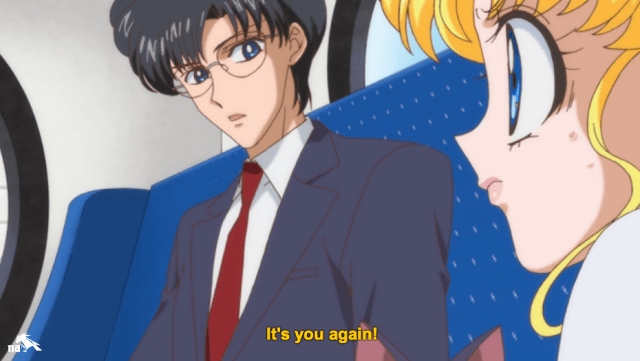 I didn’t recognize him without the wad of paper stuck to his face.

It’s Mamoru, who is, as the show very deliberately stresses, a 17 year old card-carrying high school student who’s definitely not significantly older than Usagi this time around, thank you very much. They talk about the demon bus and Mamoru dramatically takes off his glassses, which causes this to happen:

(Gif via SailorMoonCrystal2014 on Tumblr)

So, just to reiterate: attraction towards Mamoru is met with awkward embarrassment and cat disguises. Attraction to Rei is met with OPEN FACED STARING AND HEART-EYES. I love you, show.

Mii’s mother and her friends are not so enthralled with our favorite shrine maiden, however, demanding that she use her powers to find Mii and accusing her of having something to do with the child’s disappearance when she refuses. Usagi immediately jumps in to defend her, because how dare you be mean to a beautiful girl, parents! Especially when she is so beautiful! Rei, fed up, yells at the parents to leave the shrine and admits to Usagi later that people have always acted coldly towards her because of her powers. “You shouldn’t be involved with me anymore,” she says.

But Usagi’s already wormed her way past Rei’s defenses, because when she starts up her fire again and sees a vision of Jadeite attacking Usagi, she bolts out of the shrine to track down that Demon Bus. Which, surprise! Is being driven by Jadeite, who engages in some Rei-napping. Usagi sees unconscious Rei in the bus as it drives by and grabs onto it as it teleports away, losing Luna in the process. Oh, also, she transforms into a flight attendant. Why? Because she has to ensure the safety of all the passengers. Duh.

Oh, yeah, remember that time in Sailor Moon Classic when Tuxedo Mask drove a series of linked-together flying buses out of an alternate dimension?  In Crystal, he catches a cat. Good job, Tuxedo Mask. You do very important work.

Speaking of that weird alternate dimension, in Crystal it’s actually just the Dark Kingom Headquarters. Nephrite points out that kidnapping so many people is a stupid plan, but Jadeite maintains that it’ll totally get the senshi’s attention. You know who gets Jadeite’s attention? Unconsious Rei, for some reason. While this scene has manga precedent, I’m not a big fan of the Rei/Jadeite pairing, so I was pretty pumped when Sailor Moon (and Mercury, who is somehow able to track the energy of Usagi’s senshi transformation and teleport to her location) interrupts him. 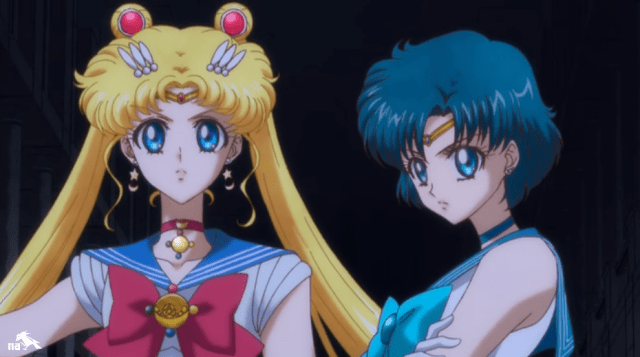 “Get away from our beautiful friend, who is so very beautiful!” “Hey Sailor Moon I think you might be overdoing—” “BEAUTIFUUUUUL.”

Jadeite attacks them with…. ice powers? Well, okay. That’s new. But also perfect, because you know who’s gonna be real good at melting ice in a couple of seconds? Rei, who’s woken up and immediately recognizes Sailor Moon as Usagi. Excited not to be the only person she knows with superpowers anymore, Rei goes after Jadeite, and Luna throws a transformation pen at her. AW YEAH, HERE WE GO.

Mars’ transformation is my favorite so far. The computer animated fire works perfectly in a visceral way, and the vaguely chantlike background music was a great nod to her spiritual side. The visuals accompanying her speech, however, did not wow me, as the animation felt really sloppy at times (as did this whole episode, unfortunately), and this pose in the middle kind of… well… um. 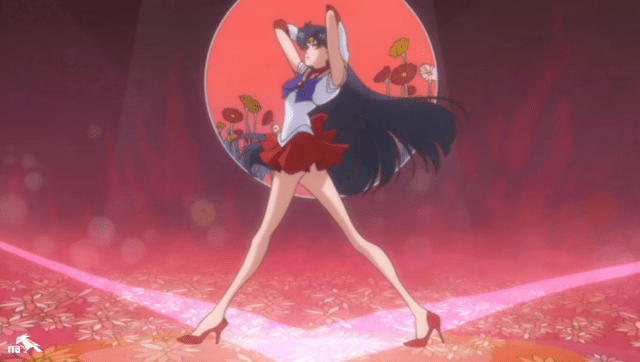 Although it was pretty fun to reenact with my action figure, not going to lie. 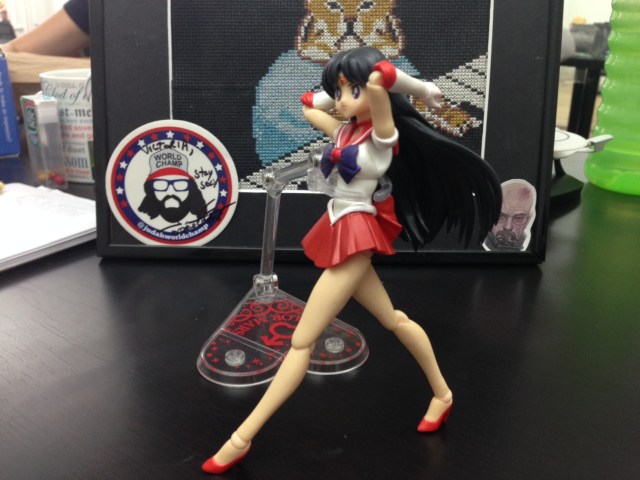 But anyway, Sailor Moon traps Jadeite with her boomerang, and Sailor Mars takes the opportunity to engulf him in flames with an “Akuryo Taisan.” In the manga, this is where he is disintegrated. However, to my untrained eyes it sort of looks like what he actually does here is teleport away, just like in the anime episode where the senshi throw an airplane at him. I do sort of hope it’s the latter—the shittenou are a lot more interesting when they’re allowed to develop as characters, and despite being my least favorite, Jadeite deserves a little more of a personality. Also, I kind of want Beryl to yell at him some more. I do so enjoy it.

Back at the shrine, Mii is reunited with her mother, and Usagi, Ami, and Luna officially welcome Sailor Mars to the team. I’ve always been drawn more to the passionate, brash Rei of the anime, so this cooler and more elegant manga interpretation is a bit harder to immediately relate to (especially compared to Ami, who is a little sad puppy you just want to love). But I’m pretty confident that the Crystal team will be able to develop the character in an interesting way, and I live for the big dorky smile she gets on her beautiful, beautiful face when she realizes she has friends now.

Speaking of things I live for: imagine my joy when, after the word-for-word recreation of Jadeite’s untimely manga end, they cut to this airplane. 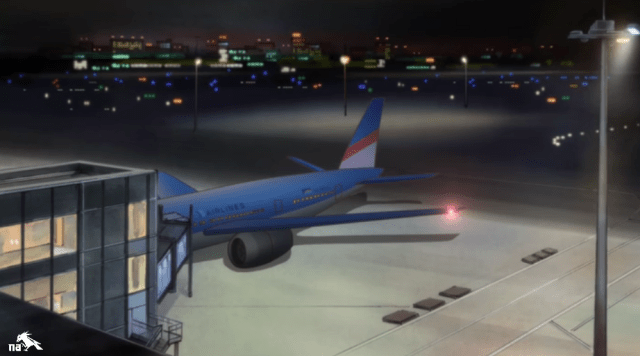 Do you know how expensive those are???

I see what you did there, Sailor Moon Crystal. Y’all draw some weird faces and proportions sometimes, but damn it if you don’t know what I like.

(all manga scanlations via Miss Dream)