Comixology Speaks on Saga #12 Ban: It’s on Us, Not Apple 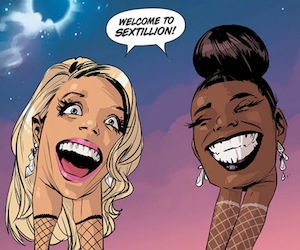 As a partner of Apple, we have an obligation to respect its policies for apps and the books offered in apps.  Based on our understanding of those policies, we believed that Saga #12 could not be made available in our app, and so we did not release it today.

We did not interpret the content in question as involving any particular sexual orientation, and frankly that would have been a completely irrelevant consideration under any circumstance. – Comixology, in a statement about the removal of issue #12 of Brian K. Vaughan and Fiona Staple‘s Saga from the Comixology store for iOS devices.

Yesterday a lot of the comics world got up in arms to defend this week’s issue of Saga from what even the book’s creators thought was censorship from the folks who run Apple’s online content marketplace. Since Saga is already a comic with lots of lovingly depicted violence and sex (and wonderful characters, humor, and themes like love, war, and parenting), this seemed even stranger. The only new thing in this issue appeared to be that there were a couple tiny depictions of graphic sexual acts performed by men with men. Comixology does not elaborate more on why they felt Saga #12’s content went over what they thought Apple’s line was, and I wish they would, simply to emphasize their statement that sexual orientation had nothing to do it. I’m also glad they end with an apology: as a retailer it’s Comixology’s responsibility to communicate to creators about why their books won’t be appearing for sale where they usually do before any misconceptions can be made. Comixology has word from Apple today that Saga #12 does not violate guidlines, and says the issue will be up for purchase through iOS devices soon.