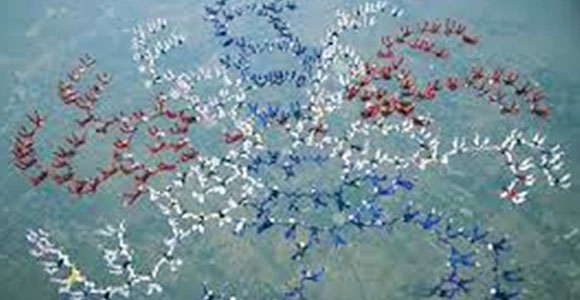 A group of skydiving lovers from Russia have just broken a world record. Yes, that is them in the formation you see above. Hit the jump to find out the amazing feat these 88 women pulled off.

The ladies go by the name the Pearls of Russia and this was their third attempt at an intricately choreographed jump which is referred to as formation skydiving. “The 88 member ‘Pearls of Russia’ women’s skydiving team has just successfully pulled off a white, blue and red flower formation jump in the skies over Kolomna near Moscow, setting a world record for women’s parachuting,” says the description of the video below.

The NY Daily News reports the Pearls “took off twice from an airfield about 70 miles southeast of Moscow before ascending again in four aircraft to about 20,000 feet. From there, they tumbled hand-in-hand to form a flower before pulling their respective rip cords.”

“If one of these girls will do skydive not too good, we will have no result,” said Ilona Kireyonok to Russia Today before the jump. “It’s very important.”

The previous record was held by a group of 84 German women. The Pearls also had to overcome some bad weather on their final attempt but eventually made it into the skies in four planes.

The women are now looking forward to breaking their next record.