The Russian Meteor Sent a Shockwave Around the Earth Twice

The explosion went there and back again, then back again again. 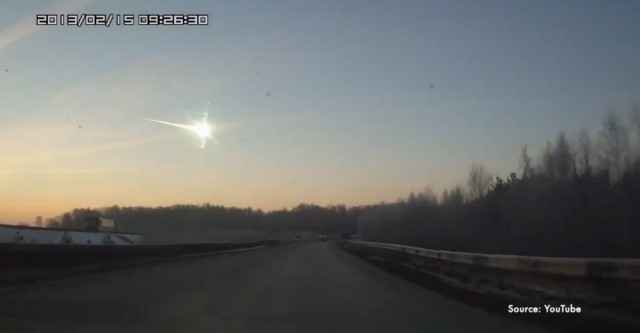 Back in February, an unexpected meteor entered the atmosphere and exploded about twelve miles above the Earth’s surface over Chelyabinsk, Russia. It took the world by surprise, and it’s still the subject of study to find out what happened, how we missed it, and hopefully how to stop things like it from happening in the future. The latest data on the meteor shows the shockwave from the explosion circled the Earth twice.

This NASA ScienceCasts video explains the meteor, how it was unrelated to an asteroid making a nearby pass to the Earth that same day, and why we didn’t see it coming:

Data from the infrasound sensors mentioned in the video from the International Monitoring System, which is operated by the Comprehensive Nuclear-Test Ban Treaty Organisation, tracked the results of the shockwave. These are normally used to monitor nuclear events, but the explosion was big enough that it was equal to 30 Hiroshima atomic bombs.

The sound waves detected by these sensors are so low that humans can’t hear them, and in fact only a few animals like homing pigeons can. It could even be how they find their way home. Infrasound can travel much greater distances than higher frequency sound waves, which could explain the incredible distance the wave traveled.

Hopefully the data we can get out of this event can help us better understand the threat of asteroids hitting the Earth, or at the very least it can show people that it’s a real possibility that needs to be addressed. Thankfully NASA and other agencies have projects in place to help detect and deflect asteroids. Now we just need to properly fund NASA so we don’t die in a fiery ball of doom.

(via BBC News, image via NASA)