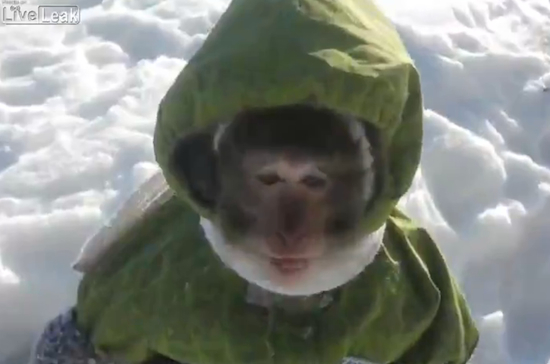 Remember that sharply dressed monkey gallivanting about a Canadian IKEA, putting employees and store patrons on edge? Course you do, how can anyone not remember something as poignant as that? Well, in an obvious push to dethrone North America as the world’s preeminent purveyor and manufacturer for viral and productivity-killing videos, Russia has presented its own version of the aforementioned primate in a coat. As much as it pains us to admit this, Mother Russia’s snow-loving simian might just exceed the IKEA monkey in the lose-your-mind-over-the-unbridled-cuteness department. Honestly, how do you expect the IKEA monkey to compete with a tail warmer and monkey-sized scarf?

You have to give the Russian IKEA monkey’s owners credit for having the keen foresight to not take him along on an afternoon outing to a big box store. Statistically speaking, that’s where most separations between man and monkey are likely to occur — that’s more than shopping malls and mom and pop stores combined! So remember to keep your furry friends close on shopping excursions, people!