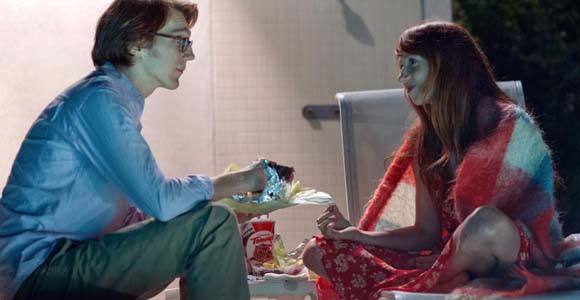 In Ruby Sparks, the second film from the directing duo behind Little Miss Sunshine, Paul Dano plays Calvin, a twenty-something writer who wrote a best-selling novel while still in his teens and has since been struggling to overcome writer’s block and take control of his life. The only person he hangs out with—aside from his smarmy agent (Steve Coogan) and his therapist (Elliot Gould)—is his brother. His number one hobby is procrastination. He hasn’t had a girlfriend in years. But all that changes when he wakes up to find that he’s somehow managed to will fictional character Ruby Sparks—a painter, orphaned at a young age, dropped out of high school after an affair with a teacher, Calvin’s dream girl—into existence.

It’s an interesting premise, one that tackles writing and creativity in a meta sort of way (which I have a soft spot for) while also taking a look at a common trope: The Manic Pixie Dream Girl.

You might not know the name, but you almost certainly know the character. She’s a young woman, attractive, spontaneous and above all quirky—and she exists as a character to fall for the buttoned-down sad sack of a protagonist and shake up his life with her adorable spontaneity. She has assorted issues, but they’re less the mark of a well-developed character than a plot device; her difficulties and flaws are framed in the context of how they bring the main character to some sort of realization about his own life. Smarter, more eloquent people than I have analyzed the trope better than I could, but suffice to say it’s a particular pet peeve of mine. So I was excited to see a movie that addresses its sky-high bullshit quotient head-on.

Given that, maybe I went in to Ruby Sparks movie somewhat biased. But for a movie that addresses the trope in such a blatant way, it really doesn’t do anything all too interesting with it. It’s a cute ‘n’ clever movie, one with a good script (written by Zoe Kazan, who plays Ruby) and impressive acting, especially in the brilliantly disturbing scene where Calvin tells Ruby her unbeknownst-to-her origin story. While the movie’s setup draws attention to just how unrealistic Ruby’s type of character is (Calvin’s brother has a particularly good line about how no woman will want to read a book where the female protagonist is a quirky confection whose only flaws are cute ones), its execution past that point slides back into ho-hum storytelling territory.

Take a look at the relationship between Calvin and Ruby. If she’s a Manic Pixie Dream Girl, he suffers from Scott Pilgrim Syndrome. Despite the fact that he’s a sad sack wet blanket with no real job (procrastination can only be called work up to a certain point, as every writer knows) who makes no real effort to actually do any of the things he complains about not doing, his life is freaking awesome. He lives in a gorgeous house. His financial stability is seemingly unthreatened by his years of writer’s block. At one point he complains that he actually wants to date a girl, not just sleep with one of the countless literary groupies clamoring to have a one-night stand with him. Oh, poor you, Calvin. Maybe I’m being too harsh on him—it’s not like material wealth and an abundance of opportunities for meaningless sex are guarantors of happiness—but honestly, he’s less of a realistic character than Ruby is, and Ruby isn’t even real.

When film critic Nathan Rabin coined the term “Manic Pixie Dream Girl” in response to Kirsten Dunst’s character in Elizabethtown, he defined the MPDG as “that bubbly, shallow cinematic creature that exists solely in the fevered imaginations of sensitive writer-directors to teach broodingly soulful young men to embrace life and its infinite mysteries and adventures.” If that’s true, Calvin might be an extreme embodiment of how that same “sensitive writer-director” sees himself: A sensitive young man who, despite his “literary genius” (but Calvin doesn’t like people to mention that, y’all), just can’t shake his eternal existential ennui. Because he’s so sensitive. Or something.

Everything works out for Calvin in the end with virtually no effort on his part. His great character-growth moment comes when he decides to stop using his magical writer powers to whammy Ruby into staying his girlfriend. Wow, do you want a medal? Am I supposed to feel a sense of second-hand pride that it took you an hour-plus to figure out you should stop being a dick? His traumatic experience having broken though his writer’s block, he’s finally able to pen his second novel. And what’s more—here be spoilers for the ending, avert your eyes if you so desire; I thought about keeping this review more-or-less spoiler free but I can’t not address this—he still ends up with Ruby. Her being released from his spell apparently wiped her memory, so when the duo “meet” in the park, Ruby reading Calvin’s book (crazy random happenstance!), Calvin’s able to get a second shot at making their relationship work.

That, to me, seemed like a cop-out. All the shit that went down the relationship—how awful Calvin was to Ruby, how she was the one hurt by his bad decisions—and then by the end of the movie he has his creativity and the girl of his dreams back, with only a few minutes of token emotional turmoil thrown in to show that he grew as a character, really, he did. Calvin’s unrelatable. Ruby’s unrelatable. Am I supposed to be filled a sense of oh-the-world’s-a-beautiful-place-and-I-love-love! that those crazy kids get another shot at their epic romance?

I don’t know, maybe I’m being unfair. Like I said, Ruby Sparks is a good little cute ‘n’ clever (dare I call it… quirky?) movie, and it’s possible that the degree to which I’m frustrated with it is solely due to the fact that I hoped for something different, something more.

*sigh* You know, it’s really hard to find a bearable rom-com when you’re this cynical.