Russell T. Davies on the Reality of Him Returning to Doctor Who For the 10th “Nu Who” Anniversary

I never actually liked the term "Nu Who." 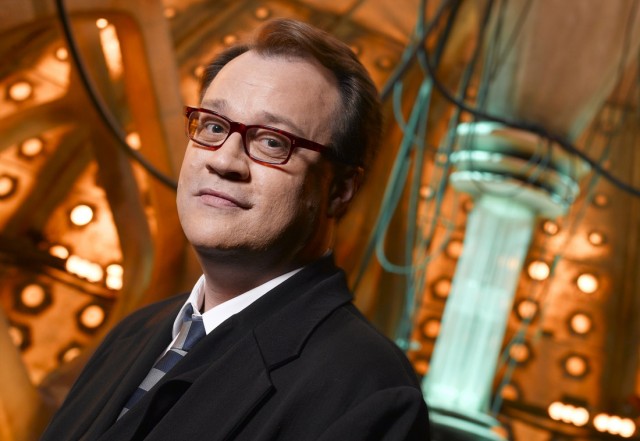 Russell T. Davies stepped down as showrunner for Doctor Who five years after ushering the series back into the public consciousness in 2005. And hey, someone realized 2015 is the 10th anniversary of that relaunch so why don’t we see what he has to say about that…

Speaking with the Radio Times, Davies said the BBC had reached out to see if he wanted to do anything for the 10th anniversary.

“I don’t know what they imagined: a talk or a convention perhaps. I just said no, to be honest,” he said, “A programme can’t have its fiftieth and then it’s tenth. I think that’s just confusing. It’s marvellous and glorious; let it carry on.”

Apparently what, if anything, they BBC will do for the 10th anniversary isn’t even set but Davies has certainly moved on from his time spent traveling the universe (even though his Torchwood stars are game for more). His next two projects explore gay life and are set for Logo and the BBC. But what about just coming back for a one-off?

Would Davies ever write another episode of the hit show? “Wouldn’t that be nice? The lovely Steven [Moffat] invites me every year to come and write one. And I love him and I love them and I love watching it, but here I am, moving on. I love Doctor Who with all my heart but nothing is more important to me than my own stuff.”

Asked whether he continues to be inspired with ideas for the series, Davies laughs: “I made 60 episodes and did 40 Torchwoods and 40 Sarah Janes and there are an awful lot of ways to destroy the world in there.”

Not saying a word.

March 26th is the exact date of the anniversary, in case you were wondering. That’s the day “Rose,” starring Christopher Eccleston and Billie Piper hit TV sets. To be honest, I don’t feel it really needs a celebration other than a nice marathon. I’ll just be over here…