The United States either has to step up its game or just let Romania have this flag-based record. 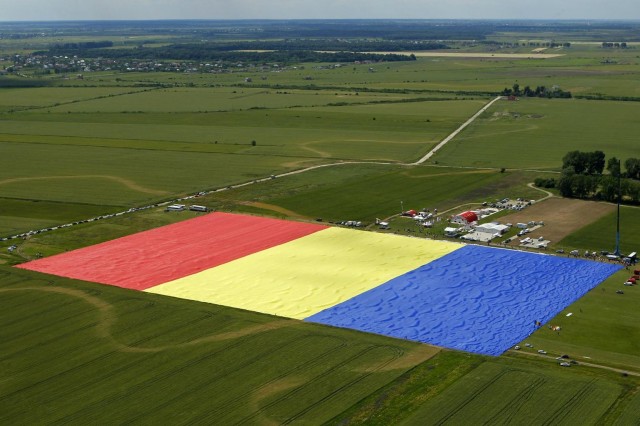 On Monday, a village in Romania unfurled what Guinness World Records has confirmed to be the largest flag ever made in the world. Unsurprisingly, it is a Romanian flag. In a related story, who knew the Romanian flag looked like that before now? We sure didn’t. Then again, there’s a lot of things we don’t know about other country’s flags.

Measuring in at 1,145 feet by 744.5 feet (or 349 by 227 meters if you’re not American, and you actually know things about the rest of the world, like how useful the metric system is), the flag is about three times the size of a football field and covers an area of 853,478 square feet (72,290 square meters). It also weighs five tons and required about 200 people to keep it firmly planted to the ground.

Jack Brockbank, a adjudicator for Guinness World Records, pronounced the flag the biggest in the world after finding that it beat Lebanon’s 2010 record of 706,651 square feet (65,650 square meters) . It was displayed in Clinceni, a village just southeast of Bucharest, and we can only assume that it’s still there because did you see the part where we said it weighs five tons? After carrying the thing out and holding it down for several hours, I’m sure all those volunteers were perfectly willing to just let the dang thing fly away instead of rolling it back up.