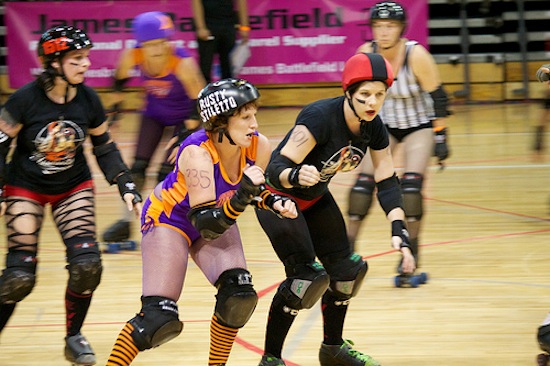 Ready to feel creepy and crawly all over? Your skin is home to a huge variety of microbial life. Every square inch of you is covered in your own personal home brew microscopic creatures that you carry with you every day. Most of them aren’t hurting anything, and some can even be beneficial. But these populations are subject to change, and a study published this week shows that contact sports like roller derby can mingle competitors’ skin microbiomes. That means that even when derby divas leave their all on the flat track, they’re carrying part of their rink rivals home with them.

Though it’s not often thought of as such, the skin is an organ — the largest one we have. And like many of our other organs, it plays host to a variety of microscopic creatures that can help or hinder it. Those microbial communities can differ from person to person, as well as region to region, showed the study, published in the new open-access peer reviewed journal PeerJ. And after a hard day of bumping up against rivals on the flat track, the study suggests those communities can be transformed, and not just into black and blue bruises.

To get a better idea of how skin to skin contact during a sporting event could change microbiomes, scientists at the University of Oregon took to the roller derby track, a venue rightly famed for the high level of contact between contestants looking to bump, bash, and otherwise knock one another out of the way and one of the finest of all spectator sports. Seriously, if you’ve never caught a bout, do yourself a favor and go check out a local league. It is intense.

Taking advantage of a derby tournament that saw teams from across the United States visiting picturesque Eugene, Oregon, researchers took swabs of from the upper arms of skaters from Eugene, San Jose, California, and Washington, D.C. both before and after matches. Prior to playing one another, the derby players had different microbial makeups on their skin, denoting the different places they’d come from. Following the bouts, though, all the players microbiomes looked similar, suggesting that simple contact was enough to change the microbial community makeup of a player — at least temporarily.

The team hopes that their research won’t stop on the derby track, though, saying that it could have implications for public health and understanding of the way our microbiomes interact with urban environments. Something to think about for those of us who get on a train or bus to work in the morning. Or maybe just try actively not to think about.