UTB is a Sport Played With Stun Guns | The Mary Sue 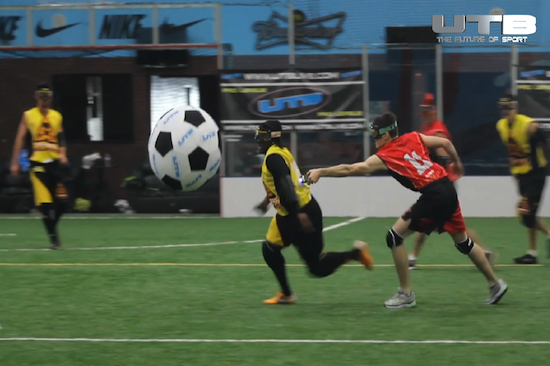 In case you’re curious, this is what happens when professional paintball players get bored with shooting each other: They come up with a game where you shock the ever lovin’ heck out of your opponents with stun guns. Invented by Leif Kellenberger, and apparently not an elaborate hoax, the “sport” uses a large, artificial turf field, a two-foot diameter ball, and seven teammates armed with stun guns. Hilarity ensues.

Originally called “Ulitmate Tazer Ball,” the sport has changed its name to “Ultimate Tak Ball” — no doubt a result of copyright infringement over the Tazer name. The game is sort of an anything goes rugby where players are encouraged to tackle — but not actually punch or kick — their opponents to keep the ball from reaching the goal.

The addition of stun guns is not without limitations, either. The shockers can only be used in the so-called “shock zone” and only players in possession of the ball can be shocked. Also, shocks to the groin and above the shoulders are not allowed. On a practical note, the game is limited to lower power 3-5 milliamp stun guns which do not use projectile electrodes and are designed to only cause localized muscle spasms. So, it’s safe. Or rather: “Safe.”

Personally, I don’t see this having much more than fringe appeal. Beyond the novelty of stun guns and a comically large soccer ball, the game seems to lack the kind of dynamic game play to really make it worth watching. Like the XFL or Slam Ball (which is — no kidding — basketball with trampolines), it doesn’t really differentiate itself from existing games.

With four competitive teams sprinkled around the U.S. and Canada and a major UTB event scheduled for today and tomorrow in Thailand, the game will almost certainly grab some attention. But I can’t help but see players hanging up their jerseys after a few too many shocks.