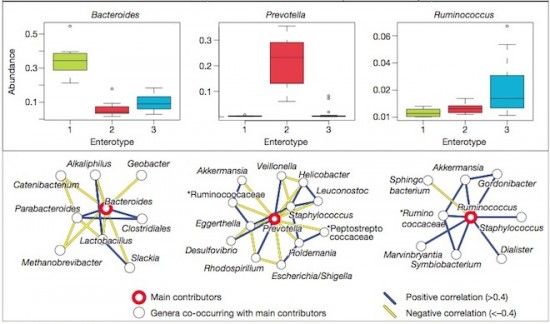 New research published in the journal Nature suggests that the human microbiome — that is, the community of organisms that live symbiotically within humans — may occur in certain set varieties. The study, which sequenced the all the available genes in a fecal matter sample, found that those people sampled fell into three categories they call “enterotypes.”

This research hinges on the growing acceptance of viewing humans as microbiomes. Humans are, after all, made up of many different bacteria and other tiny critters that help us perform fundamental metabolic functions. How these communities are formed is still not well understood, leading scientists to begin identifying the non-human organisms that make up humans. The possibility that humans fall into distinctive enterotypes could lead to a deeper understanding of what goes on within individuals, and possibly better medical treatment.

These enterotypes are being compared to blood types, though the research is new enough that the comparison may not truly be valid. The enterotypes discovered by the team are defined by which bacterial genus dominates the grouping. They found that the genuses Bacteroides, Prevotella or Ruminococcus tended to lead the pack, and defined the three groups.

Because the study is so new, scientists are still unsure of why the groups breakdown as they do. However, these bacteria do excel in specialized areas. Wired reports:

In terms of function, each of the enterotype-defining genera has been linked to nutrient-processing preferences — Bacteroides to carbohydrates, Prevotella to proteins called mucins, or Ruminococcus to mucins and sugars — but far more may be going on.

For their study, the team used 22 fecal samples from Denmark, France, Italy, and Spain. After identifying the three enterotypes, they included 13 samples from Japan and four from America, finding the same patterns. A tantalizing question for future research is if these are the only enterotypes that exist, or if enterotypes exist at all in other communities.

If the enterotype classifications stand up against further research, this line of study could have valuable medical applications, in addition to contributing to a new understanding of human biology. Though scientists have only begun to scratch the surface of the human microbiome, it’s already beginning to sketch a new picture of humanity.

(image and story via Wired)