So, Is Rogue One‘s Chirrut Îmwe a Force User, or Not?

Also, is he dating Baze? 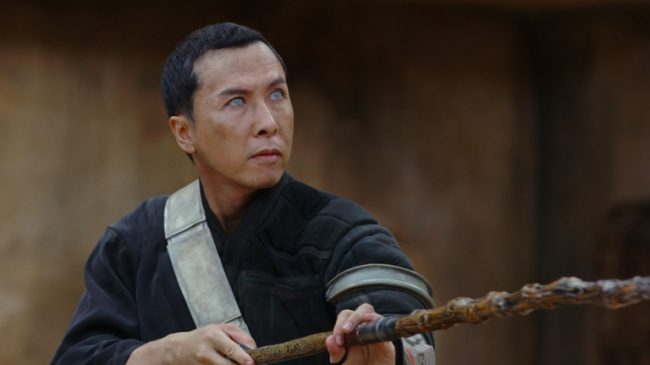 Spoilers for Rogue One, but even after seeing it, I’m still not entirely sure what we’re supposed to make of Chirrut Îmwe’s mysterious powers. He’s definitely not a Jedi; we know that for sure. He seems to be using the Force, though. But, according to StarWars.com‘s official description of the character, he “lacks Force abilities.” So… how the heck does that work?

Before the movie came out, I definitely assumed Chirrut was a Force user, or at least Force-sensitive. I knew he wasn’t a Jedi, but I did assume he’d be using the Force in the movie, based on this quote from Donnie Yen about his character: “I play one of the characters who is connected with the Force. He’s not a Jedi. His line is, ‘I AM the Force.’”

While watching the movie, I thought it was obvious that Chirrut had many mysterious powers, all of which went way beyond just luck—and, of course, I credited the Force with those powers.

Like Toph uses her bending to sense her surroundings in The Last Airbender, Chirrut is also blind and uses the Force to sense his surroundings. I mean, it’s really gotta be the Force that he’s using, because just being a really good fighter doesn’t seem like it would be enough for him to sense all of the things he can sense in this movie.

To list some examples: Chirrut dodges blaster fire and uses his staff to fight off Stormtroopers and any other enemies who pose a threat to his friends and loved ones. He can sense Jyn is wearing a necklace made out of a kyber crystal, which is a Force-attuned stone. Chirrut’s most impressive moment is probably when he shoots a TIE fighter out of the sky with a bazooka. He had to be using the Force for all of that! Right? If that isn’t “Force abilities,” then I don’t know what is.

So, if Chirrut is a Force-sensitive character, and if he’s the same age as the actor who plays him (Donnie Yen is 53), why didn’t he end up getting trained as a Jedi in his youth? Of course, it’s very lucky for the Rogue One heroes that this didn’t happen, because if Chirrut had been trained as a Jedi, he would have very likely ended up getting slaughtered along with the rest of the Jedi a couple of decades before the events of Rogue One. The Jedi are all either long dead (or in hiding like Kenobi and Yoda) by the time Rogue One and A New Hope happen.

Therefore, it makes total sense that Chirrut wouldn’t be a Jedi, because if he were, how would he have survived all this time? It also makes sense that Baze, Chirrut’s best friend and space-husband (more on that later), discourages his partner from talking so much about the Force. If anyone figures out that Chirrut has these powers, then Chirrut could be in serious trouble, and draw way too much attention to himself. To me, that seemed to be a clear source of anxiety for the pair throughout the movie. Using the Force and talking about the Force isn’t just strange and unpopular and outdated—it’s also potentially dangerous, given what happened to the Jedi.

Let’s circle back to that first question, though. Why didn’t the Jedi recruit and train Chirrut when he was a young boy? We already know a little bit about how the Jedi find and recruit potential Padawans from the Clone Wars TV show. In the episodes “Holocron Heist” and “Children of the Force,” we learn that the Jedi Council has a massive database that lists every single Force-sensitive child in the galaxy, and that the Jedi typically go planet-to-planet and door-to-door, offering to take these children away from their parents and train them in the ways of the Jedi.

It’s a lot like the way Hogwarts finds students in Harry Potter, except Jedi kids don’t get to go home on summer vacation. Basically, Yoda (and the other Jedi) sense the potential Force-users all over the galaxy, and they put that information into their records, then go around picking up the kids and taking them away to learn how to use their powers. However, in those episodes, we also learn that not every Force-sensitive child ends up entering into Jedi training, and there are any number of reasons why that might be. Although the Jedi use a firm hand when trying to talk parents into giving up their kids, they still give parents the option to say no.

Furthermore, the Jedi aren’t the only Force users in the galaxy, and their methodology for using the Force isn’t the only ethos that’s available. There are several different schools of thought surrounding the use of the Force, but one of my personal favorites has to be the Nightsisters of Dathomir. The Nightsisters use what the Jedi would call the “Dark Side” of the Force—meaning, they don’t outlaw emotional attachments. However, the Nightsisters don’t necessarily use the Force only in pursuit of evil ends. They each have their own motivations, and their own interesting storylines to go along with them. (By the way, Disney and Lucasfilm, if you ever want to make a Nightsisters movie, that would be great, thanks.)

It’s possible that Chirrut’s family knew their son had a gift with connecting with the Force, but they didn’t want to send him to learn from the Jedi. After all, the Jedi have some pretty unconventional beliefs about suppressing emotions and denying all human attachment. Leaving behind your family at a young age and forcing yourself to become emotionless might not sound that appealing to a young potential Padawan. I know it wouldn’t sound appealing to me!

What’s also interesting about Rogue One is that we don’t actually know exactly what type of training Chirrut has received in the ways of the Force. We do know that he and Baze were both Guardians of the Whills, but so far, we don’t know very much about what that entails, particularly since the Temple that Chirrut and Baze were guarding has long since been destroyed by the time Rogue One begins. In early drafts of A New Hope, “Whills” was another word for the Force, which suggests that perhaps this Temple practiced an alternate form of worship than the Jedi do. Perhaps Chirrut did receive some form of training at this Temple, but it’s no longer something he’s permitted to use or discuss now that the Temple has been destroyed.

In any case, Chirrut has a different background in terms of Force knowledge than what we’ve seen before in the Star Wars universe, and that different approach could explain his unusual abilities. Even though the official Star Wars description of his character claims he doesn’t have “abilities,” I think the actual movie contradicts that, and I think it would be very interesting to learn more about the school of thought to which Chirrut belongs. We already know there are other options for using the Force beyond what the Jedi have to offer, and it looks like Chirrut’s method is a lot more appealing. For one, it’s clear that he’s permitted to have emotional attachment, since he and Baze seem quite attached to one another—which would be a real no-no according to the Jedi.

For the moment, we don’t have any confirmation about the nature of the relationship between those two men, just as we don’t yet have any confirmation about Chirrut’s powers and previous study of the Force. That means that there’s a lot of room within the comic books and future cartoons to potentially explore those characters and answer those questions in a more definitive way. I think Star Wars is ready for some more diverse representations of how to use the Force… and some more diverse relationships, too.