Glove That Lets You Play With Yourself … Wait, That’s NOT What We MEANT 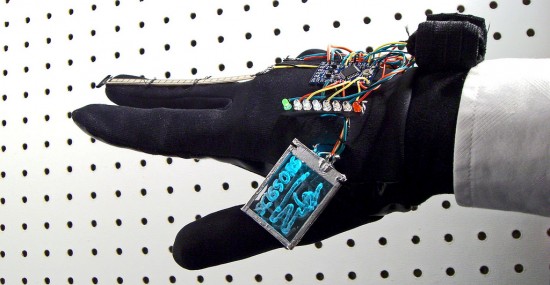 The big bi-weekly LARP at my beloved Alma Mater used a retooled version of Vampire: The Masquerade, which, among other changes, used Rock-Paper-Scissors matches instead of opposed dice rolls.

The glove uses a motion detector to pic up on the three traditional shakes, flex sensors on the middle and ring fingers to detect which sign has been thrown, and then displays its own throw on a thumb-mounted screen.  It also records the score with a row of LED lights, and an “adaptive learning algorithm” strives to learn your Rock-Paper-Scissors style and defeat it.

Hoefer has a complete description of the parts, his process and includes his schematics on his website, here.  Just in case you want to make your own.  Or if you’re, you know, a leftie.