This Brooklyn Teen Will Become the First Female African-American Chess Master, And There’s Nothing You Can Do About It 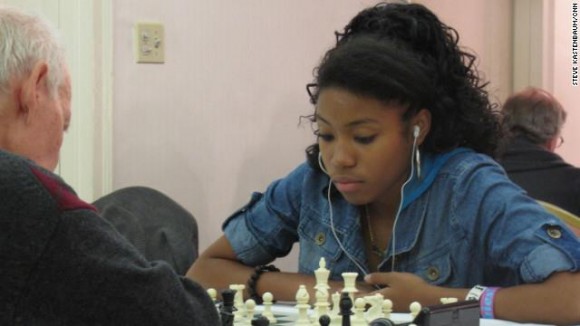 Brooklyn native Rochelle Ballantyne is poised on the edge of becoming the world’s first African-American female chess master. And she’s only seventeen. Seventeen.

The teenage chess genius is the only female player featured in the documentary Brooklyn Castle (in theaters now), about the chess program at Brooklyn’s I.S. 318 middle school, where 65 percent of the students live below the federal poverty level yet the chess team has more national championships than any other school in the whole country. Now a high school senior, Ballantyne is heading to the 2012 World Youth Chess Championships in Slovenia this month.

Asked in a Teen Vogue profile about competing in the mostly male-dominated arena of competitive chess, Ballantyne responded:

“… I like the idea of being the only girl! Winning is just that much more glorious because everyone expects me to lose. But many more girls are getting involved in chess, and I like that. The girls who play chess and go to national tournaments with me are my support system. The boys that I play with don’t understand.”

Ballantyne traces her competitive drive to her grandmother, who

“introduced to me the idea of being the first African-American female chess master. I didn’t think about it much because for me it seemed like an impossible feat, and I didn’t think it could happen… But then after she died, that really affected me, because she was the one person that always had confidence in me. She never pushed me, and she always respected me for who I was. I have to reach that goal for her.”

Best of luck to you in Slovenia, Rochelle. And best of luck to I.S. 318, which is facing budget cuts and might lose its chess program.

Actually, you know what? Screw luck. Rochelle doesn’t need it; she’s awesome anyway. And can some chess-loving millionaire go ahead and pony up some money for the chess team? There are probably some mini-Rochelles out there who need it.