Not everyone can "move forward," though. 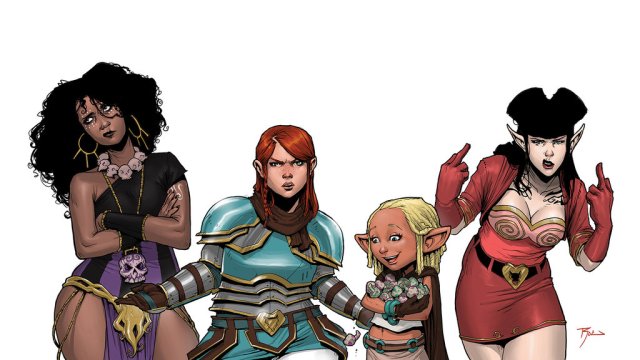 [Trigger warning for discussion of abuse and domestic violence.]

Former Rat Queens artist Roc Upchurch got arrested for domestic violence last year; he stopped illustrating Rat Queens shortly thereafter. Upchurch recently reached out to Comic Book Resources’ Casey Gilley to request an interview with her to discuss his life since; that interview went up today.

In the interview, Upchurch says that although the domestic violence charge will be “wiped off [his] record,” it was still a “mistake.” He elaborates, “I don’t want to downplay this — the court looked at it as a minor thing, but I see it as a major thing. It was horrible. It was the worst thing.” He discusses the counseling program he’s participated in for six months, and his current “need to focus on what I can do to the best of my abilities — being a father, being an artist, and being a good man.” Upchurch plans to return to his former line of work: “I want to get forward momentum in my career and in my life.”

I think it’s worth noting Upchurch does not technically apologize in this interview. He does not use the word “sorry,” nor “apologize/apology,” nor “regret”. He says that he made a “mistake,” which is almost there, but a lot of his language surrounding this “mistake” focuses on the idea of recovery and “moving forward.”

Many responses to the interview that I have seen on social media and in CBR’s forums have been positive; I haven’t exactly done a survey, though, and I have seen a handful of folks expressing discomfort. As for me, I do think it’s good to hear Upchurch describe his counseling and his firm belief that his former actions were a “mistake.” That said, I also think that the Rat Queens fandom — particularly the sector of it that wants Upchurch to return to illustration as soon as possible — needs to understand why some people may not be able to move on from this with as much ease.

Just as with our coverage of Straight Outta Compton, so too is this a case in which it’s important to boost the voices of the abuse survivors. Only a few weeks ago, Upchurch’s ex-wife updated her blog with a post about her former husband’s physical abuse. This recent posting seems to conflict a bit with Upchurch’s statements in this interview, about how he and his ex-wife are “work[ing] together to make things as good as possible for our children.”

Furthermore, his ex-wife’s blog still includes a photo of a 2012 Notice of Substantiation from Delaware Family Services; the document states that the DFS determined that Upchurch was “responsible for an incident of abuse regarding [his] child.” (This photo has circulated on Twitter a bit, but it’s not something that Upchurch mentions in any interview that I can find.) It’s clear that the recovery of Upchurch’s family, which his ex-wife has been documenting with updates every month or so, will be a long and difficult road for them.

I don’t have a happy conclusion, here. I don’t think stories like this can end with a neat wrap-up, which is the crux of it all. Upchurch has undeniable artistic talent, and like I said, I’m glad that he’s in counseling. But the stories told by his ex-wife haunt me, and I think it’s vastly important to remember them, as haunting as they are. Her blog isn’t as “positive” to share as Upchurch’s words; it would be much easier and simpler to share that CBR interview and speak only of forgiveness. But for some, that just may not be possible, and it’s important to remember those experiences as well.