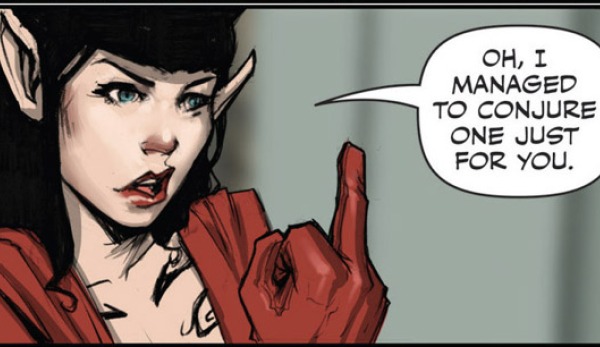 Rat Queens co-creator and artist Roc Upchurch has been arrested for domestic violence after allegedly beating his ex-wife.

Arrested in Henry County, Upchurch was charged with “Battery- Family Violence, First Offense Misdemeanor” on October 31st. After the incident, Upchurch’s ex-wife wrote a blog post detailing the night of the arrest.

Though her original post has been deleted, you can still read it via Google Cache – but be aware that it may be triggering. Along with photographs of her bruising, she has posted a screenshot of the police report, and an account of what allegedly happened. After, she writes:

My husband told me this is what I wanted, that I push him to this point, that I turn him into this person. Some part of me believes that to be true or at least I wonder is it true. Do I? Did I…turn him into this monster that he refers to himself as? If I do I must be a horrible person…but all I want to do is make this right, put my family back together, give my kids the family I never had and grow up in a two parent household.

Which is so tragic and textbook that it could very well have come out of a pamphlet on domestic abuse.

Bleeding Cool reached out to Upchurch, who confirmed to them the arrest. He also gave them a statement which we will not be reposting here; but to paraphrase, Upchurch’s statement justifies his attack on his ex-wife because he alleges she hit him first. It is, unfortunately, a quintessentially victim-blamey statement.

It’s always difficult when someone who creates content you love does things with which you just can’t align yourself. It’s especially difficult when you recognize that stopping your monetary support of said content also punishes the other, not-problematic people who work hard on the final product. You are still allowed to enjoy the content you enjoyed before; but it’s also important to recognize something like this has happened, so that you can make your own informed decision about how you feel about further supporting that particular creator’s work.

Though we undoubtedly don’t (and likely will never) know the full story here, it’s worth mentioning that often the bravest and most helpful thing you can do for a woman in situations of domestic abuse is to believe someone when they tell you their story. Please remember that you can reach the Domestic Abuse Hotline at any time at 1-800-799-7233.