The Future is Creepy: Posters That Respond When Kissed 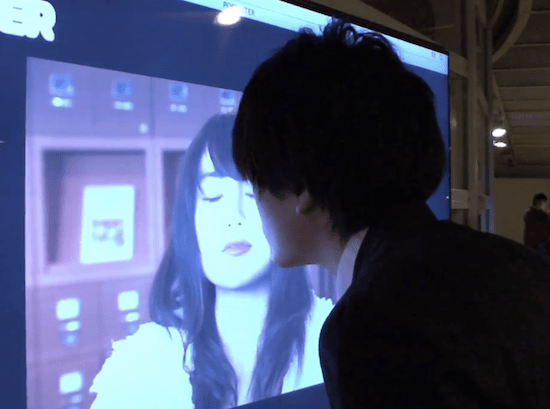 The mad researchers at Keio University have done it again. This time they’ve created a digital poster that responds when users kiss it. Yes. Those are words that I just wrote to accurately represent the situation. While that’s creepy enough on its own, it gets weirder.

The mind behind the system, Keidai Ogawa, explains that the technology behind it is remarkably straightforward. The “poster” is displayed on a screen and displays a variety of images depending on the distance from the user, which is measured using an overhead ultrasonic sensor. As the user leans in to plant one on the poster, the image changes from a default image, to one showing the moment of smooching, to a coy blush afterward.

Ogawa says that he came up with the idea after becoming frustrated that his pop idol posters were completely static.

There’s no good way to put this, but this idea is downright creepy. Ogawa says that he’s investigating commercial opportunities, and I can see why ardent fans of a particular individual might want such an interactive experience. However, I cannot imagine how these devices would not be a hotspot for communicable diseases if used as public advertisements. Especially if the person in the image was particularly popular.

Speaking of iPads, Ogawa says that they’re working on an iPad version which would use the front-facing camera or light sensor to detect an incoming smooch. Hopefully this version will go a step beyond the current iteration and be able to tell the difference between a face and a bird, or anything else that comes near the screen. If you’re going to be high tech creepy, at least go all out.

In addition to the working model, Ogawa talks briefly about the user tests that suggested ways to make the experience even more interactive. From DigInfo:

“The current system only produces visual changes, but we could also include the scent of shampoo from the person’s hair, or a lemon-flavored film on the lips, or a speaker that whispers “I love you.” People who’ve tried this system advised us to do those things, so we think there’s still plenty to be done. We’ve learned a lot from talking to users.”

Making the creepy even creepier, thanks to user testing. Also, isn’t there some kind of weird thing about people thinking first kisses taste like lemons? Way to amp up the ick with virginal fetishizing.