Here Is the Latest In Terrifying Robot Muscle Technology 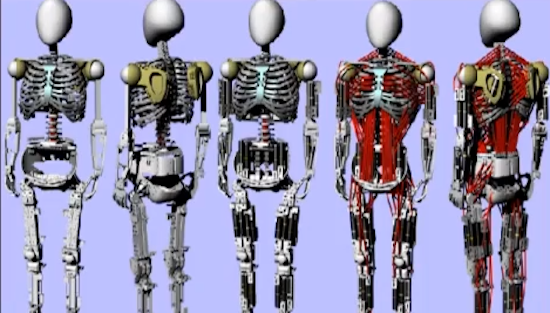 Humanoid robots are popping up more and more often these days, but researchers and engineers at the University of Tokyo have brought a new level of realism to their robotic creation Kenshiro — a set of 160 robotic muscles inspired by those of the human body. The pulley-style musculature helps Kenshiro resemble a human frame more closely, and researchers hope that closeness in form will eventually help them mimic the movement style of the human body as well.

Kenshiro’s muscles are made of strong cables pulled through several sets of pulleys. When activated by an motor driven actuator, they can cause tense or release, giving  the attached muscle leverage and torque or relaxing its grip or stance. The end result is a musculature that is already almost as effective as a human’s. Attached to a strong, lightweight aluminum frame, they give Kenshiro a range of motion that could one day fully mimic that of pitiful flesh and blood humans like us.

It just goes to show, everything is scarier when a robot is doing it, even squats. Also, when the robot doesn’t have a head. Even if Kenshiro is still pretty small — just over five feet tall and weighing in at 110 pounds, making it about the size of an average 12-year-old boy in Japan — that muscle system is pretty impressive. It’s one tiny, headless robot we wouldn’t want to arm wrestle with any time soon.