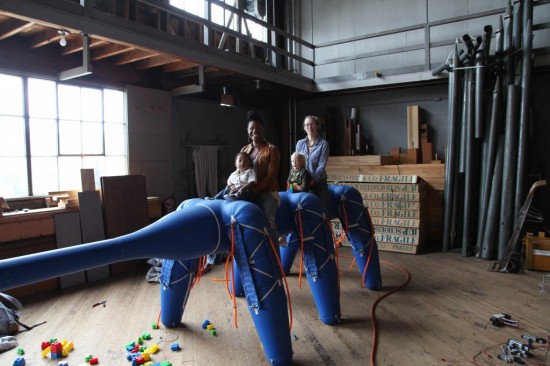 By and large, robots have relied on the rigidity and strength of metal and plastics to give them form and to interact with the world around them. The engineers at Otherlab are looking to change that with robots like Ant-Roach, a whimsical inflatable robot modeled after the noble ant-eater and the ever-survivable cockroach.

Though that pedigree is, perhaps, less than appealing, the Ant-Roach shows off the incredible things inflatable robots can accomplish.

Amazingly, the big blue Ant-Roach weighs only 70 pounds, but can support around 1,000 pounds of cargo. Showing off this impressive strength-to-weight ratio is part of why Otherlab decided to build Ant-Roach, beyond simply making a striking hexapod.

The robot also shows off Otherlab’s major selling point: That it is able to move its legs and elongated nose using only specially created inflatable “muscles.” These fabric actuators contract when inflated, letting Ant-Roach stumble along at a respectable amble. If you’re not impressed by its locomotion, keep in mind that it’s mostly a proof of concept and take a look at the video below, which features another project from Otherlab.

So, you’ve got an astounding actuated inflatable arm and a cute-but-functionally-limited walking robot. But between these two, the potential of inflatable robotics becomes a little clearer. Consider, for example, that NASA is currently preparing to send a massive rover to the surface of Mars which is so large, it will be lowered to the red planet from a hovering rocket sled. Ant-Roach, on the other hand, can be rolled up and dumped wherever, then inflated. Moreover, these inflatable designs are relatively easy to maintain, and inherently safer for human interaction than cold, unforgiving steel.

Though clearly in its infancy, inflatable designs like this have some pretty astounding capabilities that point to dynamic future applications. While it’s surely a long way off, more mature inflatable robots could drastically change the field of robotics. Or they might just say hello with their bright blue proboscises.