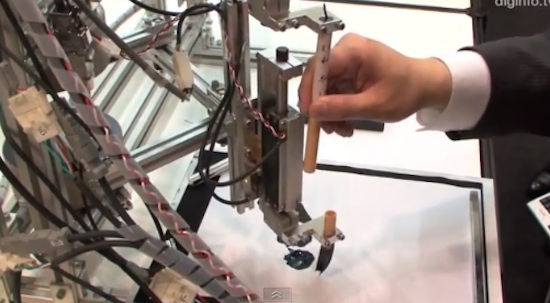 The Japanese are having a hard time getting younger generations to take up the ancient, traditional art of calligraphy, probably because of the lack of loud noises and shiny things involved in spending years of your life learning to make a brush stroke just so. So instead, they’re working to preserve the art form by teaching it to robots, because robots cannot get bored and have to do what you tell them. For now.

This new robotic arm, developed by engineers at Keio University, uses a segmented brush that captures not only the motion, but the force applied to the brush by a human calligrapher, recording and reproducing those factors to preserve the calligraphic style for future generations. Because, frankly, there’s every reason to believe that future generations will have better things to do with their lives than calligraphy, like marathon DoTA sessions, and teaching robots to preserve ancient traditions. Keep reading to see the arm in action after the jump.