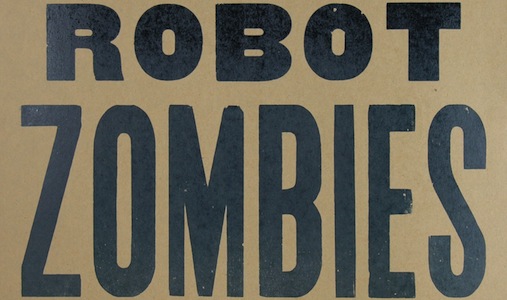 How exactly does one sell Steven Spielberg the film rights to a book the day before you sell the book to a publisher? And then publish the book in June and get Dreamworks and Fox interested in funding it by September? Is there a course I could take? A muse I could please? A demon to trade?

Or do I just have to write a book where GLADoS is a computer virus that takes over all of the world’s technology and nearly wipes out the human race.

Also, there are human corpses reanimated by machine parasites purely to commit psychological warfare on remaining humans, or, robot zombies.

Daniel H. Wilson‘s Robopocalypse follows the lives of a handful of survivors of the initial robot assault, from a hacker/phreaker to a man infatuated with his now evil Realdoll. The singularity begins sometime in the near future, as humanoid robots have begun to perform basic useful roles in society, when a lone researcher (and it is always a lone researcher) accidentally allows the artificial intelligence he was working on to escape it’s network and get out into the real world. Every time he has booted Archos up, it has decided within minutes that it loves life and in order to preserve it it must destroy all of humanity, and been shut down.

This is a familiar story to anyone who paid special attention to Portal 2, and I’m not saying that to highlight unoriginality, but rather to use it as a reason to be a bit more excited.

Wikipedia and TVTropes don’t have much yet on the plot of the young novel, so the reviews on the book’s Amazon page are really your best bet for getting a good idea of it.

As for the movie, it seems obvious that there will be small children in it with an uncanny knack for surviving even the most devastating and surprising robot attacks.

I kid because I love, Mr. Spielberg.