How Has Rob Granito Taken His Scam This Far? 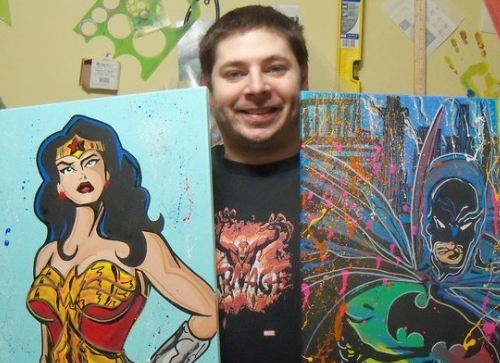 The man pictured above is named Rob Granito, and according to numerous people, he has been ripping off artists and collectors for years. He runs a table at conventions, selling what he calls “original” art when it has clearly and blatantly been ripped off from other artists. Not only that, but he also pads his résumé like nobody’s business. Bleeding Cool’s Rich Johnston has been digging deep into this, and what he’s found is pretty infuriating. And illegal. See for yourself after the jump.

It’s one thing to use a trademarked character for original art as an homage or tribute piece while giving credit to the original artist. But what Rob Granito is doing is way beyond that, and it seems that he rarely — if ever — gives credit. And it’s been going on for years. Basically, he’s been taking original work from other people, making minor changes to it, putting his name on it, then selling it at conventions and his own web site for hundreds of dollars. And if you need proof that he’s not just doing tributes, here are a couple of examples: 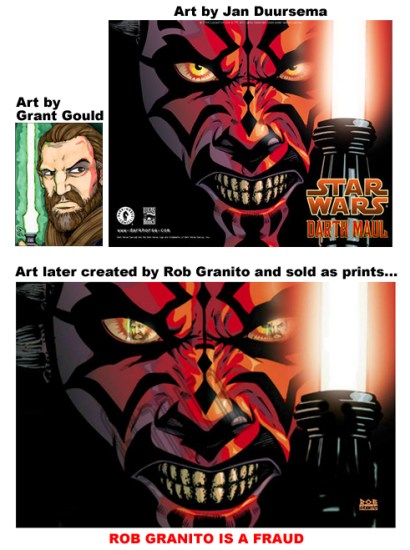 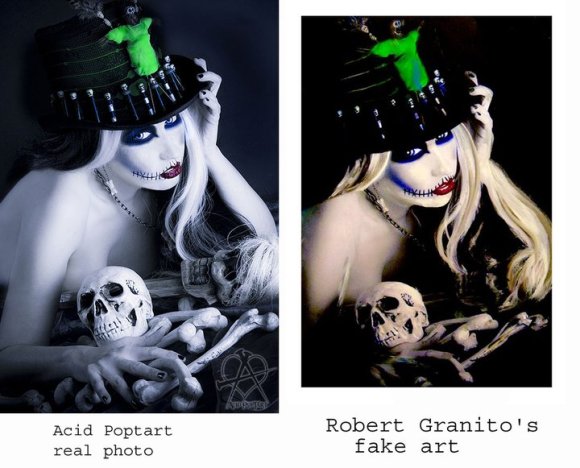 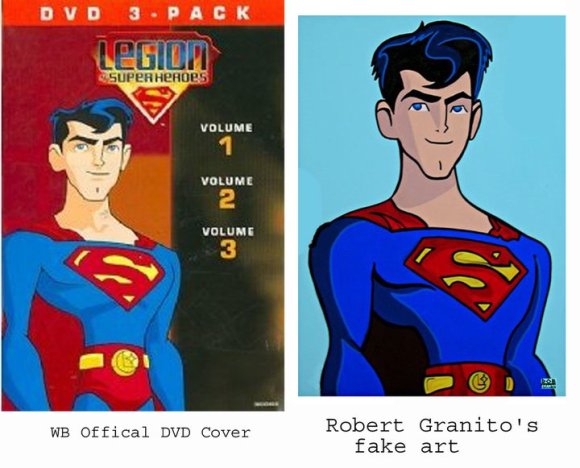 He’s even been confronted by one of the artists he ripped off, Ethan Van Sciver, who drew a Batman stamp that Granito claimed to have drawn.

“Explain yourself, Rob. What’s up with all of these swipes here?” He said, “Well, it depends on what pieces you’re looking at. He paged through these 3 huge folders on his table. “THIS isn’t a swipe.” No, but it wa…s horrible. “Yes, but THAT is.” I said, pointing to the John Byrne Plastic Man painting that was hanging up. “John Byrne drew that, but I wouldn’t know it from the way you’ve presented it. It simply says, ‘Rob Granito.'”

“Well, people know…” “No, they don’t, Rob. If you must swipe someone else’s work, you must be very clear. It must say, “AFTER JOHN BYRNE” or something. You’ve got to credit the original artist with the entirety of the drawing.”

Rob got panicky and went through his folder again, pointing out a big print of George Perez’s Superman cover with Thor’s hammer and Captain America’s shield. It said, on the bottom, in typex, “Inspired by George Perez.” He tapped it with his two fingers, “I do do that! Look!”

“Rob, that wasn’t ‘inspired’ by Perez. That was STOLEN from Perez. It’s entirely his drawing, which you’ve traced.”

He shrugged and said “I don’t know what to do.”

One of the biggest red flags is that Granito has claimed to have worked on Bill Watterson‘s Calvin and Hobbes. Even when anyone who’s anyone knows that Watterson and only Watterson has ever worked on Calvin and Hobbes. And yet there is Rob Granito, selling an image that is so obviously a Watterson original, flipped. But one of his biggest lies was his claim to have worked with the late (and beloved) Dwayne McDuffie, which he even perpetuated upon hearing of McDuffie’s death.

Johnston’s reporting on this matter is worth checking out, especially since he had the gumption to contact Granito himself and get some pretty shady responses. (From both Granito and a guy Granito didn’t want Johnston to believe was also him, even though it was pretty obvious.) He makes up imaginary gigs and imaginary coworkers, and then he makes actual money by ripping off actual people. It should also be stated that as blatant as this all looks, we have to refer to all possible copyright infringement as “alleged.” But I think our question is this: Why hasn’t anyone sued this guy yet?