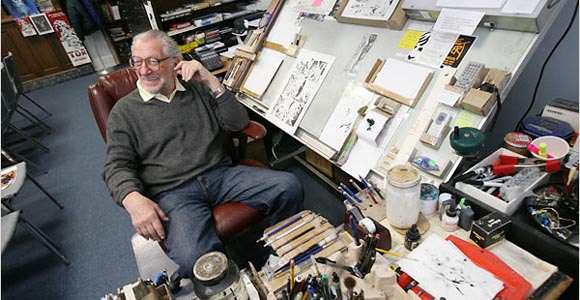 The art world took a huge hit yesterday when it learned one of its most famous and respected members had passed away. Comic book artist and founder of the Kubert School of Cartoon and Graphic Art, Joe Kubert, died yesterday at the age of 85.

Although he stands in a league all his own, Kubert ranks up there with Jack Kirby and Will Eisner, two other artists who made huge contributions to the comic book realm and will all go down in history as famous contributors to the medium. Kubert was born in Poland in 1926 but emigrated to Brooklyn, New York while he was still a baby. The Beat writes:

Kubert’s start in comics sounds like something out of the annals of the child welfare agency now: as a mere boy of 12 or so, he hung around the studios of the burgeoning comics industry of the late 30s—not exactly the most savory place for a kid, perhaps, but he loved to draw, and his family encouraged that interest. It was at MLJ Studios (the precursor to Archie) that Kubert recalled getting his his first job, helping ink a Bob Montana story while he was just a young teen.

The artist is well-known for his hand in creating Sgt. Rock, the World War II character, with Robert Kanigher but also Tor, the prehistoric man, and Ragman, one of the few Jewish superheroes in 1976. He’ll also be remembered by many as one of the best artists who ever worked on Tarzan and Hawkman. 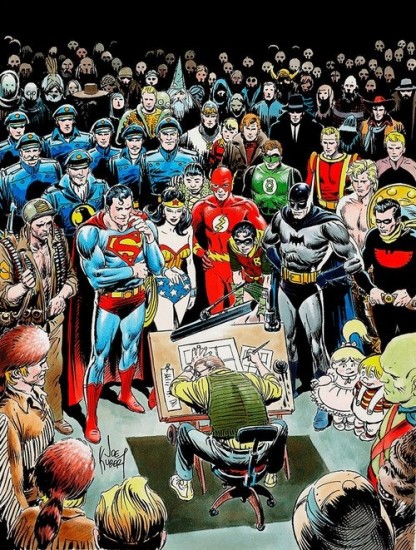 One of the other legacies Kubert left behind was The Kubert School which he and his wife Muriel founded in 1976 (they also created the first 3D comic together). New Jersey natives (as well as others) were very familiar with the Dover-based technical school which saw many future comic stars walk through its doors and will certainly continue to do so. Shane Davis, Scott Kolins, Rags Morales, Dan Parent, and Amanda Conner are just a small sampling.

Kubert leaves behind many friends and loved ones but also his two sons, Adam Kubert and Andy Kubert, who took very much after their father and made names for themselves in the industry he loved so much. Also remembering him today are his two other children Danny and Lisa, and 12 grandchildren, including Katie Kubert, an assistant editor at DC Comics.

He may have been out of monthly comic work for a while but he was far from retired. He and his son Adam worked on the Sgt. Rock tale in the Wednesday Comics series a few years ago but more recently, he was working with Andy on Before Watchmen: Nite Owl. DC was also putting together a 6-issue anthology titled Joe Kubert Presents for this fall.

Even though the Olympics were taking up most of the attention online last night, NJ.com reports “Joe Kubert” was trending worldwide, certainly a testament to his influence on the world. Kubert told the Star Ledger this past June, “I was, and still am, the luckiest person in the world.”