We’re Not Getting A RiffTrax For Twilight, But Starship Troopers Is A Pretty Good Consolation Prize

Can't wait to see what the erstwhile MST3K crew does with one of the corniest sci-fi movies of the 90s? Yeah, neither can we. 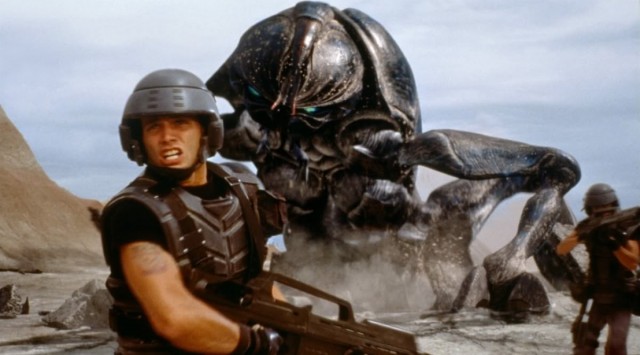 First, the bad news: the MST3K alums at RiffTrax couldn’t lock down the rights to make a RiffTrax version of Twilight. The good news, of course, is that you don’t need to watch Twilight now or ever again. The even better news, though, is that the team will bring their trademark heckling to the sci-fi classic Starship Troopers, and at a live event no less. The whole movie is a hanging curveball for anyone who wants to try and make fun of it. With the RiffTrax team in the Stadler and Waldorf seats, though, it promises to be a work of high art, a phrase here associated with the movie Starship Troopers for the first time ever.

Making the announcement on Kickstarter, Mike Nelson, former host/writer for MST3K and RiffTrax grand poobah, detailed just a few of the things that make Starship Troopers getting the RiffTrax treatment more or less the best news ever.

It’s basically a cheesy 50s sci-fi flick, the kind we know and “love”, but made in 1997 with a massive Hollywood budget! NEIL PATRICK HARRIS as a psychic who talks to giant bugs! DENISE RICHARDS as a brilliant starship pilot, before she was a brilliant nuclear scientist in that Bond movie! MICHAEL IRONSIDE, because it’s a war movie, so of course Michael Ironside! JAKE BUSEY, hanging out and making it weird! This movie’s got it all!

Like I said, this is not, by any definition or stretch of the imagination, a good film. It is an incredibly fun film. It is a film — and a book, for that matter — that holds a special place in my heart. But as far as genuine film quality goes, it is about exactly what you’d expect to put in front of the RiffTrax team, and I for one can’t wait to see them unload on it.