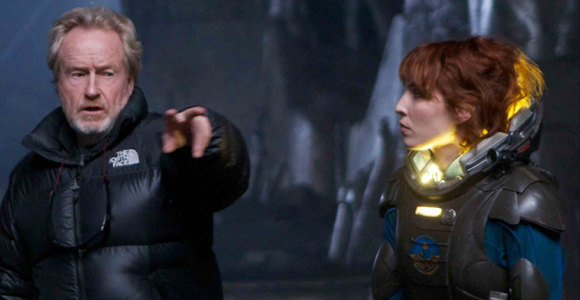 Speaking with Empire Magazine, director Ridley Scott dropped a few bombs concerning some of his most anticipated projects – the Prometheus and Blade Runner sequels.

“Prometheus 2 is written,” Scott plainly told Empire, adding he’s already got his next two films ready. Last we heard, Transcendence writer Jack Paglen had been hired for the gig and that Damon Lindelof would not be back to work on the project.

“There is also this very well written piece, one of the last great science-fiction books called The Forever War [the bureaucracy and space battle masterpiece by Joe Hadleman] – we’ve finally got a very good draft of that for Fox,” he said. “I thought I’d left science-fiction for too long, that I had better climb back in. Prometheus was a great experience for me. Chasing number two, we can start evolving the grand idea…”

To be honest, I was very, very excited for Prometheus and just a little bit disappointed in how it turned out. That being said, I think it left the door wide open for an interesting sequel so I’m hopeful.

On the Blade Runner 2 front, Scott had this to say: “Yeah, we’re working on [Blade Runner 2] right now – that will happen sooner or later.”

Original Blade Runner screenwriter, Hampton Fancher was working on the script for that one with Green Lantern’s Michael Green hired for rewrites. Though this “sooner or later” talk doesn’t give me hope. He’s probably reluctant to give any details at this point, but if you’re going to touch your masterpiece I’d at least like to hear you be excited about it.