No, Rick Remender Did Not Write Falcon Having Sex With A 14-Year-Old In Captain America

Let's take a look, shall we? 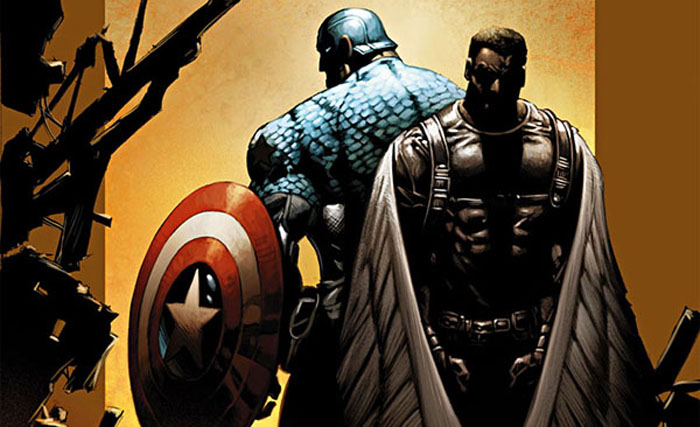 Captain America #22, by writer Rick Remender and artist Carlos Pacheco, caused an uproar last week. Why? Many were under the assumption a sex scene between Sam Wilson (aka The Falcon) and Jet Zola was actually a statutory rape scene. Soon, the hashtag #FireRickRemender surfaced on Twitter and many angry posts were written. There’s just one thing to clear up – in the comics, Jet is at least 23 years old. So why the confusion?

We first saw this story explained on The Daily Dot, who documented many of the reactions from fans on Twitter and Tumblr but also posted an image from the comic in question. Sam and Jet are seen waking up after presumably having sex together the night before. Sam is concerned/worried because “workplace romance” is frowned upon. On the first page of their exchange, Jet mentions drinking a certain wine on her 23rd birthday (at some point in the past, so she could be any age older than 23 at this point) in a short flashback to the events the night before. With that clearly spelled out, where did such widespread confusion come in (keeping in mind the internet has been known to divorce things from their original context)?

Tumblr user Khat broke it down in a great in depth post which also includes a few images from not just Captain America #22 but also issues leading up to it. 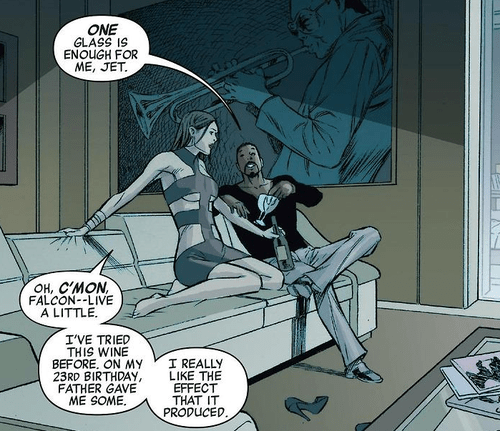 The story goes, Jet, along with her younger brother Ian and Captain America, have been living in Dimension Z. In that particular dimension, time moves faster than it does in the dimension Marvel characters normally live in. Khat seems to believe confusion comes in mostly if someone confused Jet with Ian, perhaps thanks to the artwork (a later Ian looks similar to how Jet was originally introduced) or just not following the series as a whole. “The two siblings, although they share the traits of being genetically modified to being perfect by their father, Jet and Ian are from different decades (or at the opposite ends of their shared decade),” Khat writes. “Ian, who’s merely still a child at around twelve years old is designed to look like a kid because he still is a kid. While you have Jet who looks like an adult because she’s no longer a child and hasn’t been for quite some time.”

Captain America himself aged while he was in the dimension even though only a short time has passed outside it. They actually did carbon dating on his uniform to let him know the exact time he was in Dimension Z – 12 years.

From the evidence Khat presented (which you should read through in full if you want all the details), and the full scene she posted here, it’s pretty clear this was two adults involved with each other. Though it’s important to mention while it was stated the character is now 24, Jet has been sexualized (like most female comic book characters) in the past when her age wasn’t as pinned down. For her power set, her skin can read the future but only if it’s bare, and unlike X-Men’s Rogue who covers up her skin until she needs to use her powers (mostly because she’s afraid of hurting people), Jet’s costumes have had her revealing much of that skin. Putting aside readers issues with Jet, many also have a problem with the writer putting Sam in a situation they feel is out of character for him.

Marvel editor Tom Brevoort had this to say when asked about the situation on his tumblr account:

First off, rape and the possibility of rape is an omnipresent danger for at least half of the population, and one that many people are extremely sensitive about. It’s a serious issue, and should never be taken lightly. But secondly, there are a few readers who are upset with Rick for slights real or imagined who have no compunction about misrepresenting the work he’s done in order to stir up anger among people, in the hopes of getting him fired…

I think readers are allowed to feel however they want to about a particular title and a particular creator, and to follow or not follow that title/creator as they see fit—and even to rail against it or campaign against them if they so desire. But this sort of behavior crosses a line for me, it is a disgusting use of the very real and very emotional concerns of a great deal of the population to further an agenda that has nothing to do with the issue in question—and those doing the campaigning know it. Just leaves a bad taste around our entire community.

This isn’t the first time Remender has stirred controversy over his work at Marvel and while not specifically mentioning #FireRickRemender after this current flare up, we believe this tweet is referencing what happened:

Thank you, all. In a moment of uncharacteristic sincerity, I was almost brought to tears by everyone’s support. Almost.