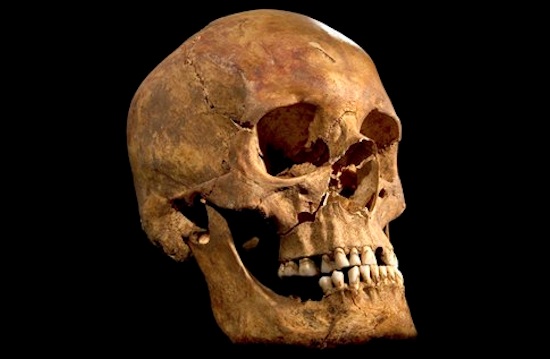 The long-lost body of one of England’s most famously reviled royals has been discovered in a rather ignominious final resting place. Researchers from the University of Leicester are reporting today the DNA evidence has confirmed that a body found beneath a parking lot late last year is indeed that of Richard III. Some historians are hoping the find will provide a chance for people to look at the 15th-century monarch in a new light, independent of the ‘hunchback made of pure evil’ characterization popularized by Shakespeare’s well known play.

Researchers found the skeleton in Leicester last September, which began speculation that the remains might be those of the long-lost kind who lost his life in the Battle of Bosworth Field in 1485. Those suspicions have now been confirmed by radiocarbon dating the skeleton to get an accurate view of its age, and by DNA testing known relatives of the long-dead king, so thanks healthy British genealogy system.

The body showed signs of belonging to someone killed in battle, bearing fractures that could have come from a bladed weapon on the skull, as well an arrowhead still lodged in its spine. The spine also demonstrated curvature consistent with scoliosis, a bending of the spine that the bard took some liberties with, portraying Richard III as a hunchbacked monster, though many historians feel he probably full deserved neither of those slights. Members of the Richard III Society, a historical group dedicated to rehabilitating the image of an ancient and hated English king — because, hey, everybody has to have a hobby, right? — are hoping the find will ignite a new sense of scholarship and research over the ruler with perhaps the worst reputation of all time.

(via PhysOrg, image courtesy of University of Leicester)