Review: Your Name Will Make You Revisit Every Memory In Search Of the Soul Mate You’ve Forgotten 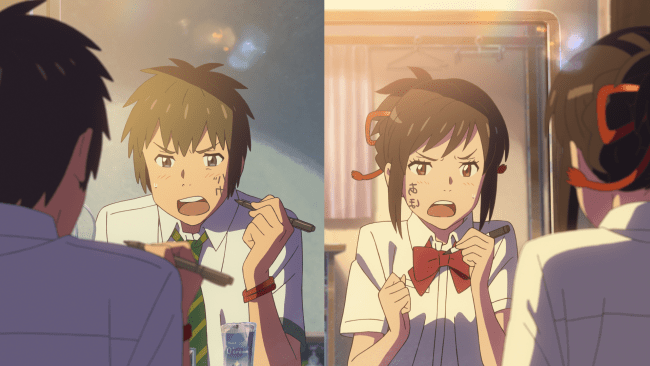 Have you ever been abnormally interested in a topic in a way you couldn’t explain? Have you ever felt there was a hole in you that nothing seemed to fill? Writer/director Makoto Shinkai’s gorgeous film, Your Name, which was released in U.S. theaters this weekend, plays with these questions and many, many more in ways that will make you think, make you cry, and make you revisit your own memories in a new way.

Here’s the official synopsis of Your Name:

The day the stars fell, two lives changed forever. High schoolers Mitsuha and Taki are complete strangers living separate lives. But one night, they suddenly switch places. Mitsuha wakes up in Taki’s body, and he in hers. This bizarre occurrence continues to happen randomly, and the two must adjust their lives around each other. Yet, somehow, it works. They build a connection and communicate by leaving notes, messages, and more importantly, an imprint.

When a dazzling comet lights up the night’s sky, it dawns on them. They want something more from this connection—a chance to meet, an opportunity to truly know each other. Tugging at the string of fate, they try to find a way to each other. But distance isn’t the only thing keeping them apart. Is their bond strong enough to face the cruel irony of time? Or is their meeting nothing more than a wish upon the stars? 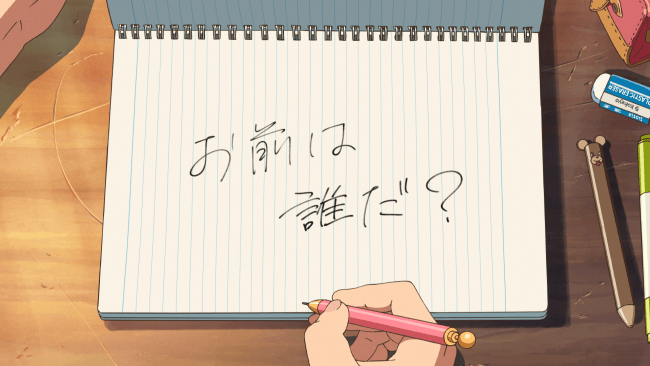 The film plunges you right into the action in a way that is unsettling and a bit confusing, but ultimately pays off as you realize, along with the characters, exactly what’s happening: a male and a female teenager are, at seemingly random times, switching bodies and lives Freaky Friday-style. However, far from being a gimmick, this plot point is used to explore issues of gender and culture in a unique way.

Mitsuha, as Taki, gets to teach him how to explore his feminine side in order to develop better relationships while Taki, as Mitsuha, helps her to learn how to stand up against her demanding, yet aloof father in a way that girls are not often taught to do. Each of the characters is so well-defined on their own that you can see them shining through even as they try to hide underneath the other person’s skin. Mitsuha wants nothing more than to get away from her small town and move to Tokyo, whereas Taki longs for (and is afraid to pursue) a life that is all about simple and beautiful things, despite his big-city upbringing.

This beautiful characterization is entirely due to Shinkai’s beautiful script, which not only delivers wonderful characters (Mitsuha’s little sister is particularly charming, as are Mitsuha’s school friends Sayaka and “Teshie,”) but also both magical realism and sci-fi elements that are blended in a gorgeous way. 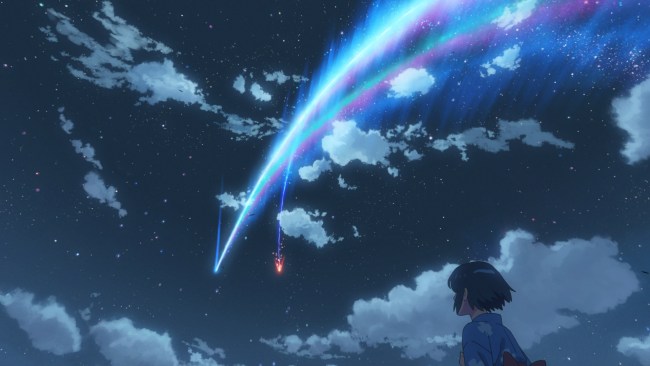 What I love most about the film, though, is that although the film deals primarily with young characters, there’s nothing childish about this film. These aren’t cutsey, superficial Hollywood teens, or even your frothier anime teens. These are thoughtful, nuanced teenagers who feel real. Yes, they have crushes and are obsessed with their phones, but they also have a huge amount of respect for their culture, care for their elders, and have concerns beyond their social lives.

The film is a bit slow in places, and once it gets more into sci-fi territory, there are certain plot points that are more vague than they need to be. However, Your Name is a creative and breathtaking experience regardless, and will hit you right in the feels. If you don’t spend several hours afterwards contemplating the many possible ways in which your life may have been impacted by the life of someone you don’t even know living miles away from you, I don’t know what to tell you.

Your Name is already Japan’s #1 film of 2016 with a solid 97% certified fresh on Rotten Tomatoes, as well as the highest-grossing anime film of all time, surpassing legendary works of art from Studio Ghibli founder Hayao Miyazaki including Spirited Away, Princess Mononoke, Howl’s Moving Castle and Ponyo.

Now, it’s playing in the United States for the very first time in both Japanese with English subtitles and an English-language Dub, featuring an all-new English-language soundtrack created by the award-winning Japanese band RADWIMPS, the masterminds behind the original Japanese film soundtrack and score.

If you’re looking for a film that delivers both high-concept genre storytelling and deep emotional resonance, Your Name is for you.