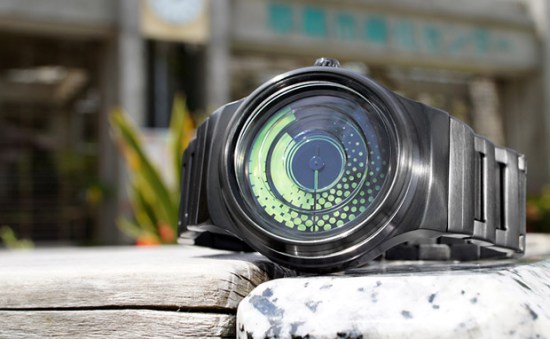 Being on the Internet for a living, one comes across some really neat products from around the world, from a bubble wrap calender to a USB adapter that allows one to mix and match parts from various video game controllers. One may also come across Tokyoflash, a company that specializes in some modern, sleek, and pretty weird watches. I’ve never been one to wear a watch, as my parents, who bought me various nice watches over the course of my life only to find them in a drawer years later, will sourly lament. However, upon seeing the Tokyoflash watches, I always thought if I’d ever give a watch a serious go, it’d be one of theirs. Along with our first Tokyoflash giveaway, we here at Geekosystem received some review units, so luckily for me, I got to give a Tokyoflash watch, the Kisai Uzumaki, a serious go. Here’s what I think.

First off, I feel I should actually talk about wearing a watch for an extended length of time for the first time: It’s pretty weird. I became hyper aware of what my wrist was touching at all times, considering I was afraid of scratching the watch, and because I could feel the metal on my wrist whenever I rested my wrist on just about anything. It was also pretty weird for me to look at my wrist for the time instead of pull my phone out of my pocket; something that’s probably normal for most of you. I’m also hairy (re: manly), and the watchband tugged at my wrist hair pretty frequently for the first few days of wearing it, which is pretty much unavoidable for me whenever I wear anything on my wrists anyway. We got three watches sent to us from Tokyoflash, and out of those I chose the Kisai Uzumaki, a sleek analog watch with a green and black face, and a black metal band.

A close-up with a less fancy camera: 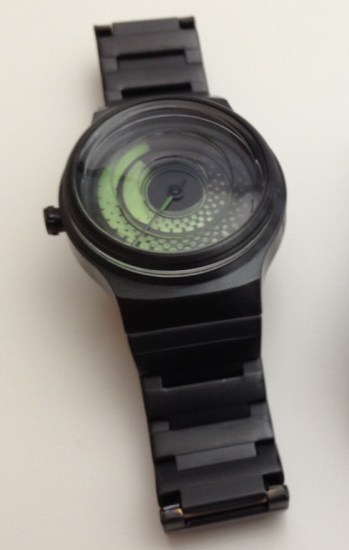 The face of the watch is comprised of two green and black dials with a fading dotted, alternating color pattern. At a glance, like most Tokyoflash watches, the time might be difficult to decipher, though the Uzumaki’s secret is actually pretty simple. Where the two colors meet — the black and the green — a line border is formed, and this line border represents the watch’s hands. The outer dial represents the hour, while the inner dial represents the minutes. A two-tone green and black second hand roams the watch like a standard second hand would on any analog watch. The face is covered with a clear, raised bit of plastic, raised at its height on the outer edge, and lowering toward the middle. This clear plastic cap adds a bit of protection to the face, as it feels quite thick, but other than that, it’s simply there for style.

The watch is made of stainless steel, and it gives the band and overall piece a bit of heft, which I usually prefer for most of my products, from my video game controllers to pieces of jewelry. The watch comes in mix-and-match versions of a silver or black band, and a blue and black or green and black face. Both watches illuminate with a soft glow with the press of a button that also doubles as the watch’s crown when pulled out a bit. The glow is almost unnoticeable in a well-lit environment, but in the dark it shines through perfectly.

That’s really all there is to this guy: It’s a stainless steel analog watch with a cool, artistically obfuscated face. I noticed it got a handful of looks while I was on the train, and a few people even commented on it. Good conversation starter, if someone happens to be checking out your wrist. 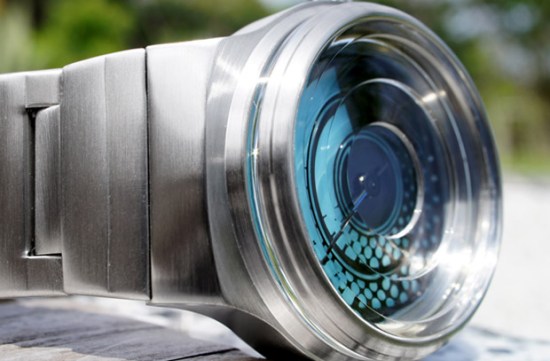 I actually quite like this watch, and at $129, it’s not too expensive (for stylish watches, that is). It gets the job done, and it looks pretty cool in the process. With the various colors of the face and band available to mix and match, there’s most likely an option that matches with your wardrobe.