This Girl is Different: A Review of Hanna 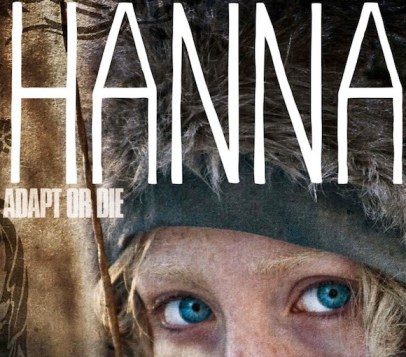 A super-soldiered little girl, raised in isolation, and trained to kill, is hardly a new trope. However, given the casting, the director, and the interesting font choices made by the PR team, I was game to see whether Hanna could pull some new tricks out of the clandestine conspiracy bag.

Hanna is a true crossbreed of Jason Bourne and the Brothers Grimm. Like all fairy tales, the film begins with a little cabin in the woods, with a father and daughter. As we immediately come to realize, however, this is no idyllic existence. The daughter, Hanna (Saoirse Ronan) hunts an enormous buck with a bow, arrow, and gun, then drags it back to their woodland hut after losing a surprise sparring match with her father. She is read and tested on litanies of facts, occupied with hard exercise, and told to always be ready to fight, to adapt, any time, day or night. Director Joe Wright goes about the exposition of this intimate world with refreshing obscurity. There are always hints at a larger picture, but rarely anything explicitly said. Soon enough, we see that Hanna is growing up, and is eager to undertake the assignment she’s been trained for since birth; to infiltrate the CIA and kill Marissa Wigler, her father’s former handler. With a flip of a locator switch, the movie takes off, a fierce series of stops and starts as hero and villain, special child and wicked witch, face off around Africa and Europe.

It’s not so much that Hanna is a different story as it is the same story, told differently. Beautifully shot on location in Helsinki, Berlin, and around the world, Hanna has an ambiguous, pan-European ambiance that underscores the placelessness of its central figure. Saoirse Ronan, playing the clever, deadly Hanna, pulls off a delicate balancing act. Even as Hanna’s eyes widen in wonderment, or she breaks into girlish giggles, we never forget the calculating mind underneath. Ronan does not oversell either of these sides of Hanna, and she comes across as a believable young teen, albeit one with extraordinary gifts. Director Joe Wright further proves the old adage about casting correctly by picking reliable standby Eric Bana to play former superspy Erik Heller, father and trainer Hanna.

The real treat is Cate Blanchett as the sinister, teeth-bearing CIA handler Marissa Wigler. Blanchett snarls at her minions, at her phone, and at herself, her heavy beige foundation crinkling as she turns sugary-sweet after a show of brutality. Her heel-turns, cold stares, and squeaking leather gloves give her a heightened sense of villainy, perhaps appropriate for the surreal patina laid over the whole affair like a fine frosting glaze.

Much of Hanna is handled with a delicate, dreamlike sensibility, interspersed with startling moments of violence. There are long shots of the titular character wandering across barren landscapes, the sunlight catching in her tangled blond hair. Blue lights bring out Ronan’s luminous complexion, seemingly devoid of warmth even when in daytime Morocco. Suddenly, the bad guys – in the form of three nearly-satirical German henchmen – close in, and our heroine is all brutal jabs to the sternum, accompanied by a grinding Chemical Brothers soundtrack. Thankfully, Wright knows how to let the viewer experience a character’s adrenal disorientation, but also how to keep a fight scene reading clearly. Each hit lands with a satisfying crunch, the bullets, – and not a few arrows – hitting their marks on screen and off.

A lack of warmth is perhaps unavoidable in a universe where the very girl we’re rooting for is genetically engineered to feel less pity than normal humans. Difficult as it may have been to work in, a touch more indulgence towards the story’s emotional moments might have been the clincher for audience sympathy. How can you feel for a character who, by definition, feels little? This cold cast is most noticeable in the third act’s tense climax, when Hanna faces down her father to demand the truth just moments before she sees him for the last time. What is she feeling? If we’re following her side, her reactions should cue our own. When she has nearly none, we, as an audience, lose our tether to the story, even as the final blood is spilt. In a terse thriller like Hanna, the director needs to grab us and hang on. Hanna grabs all right, and maybe kicks a few times, but, for this viewer, the hanging on was all my own.