When I initially heard about Sex Criminals I was leery. I understood the basic premise to be two young people who can stop time when they orgasm, and use this power to do crime. Written by Matt Fraction (of Hawkguy fame), the premise seemed intriguing; written by just about any other guy and I’d’ve been certain it’d just be weird softcore shlock. That said, I was still wary as I approached the title—it’s so easy to take any premise dealing with sex and women and go someplace incredibly terrible, largely because that’s the majority of examples we see on a day to day basis. I think it’s safe to say that by and large we don’t have healthy associations with women and sex in this society, so any book where that’s one of the main conceits is going to get a pretty critical side-eye from me.

Which is why you gotta believe me when I tell you that Sex Criminals is amazing.

Matt Fraction seems to have a knack for taking things we may have an overly romanticized view of and absolutely normalizing it while still keeping it in its fantastical setting. Which is to say that he makes characters that are believable and real without making them dark and cynical, something I would love to see  from every writer as we all grow out of our stubbly-chinned angsty nineties heroes. But the real beauty of this comic is that while this first issue begins in situ, the entire issue is devoted to the backstory of our protagonist, Suzanne.

As origin stories go, this one manages to be both fairly mundane and deeply fascinating. Mundane because Suzanne doesn’t do anything particularly spectacular with her power in this issue—she discovers it at the same time we all tend to discover our own sexuality, and in a way that is just intimately familiar. 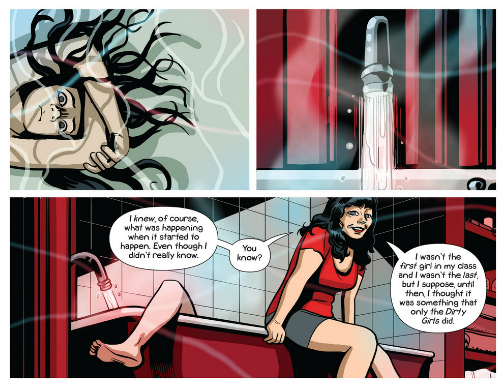 This first issue is not just about exploring how Suzanne came (pun intended a little) to have this power, but also about how many of us (referring largely to us ladies, in this instance) find out about sex and sexuality, and the complicated relationships we have with sex and our own bodies. From Suzanne’s own self-discovery, to trying to learn about it through the public school system (ugh), from trying to get the “dirty girls” at school to explain things to her, to somehow inventing entirely new rumors about sex and how it works while at the same time evoking every ridiculous thing I ever believed or had heard about sex when I was a kid, to losing her virginity and how that really felt versus her expectations of what would happen the whole book just struck such an oh my god I remember going through all of this chord with me that I was stunned by the end of it at how much Suzanne was also me.

Well, except for the stopping time part. And probably the crime part, but I guess I’ll have to wait until the next issue to see how that plays out, since the comic both begins and ends in situ, leaving us to wonder how Suzanne (and her orgasm-time-stopping-partner-in-crime Jonathan) actually use these powers together.

As much I would like to go through a page-by-page analysis of this book, because there are some moments that are incredibly deep and moments that are deeply funny, and the art in this book is absolutely at least as multi-layered and interesting as the writing, I think it’s better to tell you to go get it. Buy it. Read it. Love it.

Unless you’ve already done so, then go on and let us know in the comments: what did you think?