Review: Jane Got a Gun Is Not the Feminist Western It Wants to Be 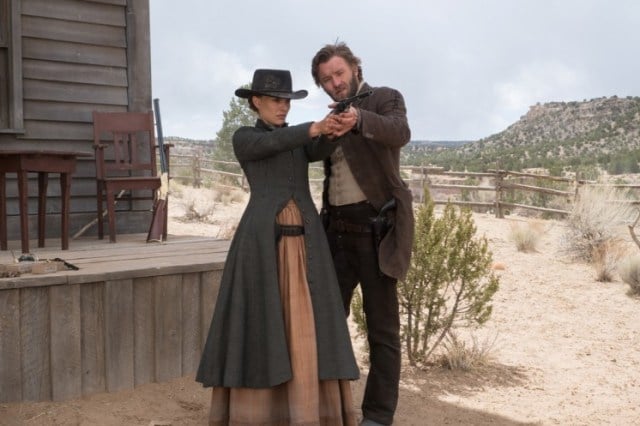 The most that people have probably heard about Jane Got a Gun is likely in stories of the bumps along the road this western endured to get made. It lost its original director (Ratcatcher and We Need To Talk About Kevin’s Lynne Ramsey) and went through a mess of casting changes (Michael Fassbender, Bradley Cooper, and Jude Law were all previously attached). It also was one of the titles involved in the tangled mess that became Relativity Media’s bankruptcy filing, which was one of several reasons this movie was a year and a half delayed in its release. Once thought to be a prestige picture (and follow-up for Natalie Portman’s Black Swan), the movie was released in January with little fanfare and had a bad opening weekend (under one million dollars bad). That’s a shame, because this isn’t a terrible movie; it certainly isn’t the train wreck bomb of a release I’ve heard it described as. It just isn’t anything great or especially engaging worth recommending.

Concluding the year of the western revival that started last summer, Jane Got a Gun is probably the most traditional of the modern takes on the genre. It isn’t as surreal and funny as Slow West or tragic and dramatic as The Keeping Room, and it certainly isn’t as controversial and divisive as The Hateful Eight or Bone Tomahawk. The premise is one for a movie that could have been made way back in the ’50s or ’60s … with one exception, which I’ll mention later. A wanted man (The Americans’ Noah Emmerich, who also happens to be the highlight of the film) with a family returns to his wife, Jane (Natalie Portman), and child, shot up. The men who want him dead are returning to finish the job, led by Ewan McGregor’s mustached villain (and he is pretty entertaining as the baddie). To protect the family, Jane finds a man she has history with, Dan Frost (Joel Edgerton), to hire as a gun fighter. Plot-wise, it’s pretty basic. However, there are also several flashbacks to explain the Dan-Jane relationship and how she ended up with Emmerich’s Bill Hammond.

The major issue the film has, besides lacking a strong, distinct directorial approach (this isn’t a visionary western by any means), is the perspective and point-of-view the film takes. Jane is the title character, who has suffered the most tragedy and seems to have grown the most in the west. Bill Hammond is the most interesting character because of the question of why he is wanted and why Jane is with him, but more often than not, the film seems most interested in exploring Dan Frost’s character, leaving Jane and Hammond as two-dimensional characters, always just on the verge of being more.

Even a reveal late in the movie about Jane seems to be told by her to Dan to provoke his reaction, his pain … not Jane’s. Portman is good in the scene for sure, but it happens too late and is too short a scene to focus so much on Dan Frost without it suggesting the filmmakers and screenwriters are still more interested in how men deal with the violation of “their women.” Acknowledging the shared grief of violent crimes and putting the spotlight on one is very different and troubling, and the movie simply doesn’t have the time needed to discuss such heavy topics in a respectful way that doesn’t sensationalize the issue.

Oddly, the dialogue (the movie was written by Brian Duffield, Anthony Tambakis, and Joel Edgerton) could have handled the inclusion of that part of the story if they had allowed more time to dig in and raised the issue earlier in the movie, and they could’ve done that had they not weighed the whole thing down with the melodrama of a love triangle. The lovelorn talk of Edgerton and Portman is so cheesy that people were laughing in the theater I was in. Also, we get so little information about Hammond that Dan Frost’s behavior towards him makes it near impossible to like him or want to see him with Jane, and the placement of this flirting always seems to be at inopportune times. They’re planning how to defend themselves from an assault on their house, having already ridden to and from the closest town after Hammond’s return (time is of the essence people!), and they stop work to talk about their feelings? That should probably happen WHILE working on the plan!

Logic and dialogue aside, the movie just never really gets going. With the exception of two very entertaining performances, and a few moments for Portman (who deserves better), the actors seem to be trying to act through a lot of muck. Edgerton is a good actor, but he isn’t the magnetic, old-fashioned anti-hero here we’ve seen him succeed at in other movies (including the director’s previous film, Warriors). It takes a lot of patience to ultimately get to a good—not great—action sequence towards the end, but the movie, photographed by Mandy Walker (a true talent from Australia) looks pretty great, and at 98 minutes, it moves along at a respectable pace. It is entertaining enough that I didn’t walk away angry for having spent my time, wanting those 98 minutes back, but I just don’t think it was necessarily worth the time spent watching, either.

The most disappointing thing about Jane Got a Gun really seems to be the sense that it sold itself as a feminist western and clearly didn’t deliver on the promise. Portman has moments of heroism but often plays second fiddle to Edgerton. Yet, the movie is bookended with images of Portman as the gunslinger she wants to hire. It clearly liked the image of a woman fighting to protect the home, but the majority of the movie doesn’t reflect that as much as it does redo the story of a man coming back to save the woman he once loved, and we don’t need a new western to tell that old tale.

(image via The Weinstein Company)