Review: Ex Machina is a Really, Really Weird and Wild Look at Machines 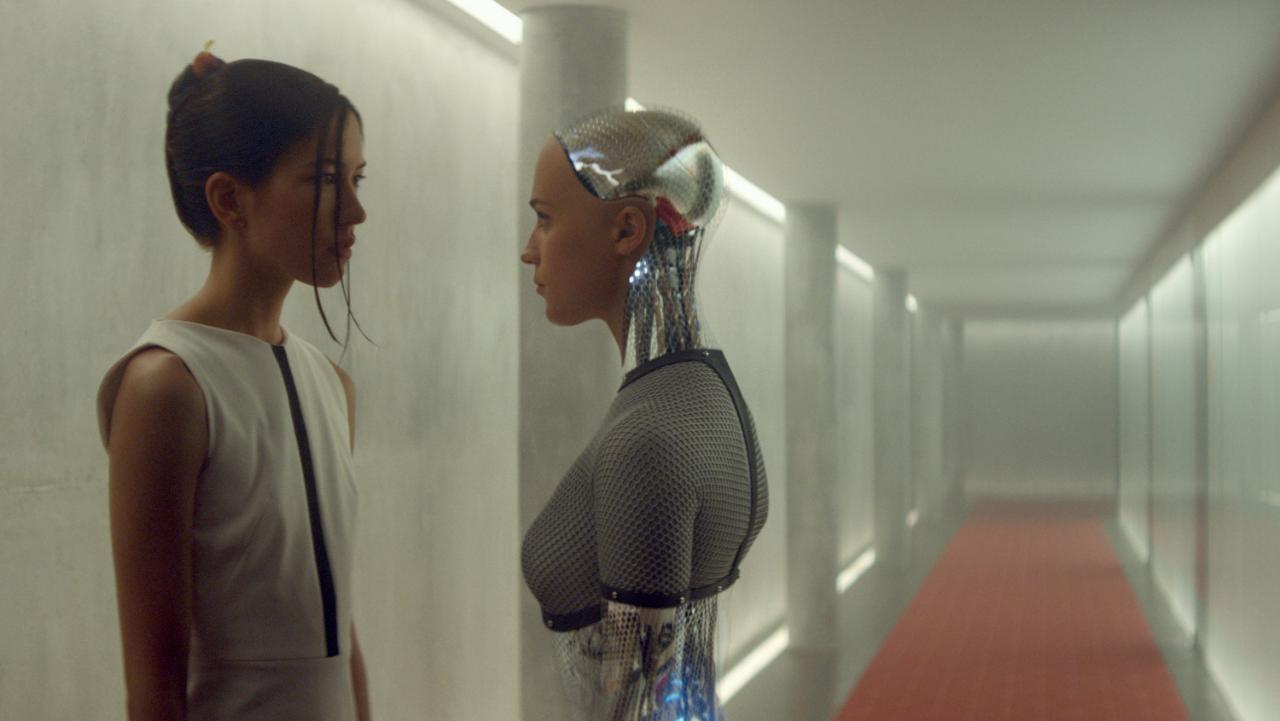 Just because you can do something, should you? For Oscar Isaac’s genius and all-around superior specimen (according to himself) Nathan Bateman, the answer is always going to be yes. After all, science is about advancement, and that requires making big leaps forward. Nathan has already become a multi-millionaire – and a complete recluse who lives on an island Isla Nublar (including having to get on and off by helicopter). And while Nathan isn’t creating dinosaurs, he’s making something just as (if not more) revolutionary: Ava, an AI with consciousness.

Nathan’s brought programmer Caleb Smith (Domhnall Gleeson) to his island home to test Ava, giving her what he claims is a Turing Test, although even Caleb realizes what he’s doing isn’t really a true Turing Test. Caleb can see and interact with Ava, and knows just from looking at her that she clearly is a machine – her insides glow and he can see the parts that give her human shape – but if he could only hear her lovely, very human voice, Ava would pass with flying colors. But don’t think weird Nathan doesn’t have a few plans up his sleeves for Caleb and Ava.

For one thing, Nathan’s only other companion in his home is a beautiful Japanese woman (Sonoya Mizuno, who is just great in her performance) who exists to serve him food, look beautiful, and not speak. Nathan yells at her for not understanding him, although he makes no effort to teach her English, relishing his apparent domination over her. She can’t speak English or understand what he says, but she will be a sexual creature for him, even dancing with him, and this relationship is one of the most unsettling to watch. It even signals to hero-worshipping Caleb that there’s a lot more wrong with Nathan than he initially thought. 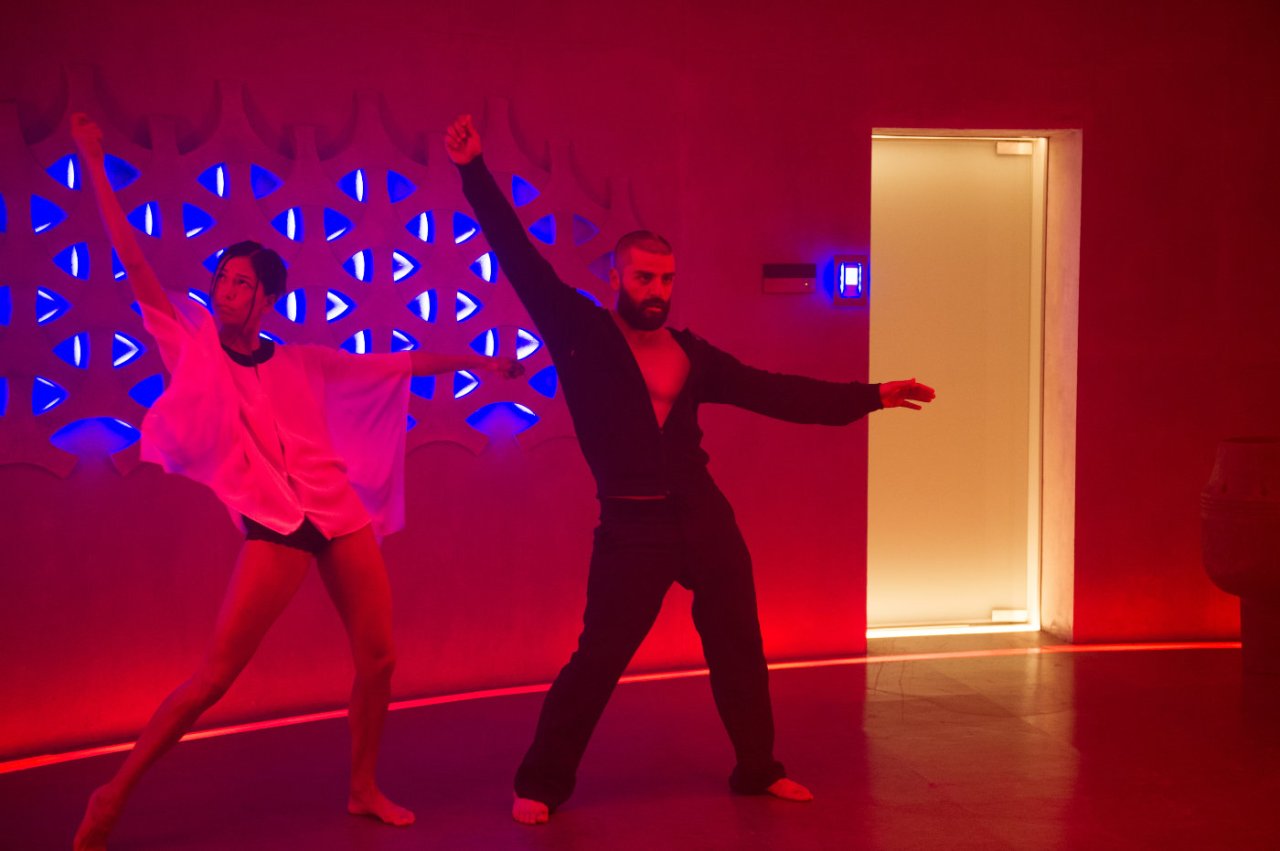 Alex Garland is a writer of whom I’ve been a fan for years; his work with Danny Boyle s a great example of writer/director collaboration, not just with the hit 28 Days Later, but also the brilliantly underrated Sunshine. In that film, the machine was friendly, a helpful servant to the young crew, a polar opposite to Hal in 2001. Ava takes elements from both those films, along with Her, Under the Skin, and Terminator, but the movie never feels derivative, and relishes the opportunity to talk about the implications and science behind what we’re witnessing. Some of my favorite scenes in the movie (although I liked most of this movie) are the ones in which Caleb and Nathan talk about what they’re doing; when Nathan shows how he created an AI’s brain, or why he choose to give an AI a gender and sexuality.

The movie also looks great. Garland might be making his directorial debut with this film, but he’s obviously been studying with the directors with whom he’s worked as we a writer. He isn’t aping anyone, but there is also a self-confidence in this movie that shines through. There isn’t a lot of junk on screen, it’s been edited to be a lean and mean sci-fi film, and it keeps your attention from start to finish because of it. Despite being shot in a single location,the movie utilizes the specifics of Nathan’s house to great advantage. You always know where people are, how close someone else is, and whether that could put them in danger. The production design is stark and clean, as if decorated by the person who designs the Apple Stores, and the white lights and window walls add to an uneasy feeling of being in a house of horrors. Even the music only adds to the uneasy vibe; if I were forced to listen to it in a house like this, I might do what Caleb finally does one night (dun dun dun).

Domhnell and Isaac are excellent as Caleb and Nathan. Domhnell excelled in three films last year (Cavalry, Frank, and Unbroken), in three roles which couldn’t have been more different. Here, he’s the true star, the moral center that audiences will have a connection to, and our surrogate. But Caleb isn’t perfect, and the budding desire to “rescue Ava” from her father suggests even he has urges which are troublingly old-fashioned about sex and gender. As for Isaac, he is clearly loving being a weird mad scientist who is charismatic enough to get what he wants. While you will spend the entire movie thinking “this guy is trouble,” I never questioned Caleb’s earnest trust in his professional idol. 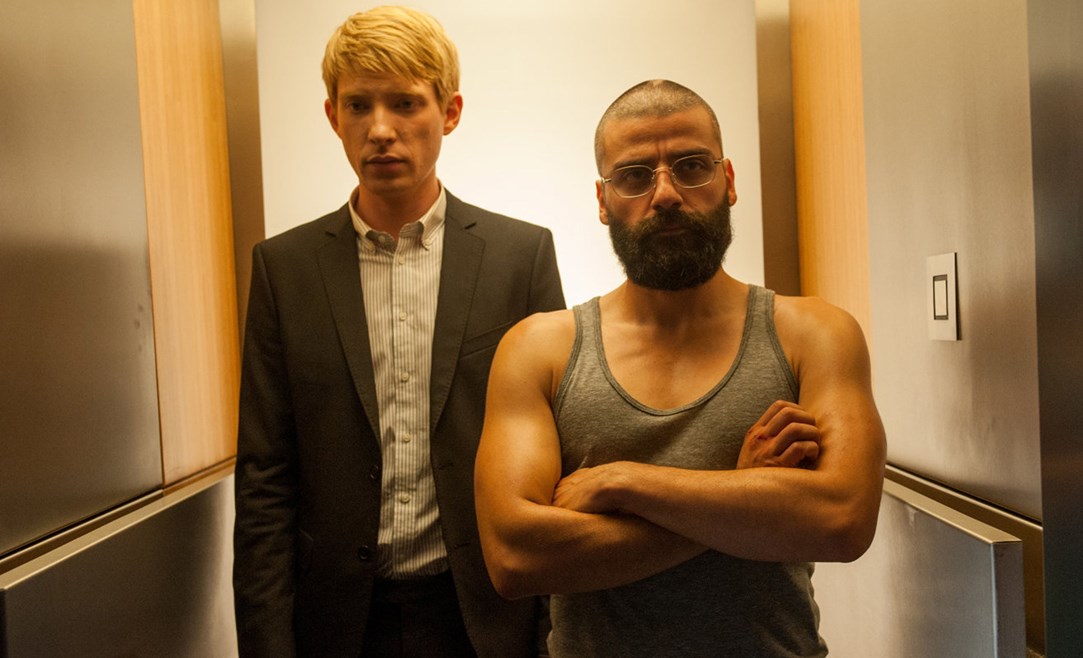 Alicia Vikander is an absolute find as Ava, with plenty of star potential. Not just because she’s angelic and beautiful, but also because of how layered you realize her performance really is after watching and understanding what she’s really been doing from start to finish. Physically, Vikander nails the newly-created Ava, being just mechanical enough to suggest she is a robot, but still maintaining a grace in her movements. Though she never breaks the rules and suggests a true humanity, Vikander manages to show emotions and thoughts – even if they’re not what you ultimately expect them to be.

I can’t write much more about this movie because of the twists and turns that the film has made a real effort to conceal; but let’s just say, even if you really like sci-fi genre films, Garland has a number of tricks up his sleeves that will surprise you in Ex Machina. To prepare you, it also includes some of his signature “horror” ending elements, which I know a lot of people hated about Sunshine (for the record, I do not). It will be interesting to see how or if people interpret Ava as a female, and if there is an consensus about what this film’s message is about women’s power over men, or about sex being a weapon. Ex Machina will certainly ignite a lot of discussion among viewers, and is pretty darn entertaining watch, with some big ideas hiding behind genre fun.