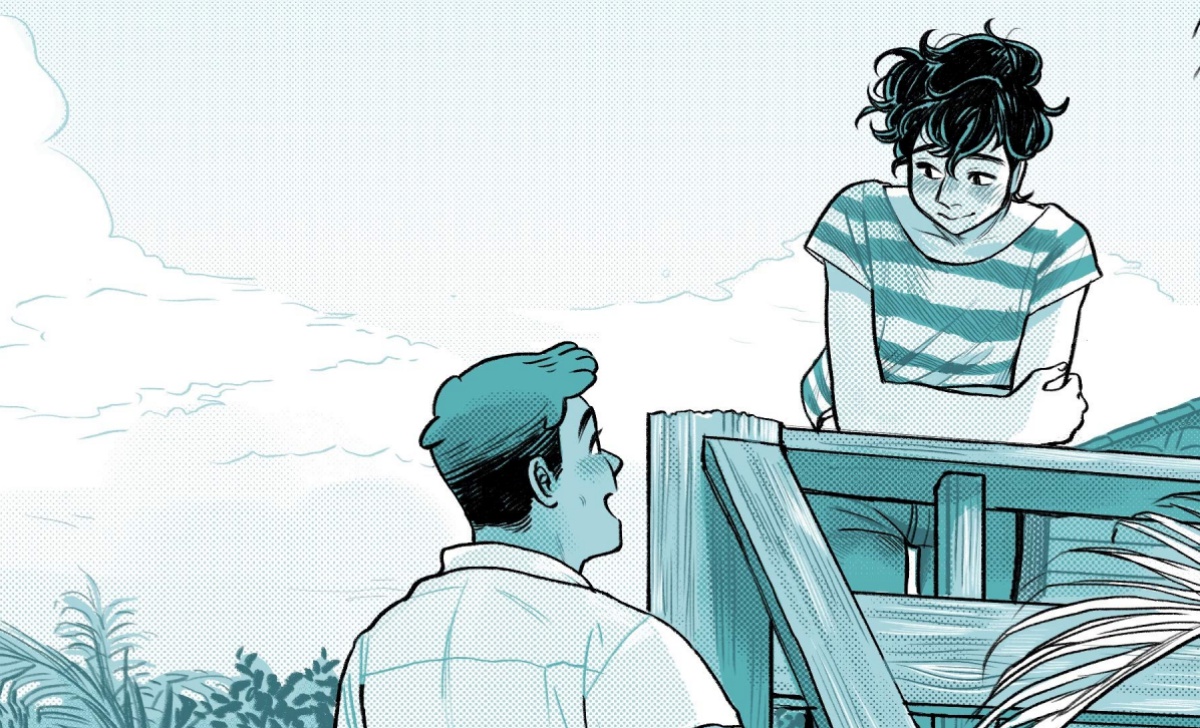 “…What does he think is going to happen? An angel will just fall from the sky?”

Ari Kyrkos has big city dreams of leaving his beach town life to move to the big city with his band, however, his family obligations have kept him uncomfortably tethered. The Kyrkos family bakery is struggling, and Ari would rather abandon ship than try and fix things, so he makes a deal with his family: if he can find a replacement to help look after the shop, then he is free to go off and achieve his dreams. Maybe?

Since I’ve been reading First Second, I’ve been super impressed by the LGBTQ content that the publisher puts out, and this year we are getting both Bloom and Kiss Number 8 (which comes out in March).  With Bloom, the collaboration between writer Kevin Panetta and artist Savanna Ganucheau, I was hooked at the preview image that showed Ari getting all red-faced watching Hector bake. 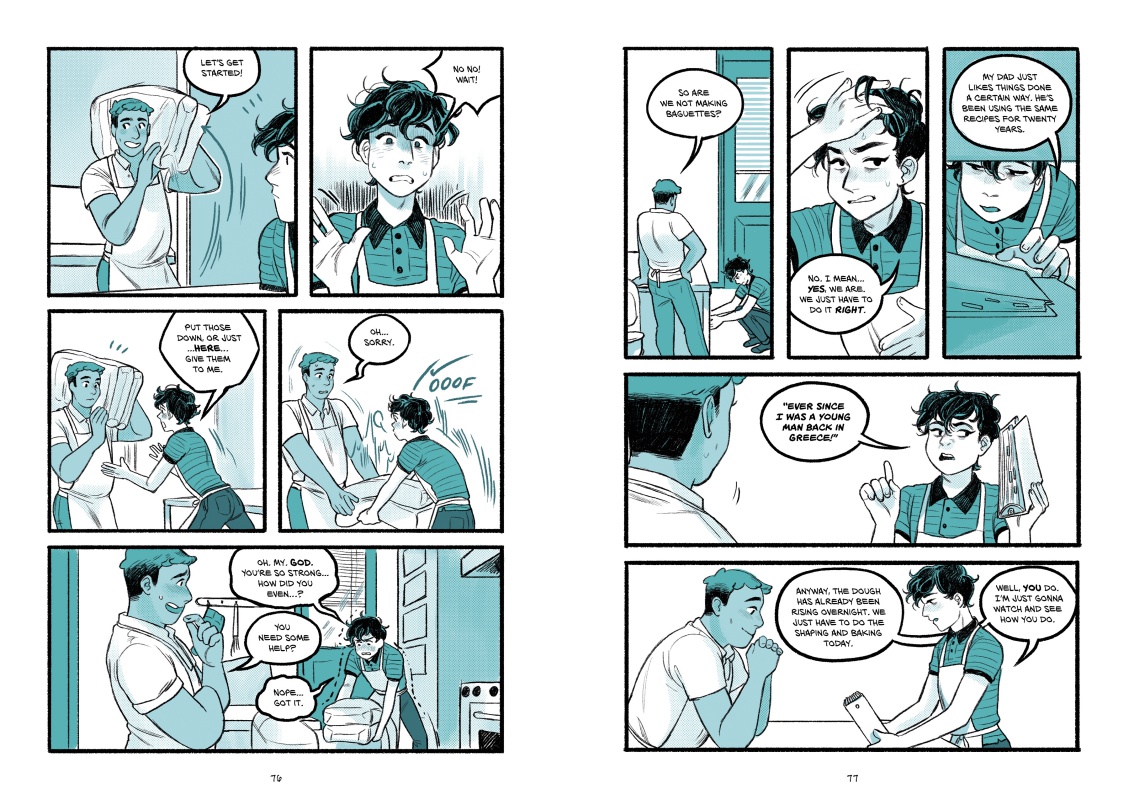 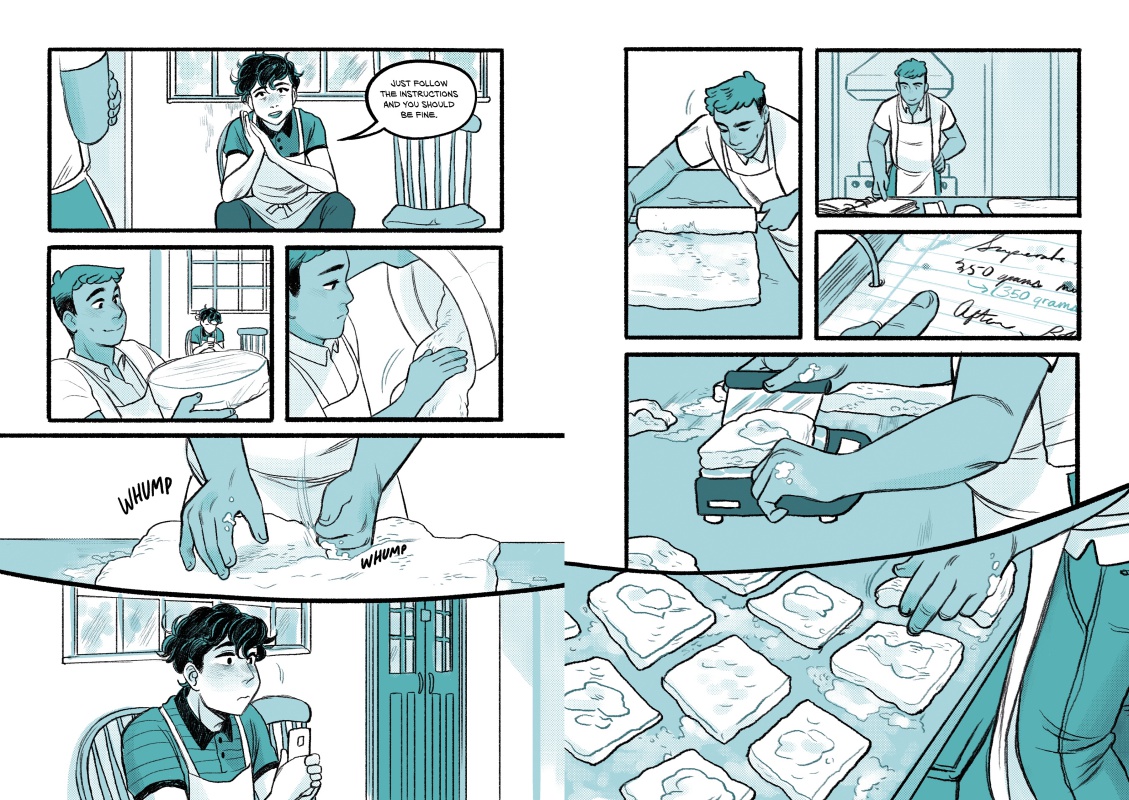 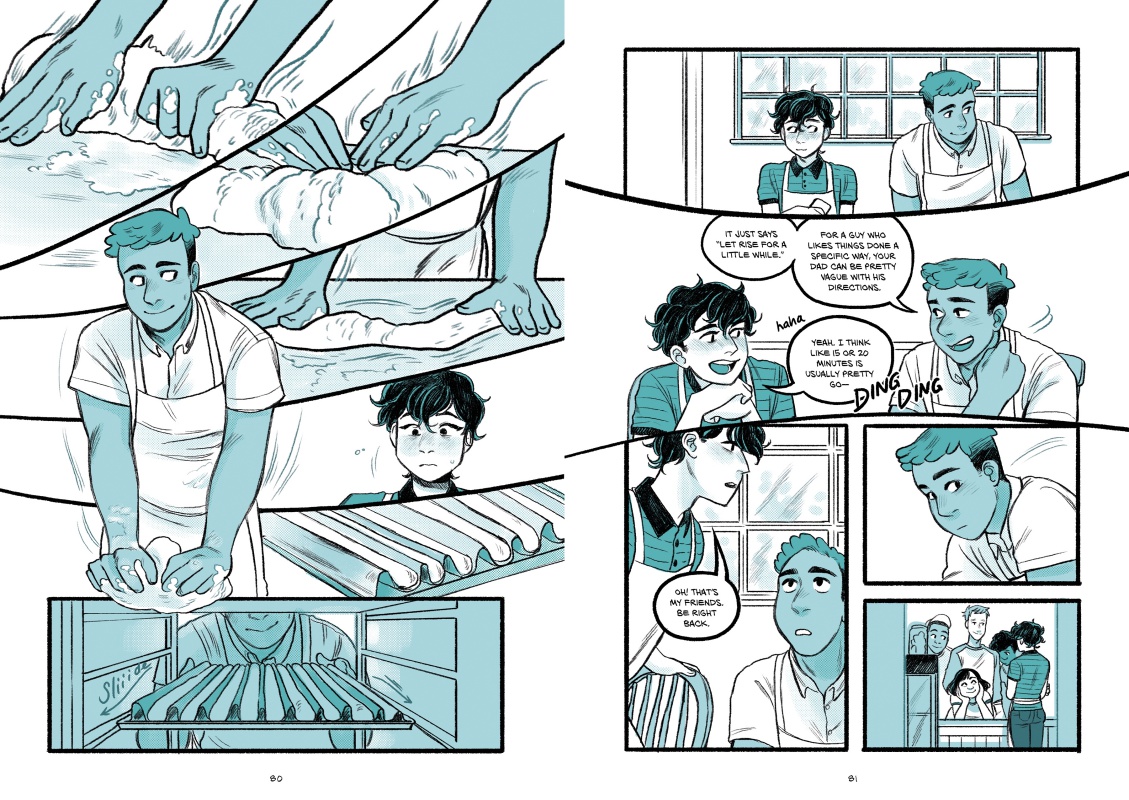 First of all, relatable, but secondly, the sweetness of the story really drew me in. Ari isn’t a sad boy, he is very a much an angsty teenager trying to figure out what he loves from life. He is deeply afraid of making commitments when it comes to every aspect of his life and it shows. With Hector, despite the attraction, he keeps them at arm’s length.

I really enjoyed Ari’s family. It is very rare that you have a story where people aren’t just super comfortably middle-class. Despite being business owners, they are an immigrant family that has put everything into a business that has to succeed for everyone’s sake and that means for Ari college is not a possibility unless he pays his own way. That kind of simple pragmatism is something I really enjoy seeing in fiction because that is a reality for many kids.

Hector is adorable and has the best dimples. He is originally from out of town, but comes to live in the area at his grandmother’s house as she’s recently passed away. He is taking a year off from school and attempting to escape some of the drama of an ex-boyfriend.

Their relationship has the typical slow-burn you’d expect from a romantic drama, but watching it unfold reminded me that we don’t see enough of these simple, sweet romances between gay kids. When the story begins, Hector is already out and has dated other guys, and while Ari isn’t “out” his sexuality is never treated as a big deal—it is just another part of his maturing into himself.

Savanna Ganucheau’s art is incredible, and she perfectly captures all the little moments between Ari and Hector that make their attraction not only vibrant but sweet. It all fits together seamlessly with Kevin Panetta’s writing to create a sweet summer romance that is the perfect chaser to this very chaotic January.

I got to speak with the creators, and I’d highly recommend checking out Bloom if you’re interested in a sweet romance between two adorable guys and love a little food with your romance. 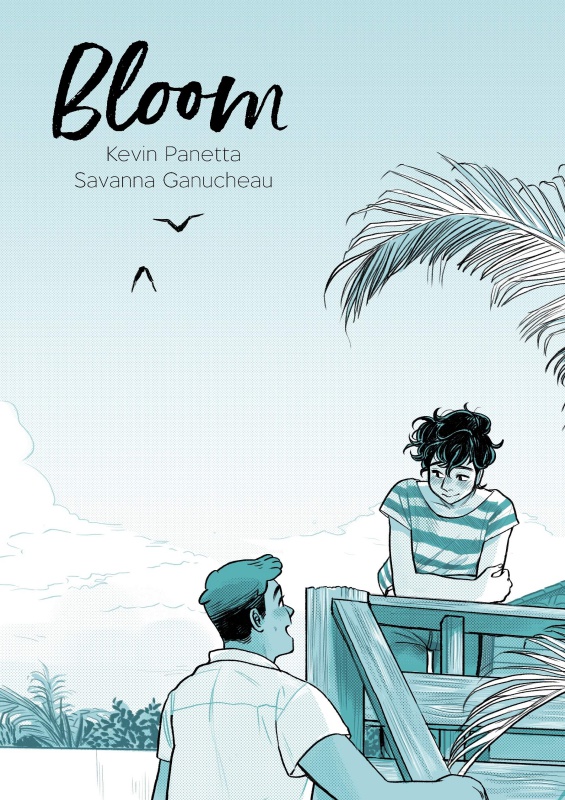 TMS: How did the initial concept for Bloom come together and how did the two of you find each other to work on this adorable project?

K: I actually do a comic, Zodiac Starforce, with Savanna’s sister, Paulina. We met through that and then found we had similar tastes in romance stories.

S: Yeah! We became friends and we wanted to do a story together. The idea for Bloom quickly came after that.

TMS: The story begins with Ari listening to music at his sister’s wedding, present but detached. With his friends, his family, and with Hector, there seems to be this fear of getting too involved with anything that radiates off of Ari. How did you balance his own coming of age story with this slow-burning romance with Hector?

K: At the beginning of the story Ari is a person who is afraid of deep connection and emotion. We knew he had to grow from there. Someone like Hector entering his life is exactly what he needed. The hardest part of balancing those two elements of the story was making sure Hector wasn’t simply a catalyst for Ari’s change. Hector is his own person and doesn’t exist solely to service Ari’s story. It was important for us to show that.

TMS: The Kyrkos Family Bakery’s famous sourdough rolls look super delicious (I have not been brave enough to try the recipes less I burn down my own kitchen). How many cooking shows did you have to watch to get all the great food art and how hungry did you get working on it?

S: I watched a lot of baking videos … and yes I was very hungry. I still have tons of playlists with random reference videos for Bloom. Most of the stuff I was interested in was the look and feel of the bakery, but it was definitely a learning experience.

K: I watched a bunch of videos and also baked all of the recipes shown in the book! I had probably already watched every season of the Great British Bake-Off anyway. I’ve been unknowingly preparing for this book my whole life!

TMS: The summer romance that blooms (lol) into something more is something that is so common in fiction, but I can’t think of many gay stories with that same theme. From the beginning did you know this was going to be a queer romance?

S: Yes for sure! Bloom was always a queer romance from the first character designs I did. I think it’s a shame we can’t say that queer summer romance is common in mainstream fiction. Hopefully people will be inspired by Bloom and do more!

K: We always knew we were going to do a love story, and the moment Savanna drew these two characters, there was never any question that it would be a gay romance story.

S: They were meant to beeeeeeee

TMS: Is there any chance we might get any more stories about Hector and Ari? I’d especially love to learn more about Hector.

K: The more we get asked this, the more we want to do a sequel! I think there’s a lot more to do with all of the characters in the book. I’m interested in Hanna and Jake, Ari’s parents’ backstory, and of course more Ari and Hector!

S: I’m so down to do more. I keep telling Kevin that if we don’t put Ari and Hector as the main focus people will riot. Hahaha

K: I want to explore the entire Bloom-iverse!

TMS: What are some of your favorite summer love stories?

S: I don’t know if it’s summer, but Whispers of the Heart always come to mind for me. The sense of place in that film and the calmness was a big inspiration for me.

K: Mine are mostly movies. Say Anything had a big influence on Bloom. I also love Dirty Dancing!

K: Are we really ending this interview with the words “dirty dancing”?

K: The sequel to Bloom is just going to be a rip-off of Dirty Dancing. Bye!

Grab your copy of Bloom here.