Review: Band of Robbers Is a Successful Coming-of-Age Comedy 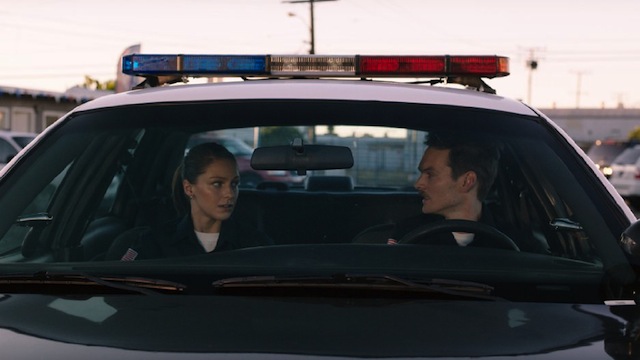 It’s January, and despite Hollywood’s insistence that it is a wasteland for movies after the awards season bloat, there are often little gems coming out at the start of the year worth seeing. The first of this year’s might be a little flick called Band of Robbers from filmmaking brothers Adam and Aaron Nee. Adam also stars as Tom Sawyer opposite Kyle Gallner as Huck Finn and Supergirl’s Melissa Benoist as Becky Thatcher. Yeah, this is a modern day story/sequel to the Tom Sawyer and Huck Finn books, now young adults in present day, but still troublemakers.

If the premise sounds a little strange, it is—at least at first. Any movie that liberally uses classic characters and literature is taking a massive risk because of the comparisons it draws, and while it takes considerable time to accept these two characters in such a new setting as adults, there’s something admirable and daring about taking on the challenge without making that the joke. Despite the adjustment period, the speed at which you acclimate to the film’s premise and appreciate it on its own merits is remarkably swift. It’s set in present-day Missouri, with fast-talking Tom now a cop (although a corrupt one) working with his more respectable older brother, Sid (Eric Christian Olson). Huck went from neglected, troubled child to ex-con just out of jail and back in town. Almost immediately, the two make plans to restart their thieving ways with childhood friends (Matthew Gray Gubler, Hannibal Buress, and Johnny Pemberton), but plans to rob a local con in town go bad when Tom meets his new partner, straight-arrow rookie cop Becky Thatcher. Thatcher isn’t Tom’s childhood sweetheart, but it’s still a case of love at first sight.

One of the interesting things about Band of Robbers is the fact that you can certainly enjoy the film without any previous knowledge of the Twain classics. Rather, there’s simply added humor if you do have that knowledge, which comes from seeing what they include, modernize, and outright change. Though it focuses on the same desire for treasure as Twain’s classic Adventures of Tom Sawyer, the film’s themes about dysfunctional friendships and accepting adult consequences provide genuine heart. The movie is surprisingly moving and insightful, despite the risk of it becoming nothing more than a “what if Tom Sawyer and Huck Finn were around today” comedy sketch.

There’s still the often tiring and overused trend of seeing movies about man-children on screen. I’m not someone who thinks that premise is completely worn out, but I do think it’s been too often underused in lazy ways in mediocre comedies that don’t consider that sadder elements of these types of co-dependent male relationships (Entourage and any Adam Sandler films provide perfect examples). These stories can be sad or hilarious, or often both, but there’s usually something behind them that suggests the character’s time has passed and something relevant to say about the specifics of male relationships. Surprisingly, Bad of Robbers does manage to say something compelling within this comedy-caper, thanks to some unexpectedly thoughtful writing by the Brothers Nee. The friendship of the five characters feels totally lived in, braised for decades with a dynamic set in stone long ago by children. The painfully close friendship of Sawyer and Finn, now so intertwined it has become almost toxic, draws from Twain’s stories of childhood, but also feels more personal here, perhaps benefitting from being a movie written by brothers.

If there is a movie this one seems to be borrowing from quite liberally, it’s probably Wes Anderson’s first feature, Bottle Rocket. They have visual similarities—the blown out, bright natural landscapes, the caper element, and the dynamics between childhood friends coming of age as young men too old for this behavior. Bottle Rocket’s Dignan and Anthony probably weren’t inspired by Tom and Huck, but I wouldn’t be surprised if it were the Nee brothers’ favorite Wes Anderson movie. Personally, I would tend to agree. Adam Nee is perhaps more successful than even Owen Wilson was at projecting the leader-of-the-pack mentality that would convince grown adults to go on the lam; he makes for a very charming scumbag, and fine actor Gallner is excellent in the more internal role as Huck. All the comic actors make for delightful and believable friends, but special kudos go out to stand-up Hannibal Buress, whose work in this and Broad City proves that he is a far better actor than Hollywood seems to appreciate, often reminding me of a young Charles Grodin in his deadpan delivery. Although she has a relatively small role as Becky (but one in which she manages not to feel underwritten as just “the girl”), Melissa Benoist is as charming as she is in Supergirl and has genuine chemistry with Nee.

Band of Robbers is unlikely to find a massive audience, especially coming out in January the day after the Oscar nominations, but it is a film wort seeking out, in theaters or on-demand, if you’re at all interested in a small-scale, funny, and unexpectedly touching comedy—especially if you like films like Stand by Me, Bottle Rocket, or Breaking Away. The fact is that those are some of my favorite films of all time, and the fact that I got the same feeling watching this movie really does show filmmakers can still make them when there are thoughtful minds behind them. Don’t be surprised to hear more from the Nee brothers in the future, especially if Adam Nee continues his fine work in front of the camera as well. They clearly are a talented duo.