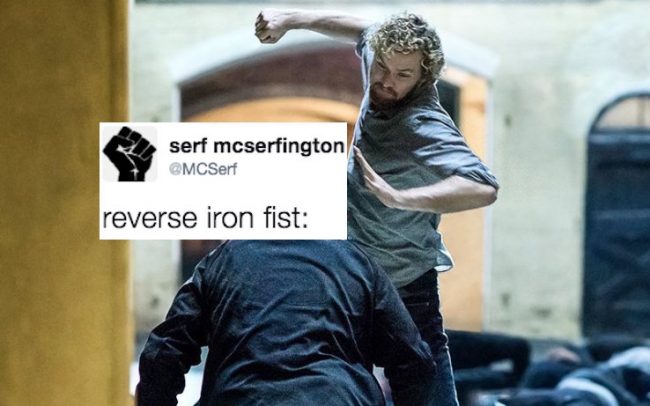 We’ve been reporting on Iron Fist for a while, and with the show’s recent debut things heated up: first, critics savaged it as wooden and boring; then, star Finn Jones engaged in a seeming campaign to see how much of his foot he could fit into his mouth. Now, this single tweet is the one thing I want to think about regarding Iron Fist: how much better it would be in “reverse.”

Over the weekend, much of my social media was filled with disdain for Iron Fist—not disgust so much as “Really, Netflix? Who wrote this script? And why?” But instead of calling out the existing show, the Twitter account @MCSerf articulated the perfect solution.

reverse iron fist: a chinese girl's plane goes down over the texas wilderness. she returns years later with the mystical art of gunslinging

Yes. We get the POC hero the show deserved in the first place (bonus points: she’s a lady), a sardonic spin on the “mysterious arts of X foreign culture” trope, and also, can we just imagine how badass this scenario would be?! Responses on Twitter were equally enthusiastic.

@MCSerf As several hundred other people have probably said to you: I would so watch that.

@MCSerf Bonus: She gets to teach or correct the white cowboys on how gun slinging & horse riding should be done.

Netflix, if you’re reading this, CALL US.