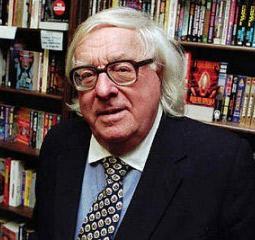 The family of Ray Bradbury announced this morning that the author died peacefully last night after a “lengthy illness.” The man behind Fahrenheit 451, The Martian Chronicles, and The Illustrated Man was ninety one.

If I had to make any statement, it would be how much I love and miss him, and I look forward to hearing everyone’s memories about him. He influenced so many artists, writers, teachers, scientists, and it’s always really touching and comforting to hear their stories. Your stories. His legacy lives on in his monumental body of books, film, television and theater, but more importantly, in the minds and hearts of anyone who read him, because to read him was to know him. He was the biggest kid I know.

If you’re looking for other ways to remember Bradbury and his work, Karapetian has a suggested passage from The Illustrated Man.

And if you’re the sort of person who prefers humor in greif, you might want to revisit last year’s Hugo Award nominated short film, “Fuck Me, Ray Bradbury.”

Said Rachel Bloom, creator of the video, of Bradbury:

I would say very earnestly that I am overwhelmed with how well he combines such mind-blowingly cool ideas with the realism of how humans deal with these ideas,” she told Booktryst. “That’s what struck me especially about Martian Chronicles or The Illustrated Man…. I found myself as emotionally engaged as I was mentally. If I really met him, I would be nothing but respectful and probably like the 12-year-old boy I secretly am inside.

So long, Mr. Bradbury, and thanks for all the fish.