Resident Evil 6 Movie Release Date Revealed, Will Probably Be Set In Space Or Something 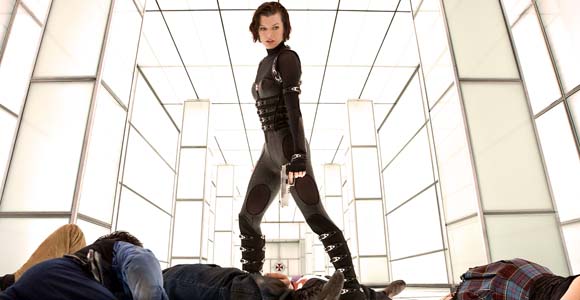 I never say this but…I think it’s time for a reboot.

Confession: I’ve seen all of the Resident Evil movies in theaters. Shut up. I have a long-standing love affair with Milla Jovovich.

That aside, I’m not blinded by my love. What started off as a decent take on the famous video game has devolved into a rotting corpse. The last installment, Resident Evil: Retribution, brought to life some of our favorite characters from the video game franchise, and brought dead characters back to life, but failed to deliver as a movie in any way. So you can understand my dismay at hearing they are going to attempt another.

Sony/Screen Gems will bring us Resident Evil 6 (no, not based on that exact game) on September 12, 2014. Empire writes, “While there’s no confirmation yet that the franchise’s director and star will be rejoining, it’s reasonably safe to assume that Paul W. S. Anderson and Milla Jovovich will sign up soon for another crack at the dastardly Umbrella Corporation.”

I guess you can blame me since I helped contribute to the worldwide box office of over $221 million dollars that gave them the idea it was worth it to make another one. But honestly, I’ve thought it was time to shut down and retool for a while now. Video game adaptations rarely leave fans happy but it would be interesting to see them try and follow them a bit closer next time instead of letting things get too outrageous. I mean, the films were already down that path but Retribution literally left Alice at the White House with flying zombie dragon looking things surrounding it. I just…stop.